A Quick Word:
With billboards posted throughout the city, I always wondered where Quay was and how good their food could be.  The restaurant is located just minutes from Navy Pier and a few blocks from the Mag Mile.  It is a little bit of a trek, but their prices definitely make up for the distance.  We dined at Quay for Mother's Day brunch and were greeted by an empty dining room.  Thankfully, after a few minutes, the dining room started filling up... I guess we were a few minutes early.  Anyway, the menu is filled with a large variety of breakfast dishes (and I checked out the dinner menu and noticed a similar assortment).  The prices were extremely FRIENDLY, even for budget-minded students.  Unfortunately, I don't think any of the dishes were perfect or close to memorable.  Some were delicious, but still lacked that extra effort to make it amazing.  For that reason, I could only give Quay a 3.5 mile rating. 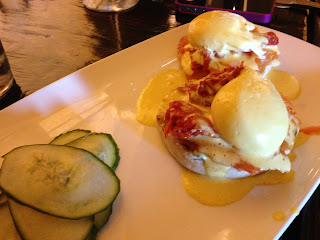 For brunch on Mother's Day, my mom looked through the menu and was instantly stuck on the smoked salmon eggs benedict.  This dish is comprised of two english muffins topped with house smoked salmon, oven roasted tomatoes, pickled red onions, two poached eggs, and of course, a rich hollandaise sauce.  Just imagine a typical eggs benedict that is kicked up a notch with smoked salmon.  The pickled red onion added the acidity and along with the sweetness from the tomato, this dish was great.  A side of sliced cucumber accompanied the dish rather than starch making for a light start to the day. 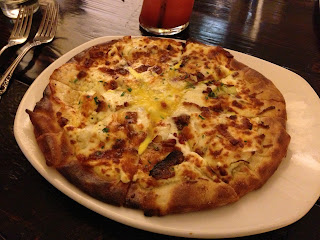 I tend to see what all my family is ordering before I choose my dish.  After hearing all of their choices, I decided the only other entree that seemed appetizing was their breakfast pizza.  This thin crust personal pizza was topped with fresh mozzarella, applewood smoked bacon, a creamy sauce, and an egg cracked in the center.  Everything is melted together and oozing with rich flavors.  The cheese is a little on the heavy side so just be aware.  Plenty of bacon flavor throughout and the crust is nice and crispy.  I would definitely order it again. 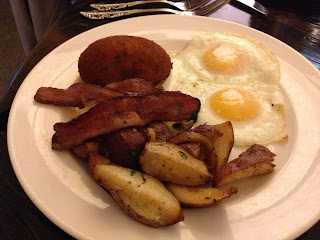 One of the more southern dishes was the chicken hash.  This is no orderly hash as my older brother soon found out.  Rather, it was a crispy chicken and potato hash CAKE aka a croquette.  It was served with two eggs, applewood smoked bacon, and home fries.  The hash cake was actually amazing.  I personally love croquettes so this was essentially a croquette on steroids.  The only unfortunate part about the dish was the lack of chicken.  The croquette was majority potato.  Also, the home fries were simply over roasted potatoes with a little seasoning.  Nothing special... but not bad. 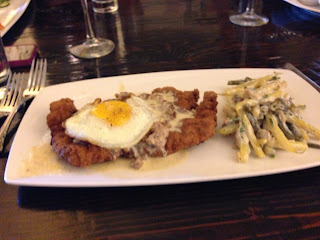 My dad took the best country or southern dish offered.  The country fried steak is a steak pounded thin, lightly breaded, and pan fried to a crisp.  It was topped with a sausage gravy and a fried egg and served with a green bean salad.  The steak was not as tender as I would have liked despite being pounded to death.  But the gravy did add some great flavor to the meal.  I really enjoyed the bite of green bean salad I tried.  This dish was a bit on the smaller side... maybe a starch should be added? 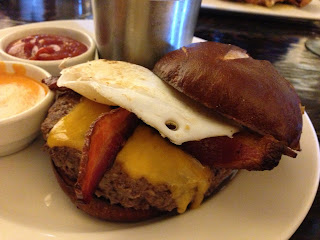 My little brother immediately claimed the burger option at Quay.  His prime beef patty was cooked medium and served on a pretzel bun.  It was topped with a fried egg and applewood smoked bacon to give it that breakfast feel.  Aged cheddar cheese was also added.  The size of this burger was huge... the pretzel bun was once again key in differentiating this great burger from an OK burger.  The cheese wasn't sharp (disappointing), but the egg... that added plenty of richness with the liquid yolk.  It came with a side of french fries. 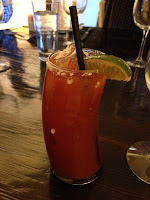 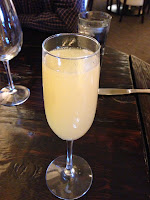 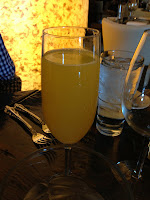 For Mother's Day, we convinced my mom to get a brunch time cocktail.  And rather than having her drink alone, one of my brothers and I also ordered a drink.  I chose the bloody mary which was served spicy but a little salty for my liking.  My mom had the bellini which was peach flavored and she said delicious.  And my little brother a mimosa just to get that orange juice feel.  There drinks are a little on the stronger side so I can't complain.

The DOs/DON'Ts:
DO:
- Brunch menu is reasonably priced.  Menu online is nothing similar to restaurant menu.

DON'T:
- If you want to be in the more mainstream area, don't come eat here.  It is a bit of a trek from the shopping areas of Michigan Ave.
- Don't come during non-peak hours... you may be the only family/people in the restaurant.

Posted by Joseph Esparaz at 8:42 PM