A Quick Word:
Every once in a while, I decided to try a restaurant mainly because I have driven by the place several times.  This happens to be the reason I decided to try Kentone's Drive-in.  Upon entering, I was overwhelmed by their extensive menu.  From breakfast food to classics, like hot dogs and polish sausages, Kentone's doesn't lack options.  There was an interesting crowd... construction workers sitting next to a gentleman in a suit and another family with a few kids running around.  The restaurant is very clean and well lit.  When it came to the food, however, everything seemed simple.  It appears they don't try to change classics, but they also messed up some Chicago traditions (the Chicago style hot dog).  Also, it also tasted as if the food is frozen and just warmed or fried to order.  Basically, I am trying to say I could only rate them 2 miles because I feel like I could make all the food at my apartment... and I could probably make it better. 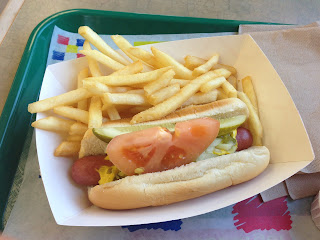 After a long day of no eating, I was craving a Chicago style hot dog.  I remembered a restaurant on 18th street and it happened to be named Kentone's.  This "drive-in"-like restaurant (despite not actually having drive up service) had a reasonably priced hot dog that came with french fries.  At $3.50, I wasn't sure if I should have great expectations or keep them low.  I should have done the latter.  When my food was ready, I received an IMITATION Chicago style hot dog.  First of all, the steamed bun was non-existent and so were the sports peppers.  The relish wasn't neon green and the proportions were just off.  I was extremely disappointed in the Chicago style aspect, but overall, the vienna beef hot dog was still tasty.  Also, their fries were cooked to order making them piping hot and crispy, which I enjoyed.  I probably won't be back for this hot dog unless they make it more authentic.

The DOs/DON'Ts:
DO:
- They close at 4PM on weekdays which is strange.  Definitely be aware.
- They have a parking lot which is a great amenity for the customers.

DON'T:
- I don't recommend the Chicago style hot dog.  It falls short in many ways. 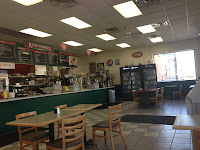 Posted by Joseph Esparaz at 7:45 PM