A Quick Word:
Farmhouse is one of those restaurants trying to bring the rural concept to the city.  They feature many heart warming, homemade dishes that are "fit for a farmer's appetite."  From craft beers to high quality meat, Farmhouse also prides themselves in sourcing from local breweries and farmers.  I heard such great reviews about this restaurant, specifically their steak... UNFORTUNATELY, there were way to many problems in most of the dishes and it was... plain and simple... not that good.  In terms of atmosphere, a dimly lit, extremely warm restaurant was disappointing.  A lot of their chairs are bar stools that are uncomfortable and the recycled wood table kept falling apart.  The food was hit or miss, with the burger being Farmhouse's saving glory.  If it wasn't for the burger and the flatbread appetizer (special), 2.5 mile rating would probably be a stretch. 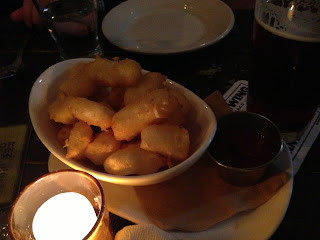 How can anyone mess up deep fried cheese curds?  I find it difficult, but not impossible.  In fact, Farmhouse came close.  First the pros... They served wonderfully cooked cheese curds.  Each was lightly battered and quickly fried.  They weren't as oily as I expected and had just enough crunch to provide a textural component to a dish of melted cheese.  Now the cons...  they almost messed up cheese curds by serving it with a homemade ketchup (their Alder Smoked Catsup).  This may be the most disgusting ketchup I have ever eaten.  I understand that it is not the processed kind Heinz serves, but this reminds me of a red sauce flavored with liquid smoke and a lot of it.  There was no sweetness or tanginess... it was just liquid smoke.  No one enjoyed this catsup and all requested to have it removed from their burger.  Just ask for a side of mustard or eat the cheese curds plain.  You will be thankful. 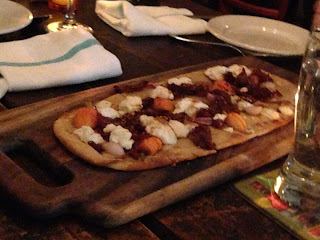 Our waitress explained how they have a rotating whole wheat flatbread that changes based on the ingredients available at the time.  Ours had short ribs and goat cheese and was a solid appetizer to share.  It is cut into eight pieces, but I suggest ordering a flatbread for every four people.  Beyond that, you only get a small taste.  The goat cheese and short rib combo was delicious.  The cheese didn't melt, but still had the typical creaminess and tanginess.  The short ribs were extremely tender and cooked almost in a BBQ like sense.  The crust was nothing special, but it didn't take anything away from the meat or cheese.  I really enjoyed the flatbread and would recommend trying it. 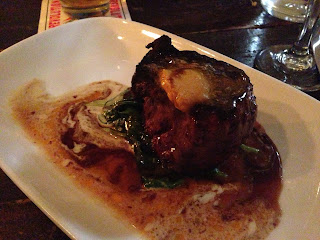 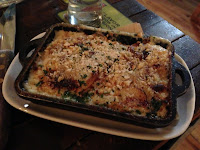 Having heard amazing reviews about the Farmhouse steak, I already knew what I had to try even before arriving at the restaurant.  Listed as market price, I was a little hesitant, but still ended up ordering the grass-fed steak requested as medium rare.  It came on a bed of creamed spinach and had red wine reduction sauce.  A smoked paprika butter was placed on top and melted down the sides of the steak.  Baked yukon gratin potatoes were served in a dutch oven-like side dish.  First of all, when concerning the steak, everything was poor.  The temperature was cooked closer to medium well than medium rare.  The overcooked steak was not even mildly tender for being a filet.  Furthermore, there was absolutely no seasoning... not even salt.  All I could taste was a burnt, charred crust that overwhelmed my palate.  My feelings towards the steak was confirmed by one of my brother's friends who also ordered this entree.  The butter was nothing special, adding absolutely no additional flavors, and the creamed spinach was essentially just wilted.  The baked yukon gratin was extremely bland and served at such a hot temperature that it will burn the inside of your mouth.  Honestly, I can't remember having a steak this bad... except for maybe the Ponderosa near Disney World.  I do not recommend at all. 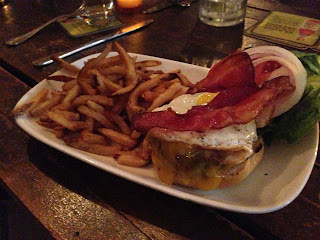 All of my brother's friends and both my brothers chose to create their own grass-fed burger.  Served on a grilled kaiser bun, one of the combinations included bacon, a fried egg, and their choice of cheese.  Others chose fancier combinations from the extensive list of ingredients that included shaved ham, pickled peppers, and much more.  It came with homemade mustard, mayo, and catsup.  I have the same feelings for the catsup as I explained above (horrible), but the mustard and mayo was quite a surprise.  They helped make the fries even better.  The burger, like the steak, was overcooked.  One of my brother's friends was smart and ordered his rare... leading to a perfectly cooked medium rare burger.  So I would definitely take his advice and order one step rarer than you like.  The bun was a little on the soggy side.  Maybe consider a pretzel or brioche bun?  Other than that, I really enjoyed the couple of bites I tried, probably because of the added richness from a fried egg's yolk.  I recommend adding that ingredient to your burger. 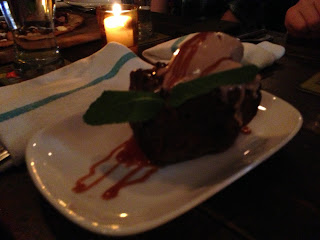 This rarely happens, but I honestly cannot remember what the dessert was called or what was part of it. I do remember we ordered dessert first and that is probably why I forgot everything about it.  Anyway, Farmhouse has a rotating menu of desserts.  We tried the chocolate cake, an apple pie dish, and also the bread pudding.  I was unable to snag pictures of all, but they all do the job when you are craving something sweet.

The DOs/DON'Ts:
DO:
- If you end up coming here, definitely drive over and park on the street.  It is deceivingly far from Michigan Avenue.
- Have the temperature of the beef cooked more on the rare side... Everything I tried was overcooked unless ordered at one temperature more rare than requested. (If you want medium rare, order it rare.)

DON'T:
- Stay away from the steak unless you want bland chunk of somewhat tender meat.