A Quick Word:
Numerous Irish pubs line the streets of downtown Chicago.  Unfortunately, I haven't tried to many.  One of my friends had a gift card to Emerald Loop and was willing to take us all out to lunch (thanks!).  Anyway, Emerald Loop is located just off Wacker Drive and is difficult to find, unless you are looking for it.  Once inside, you encounter a huge restaurant and bar with plenty of televisions and tables for their customers.  In fact, I would expect this bar to be great for sporting events.  When concerning the food, there is an extensive menu ranging from traditional Irish cuisine to more pub friendly burgers and sandwiches.  Unfortunately, the extensive menu doesn't mean all the food is going to be great.  Personally, I found the burgers to be extremely overcooked.  Their sides were good and their portion sizes were incredible.  But because of how they fell short in most of their dishes, I decided on giving them just an average rating of 3 miles. 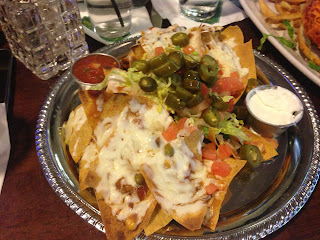 We all decided to share an appetizer.  We chose the Pub Nachos which can either be served with a meat chili, chicken, or a vegetarian chili.  They melt mozzarella cheese on top of the nachos and top it with a healthy helping of pickled jalapeños.  It also comes with a side of salsa and sour cream.  We had a bad experience with ordering these as an appetizer.  They forgot to bring them out and eventually brought them to us after having a few bites of our burgers.  These weren't anything special.  Just a pile of nacho chips topped with beans (their vegetarian chili) and the normal nacho toppings.  Don't expect much. 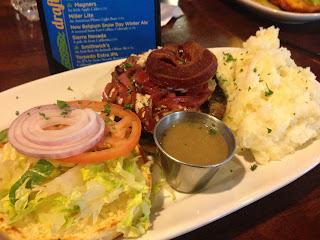 After a long thought, I decided on getting a burger... the Crazy Twist one specifically.  I requested the burger to be cooked medium rare.  It was topped with goat cheese, crispy pancetta, pickled onion, and a mushroom aioli.  Mine was served on a typical hamburger bun and served with lettuce, tomato, and onion.  Rather than fries, I chose to have mashed potatoes and gravy as my side (for no additional cost).  My burger was definitely overcooked.  It was more on the medium well side than the rare.  I was extremely disappointed about this.  The toppings were delicious, but an overwhelming amount of goat cheese was used.  It out shined all of the other toppings, especially the pancetta and the pickled onions. I think they either need to add extra pickled onions or reduce the goat cheese; I would prefer the latter.  The mashed potatoes were excellent.  They are on the chunkier side and well seasoned.  They are served with a side of gravy, which adds an amazing saltiness to the already delicious potatoes.  Its hard for me to say, but the potatoes were the highlight of my meal. 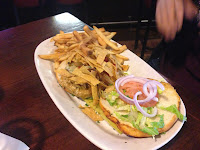 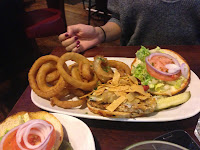 Two of my friends ordered the New Mexico style burger, but rather than meat, substituted for the veggie patty.  The New Mexico creation was topped with roasted peppers sauteed onions, tortilla strips, pepper jack cheese, chipotle mayo, and of course the typical lettuce, tomato, and onion.  All these great toppings were stuffed inside a tomato focaccia bun (an excellent substitution to the hamburger bun I received).  I was able to snag a bite the burger which was nothing special.  I couldn't really make out what the burger was made from, but it served its purpose.  I enjoyed the toppings and the bun more than the veggie burger patty itself.  For and additional $2.00 charge, one of my friends substituted their side of fries for onion rings.  These beer battered onion rings were incredible.  It came as a huge side order with more than ten deep fried rings.  I wish they had a special aioli for them.

South of the Border Veggie Burger 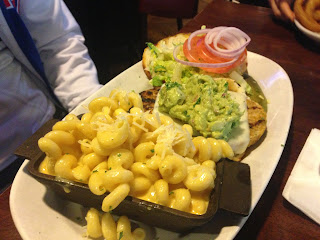 My roommate decided to make the South of the Border burger vegetarian friendly.  By doing so, he had the burger switched for the veggie patty, the bun switched to the tomato focaccia, and the chorizo removed.  What remained was a veggie patty topped with mozzarella, guacamole, and a chipotle mayo.  I was a little confused with the choice of mozzarella rather than a nacho cheese or a Mexican blend, and was unsure what it added to the burger.  My roommate really enjoyed the burger.  Rather than having fries, he also opted for the $2.00 substitution, but chose mac & cheese for his side.  Their mac & cheese is made with cavatappi noodles, a mild cheddar, a Wisconsin sharp cheddar, and parmesan cheese.  I didn't really have much of a bread crumb topping which I tend to like.  The mac & cheese was on the soupy side, which I also enjoy rather than the thick version that some places offer.


The DOs/DON'Ts:
DO:
- The portions are huge... if ordering burgers, no appetizer is necessary.
- I highly suggest ordering the mashed potato as the side for no extra cost.

DON'T:
- Definitely DO NOT drive.  There is minimal parking.  In fact, we walked over four blocks  after luckily finding a parking space.  And, it is $6.50 an hour on the street... ridiculously expensive.

Posted by Joseph Esparaz at 8:41 PM