A Quick Word:
Crisp has become known as one of the best Korean Wing places in the city.  Their special frying technique makes their chicken skins crispier and more savory than others.  They create homemade sauces that combine both America's favorites with incredible Korean flavors.  I can now see why everyone raves about Crisp's wings.  Not only are their wings incredible, they are somewhat affordable for students.  They have lunch specials that will fill you up and leave your wallet full at the same time.  The only problem was the set up of the restaurant.  I was disappointed with the very minimal seating with just a handful of picnic-style tables and a couple of bar stools near the window.  It gives an uneasy feeling when arriving, especially if no seats are available because people are too shy to share tables.  Luckily, we don't have that problem, and were willing to sit next to a couple of strangers and share the same huge roll of brown paper towels (much needed).  I wanted to give them a perfect rating, but because of the seating arrangement, I decided a 4.5 mile rating was fair for this amazing chicken!

(Be careful if you have a sesame seed allergy... they like to garnish the wings and the rice with them.  You know who you are. lol.) 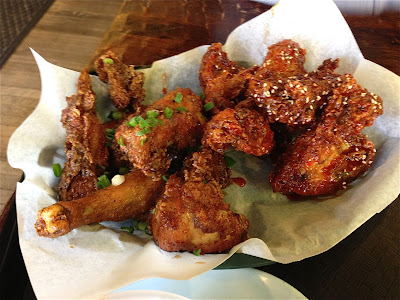 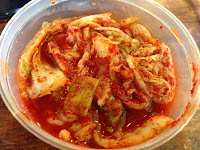 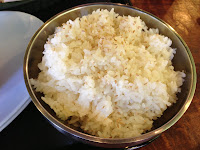 Upon arriving at the restaurant, my friend and I saw a huge sign advertising Crisp's weekday special.  A whole chicken is deep fried using the same technique they fry their wings and served with up to 2 different sauces.  It also came with your choice of two sides and two drinks (either soda or water).  All of this for just $20 or ten bucks per person.

We chose to have 1/2 the chicken in the Seoul Sassy sauce (pictured on left), which is a sweeter sauce with plenty of soy sauce, garlic, ginger, and other secret spices.  It was delicious and very unique... some pieces of chicken had more of a spicier profile, while others a sweet one.  The contrasting flavors kept drawing back to this sauce, rather than the other one we ordered.  It was sprinkled with chopped scallions.

Crisp BBQ sauce (pictured on right) was the choice for our other 1/2 of a chicken.  They like to describe this sauce as a Korean-American fusion BBQ sauce that has a little spice, a little sweet, and a little smoke.  Personally, I didn't get all those flavors... I experienced more smoke with a little spice.  Don't get me wrong, it was still another great sauce... I think I was just looking for that contrasting sweet taste that was present in the Seoul Sassy sauce.  My buddy really enjoyed this sauce more which was great because I liked the other one better.

For our two sides, we chose cabbage kimchee and white rice.  The rice is a huge portion and can definitely be shared by two people.  The kimchee had two choices... cabbage or radish.  I prefer the cabbage and my buddy didn't care.  It was good.  It had that homemade feel with some pieces being spicier and more fermented than others.  It wasn't like the store bought kind that every bite is exactly the same.  It added somewhat of a refreshing taste to the meal.  Highly recommend.

The DOs/DON'Ts:
DO:
- When first arriving, there will most likely be a line.  Just grab a menu and sift through all the great choices while you wait.  If you see someone stand up at the table, have one of your friends grab the seat because there is very limited seating inside the restaurant.  After ordering (the chicken!), just have a seat and wait for your name to be called.
- REMEMBER TO SAVE SEATS EVEN BEFORE ORDERING.  IT GETS PACKED FAST!
- Plenty of street parking is available.

DON'T:
- Stick to the Wings.  They are that unbelievable and I don't want you missing out.
- Don't use any of the extra sauces at the table.  They are delicious, but are not needed. 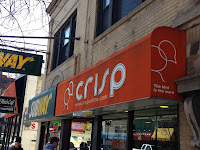 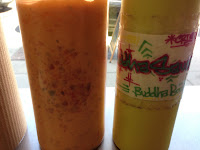