A Quick Word:
Phoenix restaurant is located in an awkward place... in between new and old Chinatown.  This restaurant, which is on the 2nd floor, has become famous for not only their dim sum and their Peking duck, but also for being tourist friendly.  During breakfast hours, only a few dim sum carts roam the dining room.  Instead, you are able to order off a visual menu, making each dish "made-to-order."  Unfortunately, the price of the dim sum at Phoenix is significantly higher than most of the dim sum restaurants in Chinatown.  Also, their menu is extremely limited compared to the others.  They lack the famous "soup dumpling" that has taken America by storm.  When it comes to the Peking duck, as you will see below, the dishes they make with duck meat are delicious, but not as authentic as I have had in the past.  For these reasons, I decided to give Phoenix just a 3.5 mile rating. 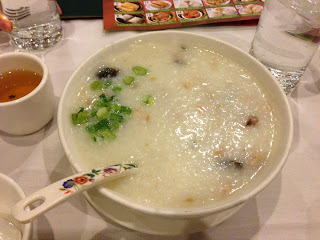 One of my favorite foods as a child and still today is congee or the Filipino version of the dish.  My mom makes the best congee, especially as a substitute  for chicken soup on a cold winter day.  The congee from Phoenix is an a rotating schedule, with the added ingredients changing.  This time, there were cubes of pork and a nice generous helping of chopped up century egg.  The rice porridge had a consistency as if the rice was pulverized with an emersion blender.  The century egg or "black egg" gave the dish a creaminess since most of the yolk mixed into the soup.  The gelatinous egg white (now black) had most of the salty taste associated with century eggs.  Definitely order this congee, especially for breakfast or a great starter for dinner.  It is a huge bowl with enough to serve a minimum of 5 people. 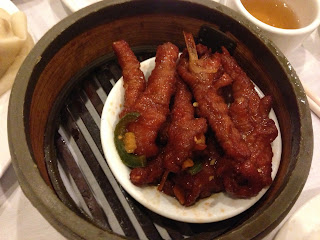 My dad and I love ordering chicken feet at dim sum restaurants.  They are difficult to eat, but if you decide on ordering them, just bite off one of the digits and suck most of the cartilage and skin off the bones.  The chicken feet here are cooked in some kind of sweet red sauce.  Unfortunately, it was a smaller portion that I am used to and also it wasn't as fresh as some of the other dim sum dishes we tasted.  Some of the claws were left on which was disappointing.  Probably wouldn't order them again at Phoenix. 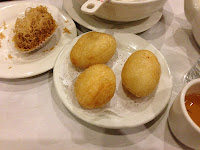 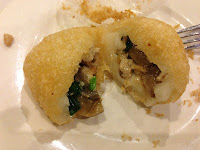 This is my mom's favorite from Phoenix.  So, my friend and I decided to order it.  The minced chicken dumpling also has a few minced vegetables mixed in.  This mixture is stuffed into a rice dumpling that is deep fried upon ordering.  The rice consistency is incredible -- it has a great chew and the crispy outside provided a contrasting texture.  The inside mixture wasn't very flavorful and had an overpowering oily taste that gets old after the first bite.  These arrived at the table piping hot, which is one of the positives for ordering dim sum rather than choosing it off a cart. 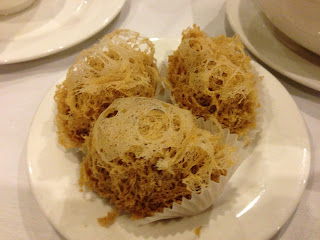 The deep fried taro is one of my other favorite dim sum dishes.  It has simple ingredients (taro, breading, cubes of dried pork), but is extremely difficult to make.  The ingredients are rolled into elongated sphere shapes and then deep fried.  The technique is difficult, thus making the dish not appear on all dim sum menus.  Anyway, the consistency is probably the best part about the dish.  Think mushy like mashed potatoes with the lightest-airiest crust.  The dumpling is surprisingly rich so share these... 1/2 to 1 dumpling is plenty per person. 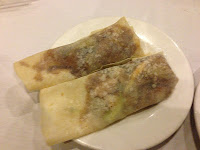 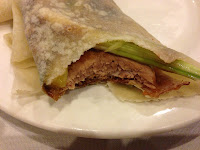 The peking duck appeared to be one of the famous dishes of Phoenix.  Almost all the surrounding tables had a duck on their table, so we decided to do the same.  The duck comes out whole and one of the workers carves the duck in front of your table.  Next, they form the mandarin pancakes filled with large slices of duck breast, a couple strips of crispy duck skin, a slicer of cucumber, whole scallions, and a hoisin sauce.  The duck had amazing flavors with that game flavor definitely standing out.  It had a nice sweetness from the hoisin sauce and a crispiness from the duck skin.  The skin packs so the most flavor, so definitely try some separately.  Make sure not to have too many scallions placed because the sharp, onion flavor is overwhelming.  The dish makes around 8 or so of these duck pancake wraps.  So there is plenty to share... In fact, for my friend and I, the embarrassing part was we ordered a duck for us two, while other tables had 8 or 9 people to a duck.  At this point, we obviously realized we order too much food and would have left overs to take home. 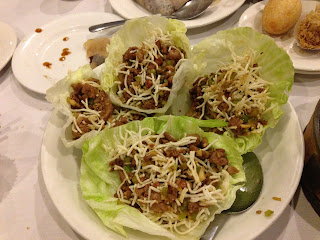 The second course involving the peking duck was a choice between lettuce wraps or some kind of shredded duck entree.  We couldn't understand our waiter so we just decided on the lettuce wraps.  All of the other tables chose the same, so we assumed we got the better of the two options.  The remainder of the duck meat is cubed and sautéed with various vegetables and spices.  It is then mixed together with small fried rice noodles for an added crunch and plated on top of lettuce cups.  The meat/veggie mixture lacked some heat, but was very savory.  The lettuce cut some of the oiliness and also provided a wonderful vessel for the mixture.  I do wish the offered a noodle or a rice dish as well, but settling for some amazing lettuce wraps is ok.

The DOs/DON'Ts:
DO:
- They are famous for their Dim Sum so definitely check this place out during breakfast time.  Dim Sum is also offered at dinner, but you order off a menu rather than picking them from a cart.
- Restaurant is "American Friendly"... a majority of the customers were tourists or Americans.  Sometimes I wonder why Asians rarely dine here... too expensive?

DON'T:
- Parking is difficult around the area.  So don't count on street parking.  Phoenix I believe validates one of the parking lots for a reduced fee.
- Don't expect the most authentic meal... but it is fine to expect a delicious meal. 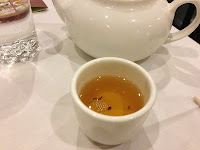 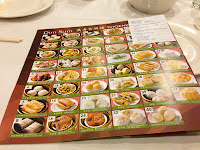 Posted by Joseph Esparaz at 9:32 AM