A Quick Word:
Southern or cajun style meals are difficult to come by in the city.  Heaven on Seven has been serving Chicagoans for years with several locations in the city... meaning they must be doing something right.  Immediately after walking into the restaurant, you are overwhelmed with thousands of hot sauce bottles from all over the world.  They line the walls of the entire restaurant.  When it comes to the food, the cajun style seasonings are very prominent, however, some of the "classic" dishes aren't that great.  They do make a great hoppin' john, but are slacking on their gumbo preparation.  And their turtle soup is just awful.  I have read several reviews about poor service at Heaven on Seven restaurants, but our experience was just the opposite.  We had a very attentive waitress that answered all of our questions.  They also have a $20 all-you-can-eat special, but I would steer away from that option.  Because some dishes were amazing and some were near awful, I decided on giving a 3.5 mile rating. 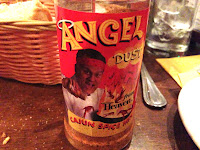 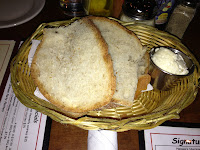 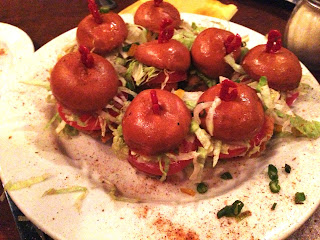 For appetizer, my brothers and I chose the mini po' boy sandwiches.  There are different quantities you can order so we chose the eight sandwich option.  The choice of proteins include catfish, chicken, oysters, shrimp, bbq brisket, and bbq pork.  We opted for two of each of the first 4 from the previous list.  Overall, the appetizer is a good size.  Each po' boy comes with a well buttered slider bun and has a generous portion of the protein of choice.  It is topped with lettuce, tomato, and a little mayo.  Out of the proteins we chose, the fried oyster was the best.  It had a great crisp and was not fishy at all.  The shrimp was my second favorite because of the cajun spices used.  It was cooked perfectly.  I wasn't a big fan of either the chicken or catfish po' boys mainly because they weren't crispy at all. They were poorly seasoned, so definitely add some hot sauce to the sandwich.  If you have never had a po' boy, this is one way to try them... it isn't as authentic, but you will get the idea. 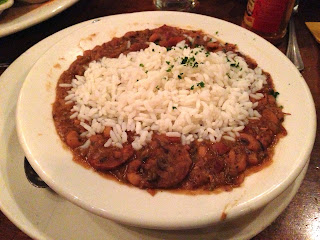 Hoppin' John may be one of my all-time favorite meals... and at Heaven on Seven, they do a pretty good job making this southern classic.  This dish is made with a mixture of blackeye peas and andouille sausage that has been cooked for hours until tender and topped with white rice.  The cajun spices are very prominent in their version with a great spiciness to the dish.  It comes out piping hot so just be careful.  I do suggest adding some of their house-made "angel dust" seasoning.  Definitely order the meal size portion because it is a significantly larger bowl and also comes with your choice of soup. 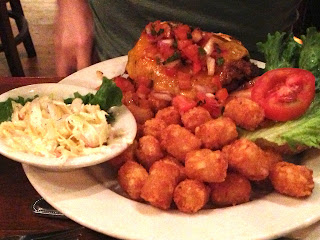 My older brother without question had the best deal of the night.  For $10.95, he ordered the Texas chili cheddar burger which is a thick burger cooked medium and topped with their chili and a homemade salsa.  It came with a side of coleslaw and my brother asked to substitute the french fries for tater tots... Great idea.  Also, it came with a soup. My brother chose the gumbo which will be described below.  The amount of food was once again borderline ridiculous.  It was enough for two people to share.  The most disappointing part of the meal was the bun.  The bread was awful... it wasn't made to withstand the sauce-like consistency of chili mixed with a salsa.  In fact, it fell apart almost immediately, making it more difficult to eat. 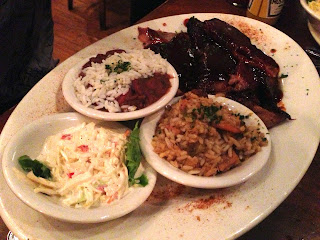 My little brother is a sucker for brisket so when he saw the BBQ brisket platter, he was sold.  This huge dish came with easily 10-12 slices of thick cut and slow smoked brisket.  It was piled high on a slice of texas toast and generously covered in their sweet BBQ sauce.  Even though it was already a huge portion, the meal came with a side of their mayonnaise based coleslaw and your choice of two sides.  Some of the sides you can choose from include red beans and rice, jambalaya, french fries, hoppin' john, tater tots, or vegetarian black beans.  My little brother wisely chose the red beans and rice and the jambalaya.  In terms of the whole meal, it was tasty.  The brisket had just enough snap in it to give it a nice chew.  I prefer the chew rather than fall apart tender... especially for brisket.  The jambalaya was well spiced with at least 3 or 4 little shrimps and andouille sausage chunks mixed in.  The red beans and rice was a little disappointing.  It was very bland and the bean consistency was too mushy.  They should have left it chunkier.  The slaw was the fresh flavor so definitely enjoy it. 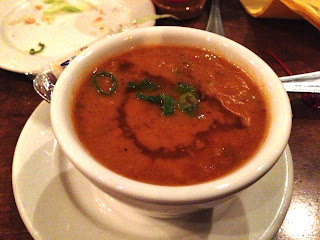 I was very excited to see turtle soup on the menu at Heaven on Seven.  This excitement led to even larger disappointment when finally tasting the soup.  First of all, the consistency was strange... some chunks of who knows what kind of meat.  And, before serving, they added a shot of sherry wine on top which gave an awful flavor... my little brother described it as bacon?  I am pretty sure they weren't going for a bacon flavor.  Worst part of all, this costs an extra $1.50 charge.  Waste of money and waste of stomach real estate. 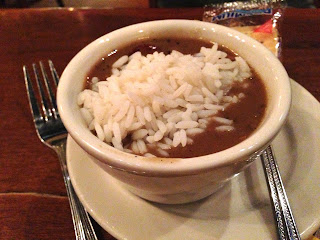 This may be some of the better gumbo found in the city... and unfortunately, it still isn't that great.  Out of all the soups, the gumbo is by far the best choice.  With plenty of andouille sausage and a generous helping of rice piled on top, the soup is actually pretty filling.  A choice of soup comes with almost any entree, so I suggest getting an entree and avoiding that ridiculous a la carte cost.  The soup was a little on the watery side for my liking and all you could taste was the sausage.  It was just OK. 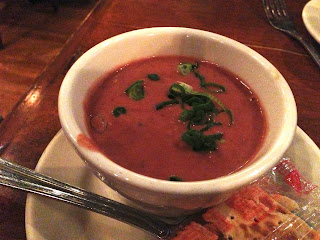 I was surprised when my little brother received his soup.  It almost reminded me of red beans and rice minus the rice.  And honestly, I think that is exactly what this "soup" was.  I described the red beans and rice above... just read that description and subtract the rice and there you go... not a good soup. And not a good choice.

The DOs/DON'Ts:
DO:
- The Michigan Ave. location is on the 2nd floor in the movie theater building.
- Add the Angel Dust spices to both the bread and butter and also on rice.  It is delicious!
- Definitely share items.  The portions are enormous and everyone will have left overs.

DON'T:
- Don't order the Turtle Soup.  They add Sherry wine before serving which is awful.  The turtle is almost non-existent.
- I wouldn't do the $20.00 family style meal.  The fried chicken refers to fried chicken tenders and the catfish is more soggy than crunchy.  There are plenty of opportunities to try all the sides when ordering their entrees at a lower price.

Posted by Joseph Esparaz at 3:40 PM