A Quick Word:
Ever since I heard about the lobster roll, I have been searching for restaurants that serve it.  Every time, however, the price is outrageous... in the $20s or higher.  Finally, Chicago was graced with Da Lobsta... a place that I like to describe as "reasonable priced lobster."  When first walking into the restaurant, you encounter a huge chalkboard sign describing the anatomy of a Maine Style Lobster Roll.  These differ from the typical lobster rolls you see on TV.  Definitely check out the picture below.  The huge variations in lobster rolls is a creative twist that I have never seen.  I personally like this approach, but each of their toppings seem to be lacking the perfection needed to be great.  The cost at first seems reasonable, but for the size of the sandwich, it turns out to be a fairly expensive meal that will not necessarily fill you up.  They do give the option of choosing shrimp or crab as a substitute for the lobster... and the price is cheaper... but who would do that at place called Da Lobsta? The restaurant is also lacking a bathroom, adequate seating, and a friendly atmosphere.  I would almost rather take out then have to deal with their restaurant layout mishaps.  For these reasons, I could only give it at best an average rating of 2.5 miles.
What We Ate: 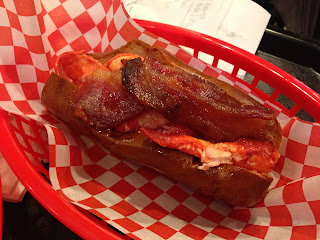 My older brother decided on getting the Surf & Turf lobster roll.  This was a great idea because it combines the traditional lobster roll with a couple strips of maple glazed bacon.  The traditional roll is made with a tarragon mayo and drizzled with a garlic butter.  It is of course served on the traditional lobster roll bun which is heavily buttered and toasted on the exterior, but remains soft on the inside.  There is plenty of of lobster meat... and it is all claw meat.  In fact, I can't remember the last time I was able to eat bite after bite of lobster and not worry about running out.  The lobster has a nice sweetness to it, probably from being claw meat rather than tail meat.  The tarragon mayo is very mild and I actually wish there was a little bit more.  The bread was probably the best part.  You could serve almost anything on that bun and it would taste rich and amazing.  The price is the initial reason I was raving about this place... but in the end, at $13.00 per roll, it is very reasonable for Chicago seafood until you factor in tax and probably a bag of chips and a drink. After all of this, you will be stuck paying over $15.00 for a meal that is definitely on the smaller side. 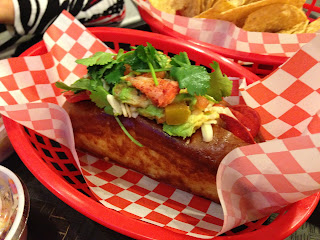 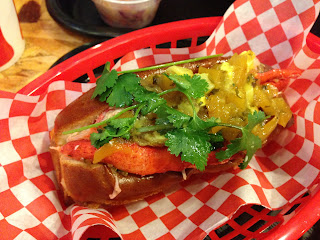 I decided on trying the Indian lobster roll.  I figured we should try all the different variations rather than sticking to just the traditional.  This roll was the traditional bun filled with plenty of claw meat and topped with cilantro mayo, a mango chutney, and a potato-paneer salad.  The cilantro mayo was nearly non-existent in my lobster roll.  The mango chutney and potato-paneer salad was a nice garnish, but added too much sweetness to the roll.  All I could taste was the sweetness from the mango which was also disappointing.  For additional information about the lobster meat and bun, check out the first roll's description. 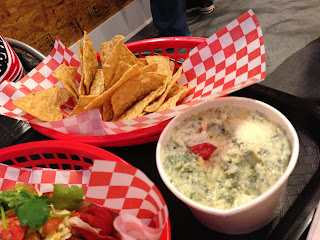 Now the lobster & crab spinach dip is definitely worth the price.  At under $7.00, it is in fact, a steal.  Served in a cardboard cup, this dip is made with plenty of spinach, cheese, and of course chunks of lobster and shredded crab meat.  It reminds me of spinach-artichoke dip.  It is very creamy and rich and when you get a chunk of crab, you definitely get that seafood flavor.  It comes with tortilla chips, but I would rather prefer using warm pita to dip.  I did have one huge complaint... the dip is NOT served hot.  I don't know if this is a theme the restaurant is trying to accomplish, but I assume not.  If Da Lobsta wants this dish to become a huge hit, I suggest heating it up to a bubbling temperature and then serving it with both tortilla chips and pita.  If this was done, I would even fork over a couple extra bucks. 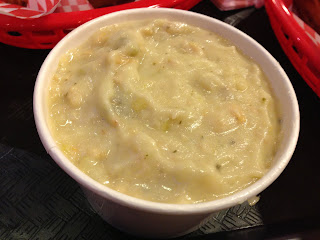 After reading many reviews about Da Lobsta's clam chowder, I was hesitant to try it.  All the reviews claimed it to be too watery and overly salted.  Unfortunately, we still ordered it, and we were quite disappointed when greeted by a bowl of extremely thick, bland chowder.  I guess the restaurant took the advice of their reviewers, but still missed.  I was reminded of a potato soup that needed a good amount of seasoning still.  There aren't huge chunks of clams that I wished for.  Also, it was served at a warm temperature, not hot.  I do NOT recommend this at all.

The DOs/DON'Ts:
DO:
- After ordering, you will realize that it takes very short time for food to arrive.  Do try and grab a seat ahead of ordering... especially if the restaurant is packed.
- Do try one of their lobster rolls... Why wouldn't you?... they named their restaurant after it.

DON'T:
- Don't drive.  Parking is next to impossible on Cedar St. and anywhere around this street.
- Don't try their soups.  Unless they change their recipe again, it is bland, thick and just unpleasant.
- Don't expect to find a restroom in the restaurant.  This tiny cramped space is lacking a restroom. 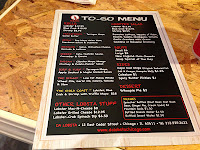 Posted by Joseph Esparaz at 7:55 AM