A Quick Word:
A bunch of my friends and I decided to head out to Chicago Brauhaus in Lincoln Square for a few beers before heading out to the drink in the city.  This German themed restaurant is one of the few places in the city to actually get a boot of beer.  These enormous glass boots hold 2 liters of beer and cost $26, which is actually a good deal in the city.  Besides beer, they offer authentic German cuisine from schnitzel to homemade pretzels and much more.  Unfortunately, I was unable to try any of the dishes containing meat because we came on a Friday during Lent.  The atmosphere was really fun with live music and a dance floor.  It is very loud so just be aware... in case you were thinking more of an intimate dinner.  I decided to give the Brauhaus a 3.5 mile rating for now.  I truly believe it will be raised to minimum 4 mile rating, but I want to try their entrees before making that decision.  Check back for an update. 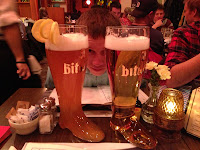 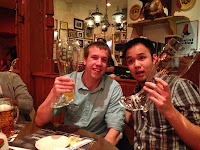 My friend and I decided on ordering the boot of beer, while others ordered the 1 liter glass.  Honestly, we didn't know how much beer came in a boot, but we did know they were huge and required a credit card as a security deposit... just in case you break it.  After ordering our boots with our choice of beer, we were surprised with a 2 liter boot of beer.  We received funny stares from other customers... especially the parents that were enjoying their pints.  The boots hold quite a bit of beer and definitely do the job.  I highly suggest pairing the beer with one of the homemade pretzels.  Check out the pretzels below. 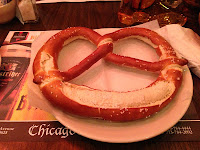 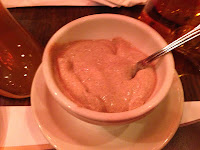 All I can say is WOW.  The homemade pretzel at Chicago Brauhaus is easily my favorite pretzel in Chicago and even competes with the Amish Pretzels from a restaurant near my hometown.  These german pretzels are freshly baked to order and simply topped with those larger pieces of pretzel salt.  There is a nice crust to the upper half and a very soft interior.  The bottom (whiter) piece was the softest and my favorite... it appears to be less cooked than the upper half, which was an interesting aspect (basically, it is much thicker at the bottom, letting the cooking process not be has long as the top).  It comes with a side of butter and a side of house-made mustard.  That mustard is unreal.  It has a horseradish-taste to it which just grabs at the palate and gives you that nasally spice.  I used a lot of mustard on my pretzel and highly recommend this dish... especially with one of their cold beers.  It is large enough to substitute as a smaller meal.


A Couple of their Bratwurst Sausage Entrees 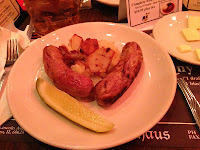 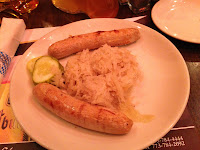 Unfortunately, I was unable to try their bratwurst entrees because we decided on coming to the Brauhaus on a Friday during Lent.  A couple of my friends ordered some meat dishes including the Sheboygan Bratwurst and I believe the Deutsche Bratwurst.  I am unsure how they differ in terms of flavor, but I do know the dish comes with a choice of one side.  And at only $9.00, I consider this a steal.  They seemed to enjoy it... especially the heaping pile of sauerkraut.  I will definitely be back to give them a try and will update my review then.

The DOs/DON'Ts:
DO:
- Beer Sizes:  Boot = 2 Liters; Other sizes include 1 Liter and a pint
- Reservations are not taken online, but I learned when we arrived that you can call for a reservation. I highly suggest making reservation on weekends

DON'T:
- Parking is next to impossible in the area... Don't drive.  And definitely don't drive if you plan on drinking a boot! 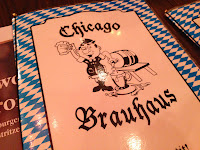 I personally was unable to try their meat dishes (Lent)...
I decided on a 3.5 mile rating until I am able to try other entrees.

Posted by Joseph Esparaz at 2:16 PM