A Quick Word:
After hearing about Nick's Pit Stop in Bucktown, I was excited to try their chicken and compare it to the other "chicken-only" establishment on my blog... Pollo Express.  Nick's is essentially the American version of Pollo Express, offering charbroiled chicken with typical comfort food sides.  Upon entering, you will see their huge grill with dozens of half chickens being grilled to perfection.  A cafeteria style setup is utilized with the "scoop and plop" technique in action for your choice of sides.  After tasting the food, I can tell Nick's is proud of the chicken recipe, but not very fond of sides dishes.  It appears they would rather serve canned green beans than make their own recipe.  Because of the subpar side items, I have decided to give them just an average rating of 3 miles.  I guess I will stick to Pollo Express, for now. 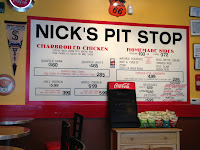 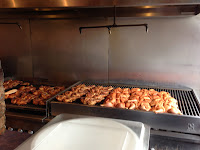 Their menu on one wall and the huge grill filling up the rest of the restaurant! 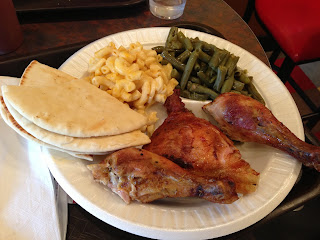 After a long morning of studying at the nearby Map Room, my friend and I walked to Nick's Pit Stop for a quick lunch.  Nick's has essentially one item on their menu... Chicken!  The Charbroiled Chicken is either served with sides or in a pita.  I opted for the day's special which was a 3 piece dark meat platter that came with two sides of my choice.  From the long list that includes mac & cheese, fries, baked beans, green beans, mashed potatoes, corn, and much more, I chose mac & cheese and green beans.  The meal is huge and at under $8.00, a great deal.  It also came with a couple slices of quartered pita bread.  Overall, the chicken is perfectly cooked and well seasoned.  It falls off the bone and doesn't need any sauce at all.  Of course, I tried their BBQ sauce and hot sauce which were both on the subpar side when concerning taste.  The BBQ sauce reminded me of Arby's sauce, which was good at first, but after a while was way too sweet for the chicken.  The skin was a little on the chewy, fatty side but still had good flavor.  The sides were disappointing.  The green beans were served directly out of a can (despite me liking canned green beans, I was expecting more), and the mac & cheese reminded me of the cafeteria style dish you get in grade school.  You can really tell they focus mainly on their chicken and kind of half-ass their sides.  Still a great deal for the price and probably a place I will frequently visit after studying.  Definitely request for two thighs and a drumstick if you are a little hungrier than I was.

The DOs/DON'Ts:
DO:
- Definitely read the small black board underneath their menu.  They have rotating special combos which make eating here even cheaper!
- Ask for both BBQ sauce and Hot sauce.  For descriptions... read above.

DON'T:
- Plenty of parking on side streets all throughout Bucktown.  So don't pay for parking on Damen.
- I wouldn't order the green beans, unless you like green beans straight from a can like I do.

Posted by Joseph Esparaz at 7:10 PM