A Quick Word:
Having heard great reviews about the Austrian Bakery in Lincoln Park, my buddy and I decided to check it out for a quick dinner.  This cafe style restaurant reminds me of being in Europe.  They have all their fresh baked breads lining the walls and their well-decorated pastries and cakes staring back at you through the glass refrigerators.  It is a small restaurant with maybe 25 chairs and in my experience, just a couple of young ladies working behind the counter.  Beyond the bakery aspect, the restaurant serves amazing traditional dishes from schnitzel to spaetzle and everything in between.  The food is excellent (I enjoyed it significantly more than the pastries).  The atmosphere is very welcoming and the staff is fairly attentive.  I have heard some trouble with waiting after ordering... which we did experience a little, but it wasn't too long.  I rated it 4 miles mainly because the food was incredible, but thecost was a little high for my liking and the pastries were a disappointment.  So, if you are on Clark St., make sure to look out for this place and definitely stop in to grab a bite! 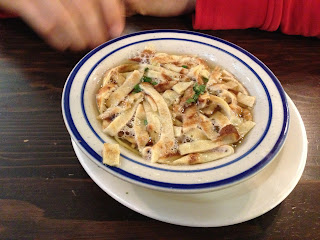 My friend went ahead and added this traditional Austrian soup to his meal.  The frittaten soup is a vegetable based broth topped with sliced crepes and chopped green onion.  The sliced crepes reminded me of a very light noodle except the consistency melted in your mouth which was interesting.  It was served piping hot.  It didn't have too much unique flavor, but overall it was just a nice light soup to start the meal. 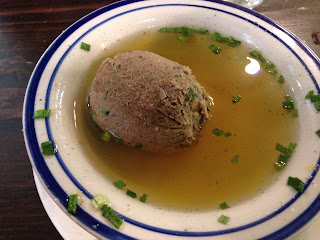 Wow!  The liver dumpling soup was unreal.  Such a simple vegetable and beef broth base with a nice sized dumpling made from liverwurst.  At first I was skeptical to order the soup, but I am so glad I did.  This was easily the best part of the meal.  Just break of the liverwurst dumpling into a bunch of smaller, more manageable pieces and let it soak for a few seconds.  The soup comes out piping hot and has some great flavors once the dumpling is broken up.  I highly recommend this soup and everyone should order it! 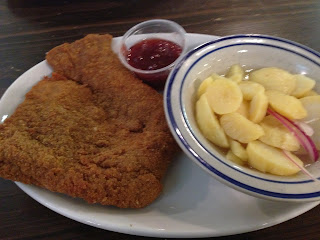 So I chose the weiner schnitzel dinner for two reasons... 1. who can pass up veal and 2. it came with a small soup (and I heard great reviews about their soup).  Anyway, the veal chop was pounded thin and lightly breaded.  It was panfried and served with a side of lingonberry jam and your choice of either rosemary roasted potatoes or German potato salad (which I chose the latter).  The veal chop was tender and the breading was perfect.  It was extremely crispy, but not as seasoned as I was hoping.  The lingonberry jam was a nice sauce for the schnitzel, giving it a sweet element.  My german potato salad side was an interesting dish... it is a vinegar based potato salad served cold.  The acidity from both the red onions and the vinegar cut the fried flavors very well.  I definitely recommend the german potato salad. 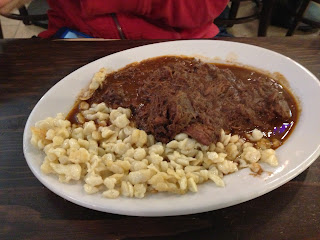 The goulash was the other traditional dish that caught my eye.  My buddy ordered it and I was able to try a few bites.  The beef goulash is a beef stew that has been cooked for hours until tender.  It was heavily spiced and served with a side of spaetzle. This was the first time I ever tried spaetzle, which is a weirdly shaped egg noodle or the starch of many typical Austrian dishes.  It appears the restaurant boils the egg noodles and cooks it with a little butter, but they keep it simple because you are supposed to eat it with the beef goulash.  I really enjoyed this dish and would recommend it also. 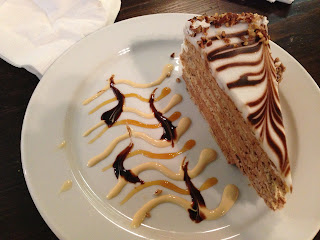 When I am not too familiar with a country's cuisine, I try to either taste the traditional dish or the most interesting named dish.  This time, I chose this case because of the name.  I found out that it was made up of a hazelnut flavored crisp layered high with an alternating butter cream frosting.  The overall presentation was done well, but the dessert fell short in many ways.  First of all, it is not a soft cake.  The layers are too tough to cut; you kind of have to chip away at it.  The hazelnut flavor is prominent and overwhelming.  I wouldn't order this dessert again and for nearly $5, it was too pricey for me. 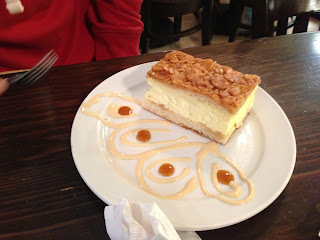 My buddy chose the dessert that initially caught my eye.  This is a traditional Austrian pastry made up of sweet dough filled with a whipped cream and topped with a slivered almond and caramel-like topping.  Overall, this was significantly better than the Esterhazy dessert.  The cream was light and the pastry was actually soft and dessert like.  The topping wasn't as sweet as I was hoping.  Unfortunately, as I was eating the dish, I was sometimes confused if it was a dessert or not.  Once again it was too pricey for a pastry.

The DOs/DON'Ts:
DO:
- When first arriving, it is confusing what to do... so if you plan on dining in, just take a seat and one of the girls will bring over a full menu with entrees not listed on their chalkboard.  If you are planning on taking out, then just place your order at the counter and patiently wait.
- Definitely get the soup!  I thought the soup was the best part of the meal, maybe because it was cold outside but also because of its amazing taste.

DON'T:
- I honestly wouldn't splurge and get one of their cakes.  They weren't anything too special and after eating such a huge meal... it was just too much.
- The cakes were not worth the price.
- Don't be in a hurry when you are dining in.  The service is a little slow (which I heard before trying this place, so I was ready).