A Quick Word:
After the fun Santa Hustle 5k, my friends and I were looking for a breakfast joint to grab a quick bite to eat.  Located in the middle of Little Italy (near UIC), we arrived at Stax.  This restaurant pride itself in offering a variety of entrees that focus on wholesome ingredients.  From the half dozen pancakes to the half dozen waffles to all the different omelets and skillets, Stax's variety will not disappoint.  Overall, the food has great flavor, but there is always some part of the dish that just doesn't work.  Whether it is over seasoning or being heavy handed on random ingredients, the dishes can't be labeled the best.  The atmosphere of the restaurant is cozy and very welcoming.  They staff is somewhat attentive and the location is great, especially for college students.  Prices are what I consider average for brunch but still a little high for being around college students (but i guess we are in Chicago).  I recently returned to stax and had an excellent experience.  The food is still great and for that reason a 4 mile rating is definitely deserved. 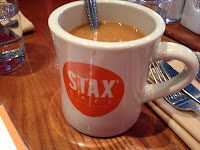 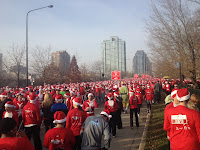 Our visit to Stax after the Santa Hustle 5K 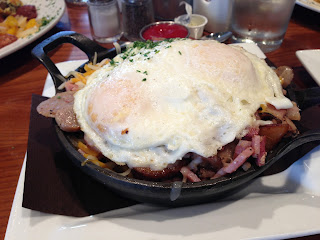 This time around, I decided on one of their huge skillets.  I chose the lumberjack option which was made with a base layer of their house potatoes and the topped with ham, sausage, bacon, chicken sausage, and chorizo.  Then a layer of melted cheddar cheese and two eggs over easy complete the meal.  No joke, this dish weighs at least 3lbs.  It is a ridiculous portion that is just packed with flavor.  My favorite was the chicken sausage, especially with a little ketchup and hot sauce.  What is more crazy is the dish also comes with a side of either toast, mini pancakes, or mini waffles.  Unfortunately, I forgot to picture the mini waffles.  At $14 though, it is on the steeper side for breakfast. 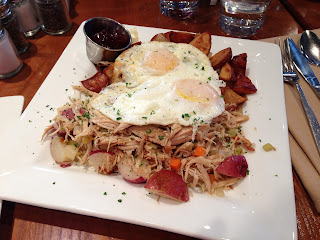 Coming to restaurants the week or so after Thanksgiving has its perks.  For one, at Stax, they offered this Turkey or what I liked to call the "Thanksgiving Hash."  It was a huge plate of roasted red potatoes topped with chopped carrots, chopped celery, onions, and of course pulled thanksgiving-style turkey.  Two eggs (which I chose to have over-easy) were gently laid on top and a huge side of their home fries accompanied the dish.  It is served with a side of cranberry sauce to complete the thanksgiving theme and mini pancakes just in case you weren't full already.  The hash was incredible... tons of meat and with the yolks popped over it all, it became an extremely rich dish.  I was disappointed in the amount of carrots an celery though; they were real heavy on these veggies which don't really remind me of "breakfast."  The home fries were nice crispy potatoes mixed in with bell peppers and thick cut onions. The onions were a little on the heavy side again.  I suggest spreading the cranberry sauce over the turkey hash and just remember your Thanksgiving meal. 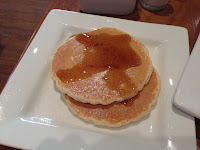 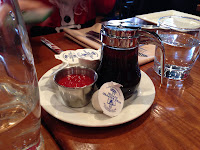 This was the side I chose for my Turkey Hash.  The pancakes were light and fluffy.  They weren't anything special, but it was nice to have something sweet to go along with the rich and savory hash.  The maple syrup isn't served warm, which is a little disappointing.  But overall, it was still good. 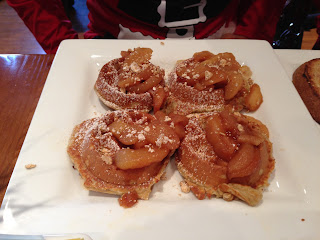 Ordering mini waffles at Stax is a great way to get a smaller portion without sacrificing taste.  For $1 more, you can upgrade the mini plain waffle option to one of their specialty waffles.  The oatmeal waffle is topped with apples, cinnamon, and granola.  The consistency of the waffle was excellent.  I wasn't a huge fan of the apples (which seemed to be exactly like apple pie filling).  The granola on top did give it a nice crunch. 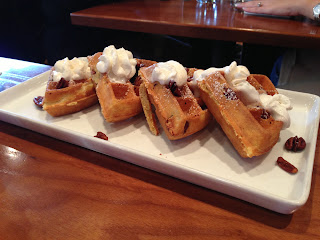 This is probably one of my favorite waffles they serve at Stax.  These butter pecan waffles are topped with whipped cream and candied pecans.  I was surprised to find the pecans baked right into the waffle, giving a more nutty flavor throughout.  Two of my friends weren't starving, so they shared this entree.  I thought it was a great idea, but it needed something salty to accompany it.  Maybe a side of house potatoes or a few strips of bacon? 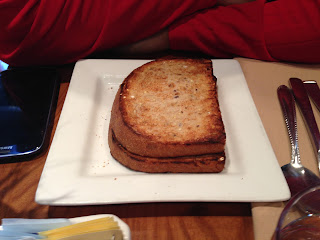 My roommate ordered a side of toast because everyone loves toast for breakfast.  The multigrain toast at Stax though is extremely dense.  After it has been toasted, it feels like a heavy piece of bread that is actually tougher to bite into than you would think.  They use packaged butter and jam which is typical for most brunch places... I do wish they made their own.

The DOs/DON'Ts:
DO:
- Definitely try this place if there is a long waiting time for the neighboring and famous Sweet Maple Cafe.  You won't have to wait at Stax and the food is pretty good.
- Ordering the mini waffles is a great idea.  For $1 more, you can upgrade them to any of the waffles on the list and it is still plenty of food.
- Just for clarification... once you are done with your meal, you pay at the register (near the front door).

DON'T:
- I have had the lunch here one time...  The falafel sliders are OK but I wouldn't choose lunch when they are known for their breakfast.