A Quick Word:
The concept of Fat Sandwich started off in a bunch of college campuses, including U of I in Champaign.  When I heard it came to Lincoln Park area of Chicago, I was excited to try one of their fully-loaded sandwich.  My roommate and I went for lunch and it was awful.  The sandwiches reminded me of a thrown-together sandwich I could make from taquito and hot dog rollers of 7-11 ingredients.  Frozen chicken fingers, frozen mozzarella sticks, and everything else frozen is layered into a french type roll and covered with french fries and your choice of sauces.  They menu items have unique Chicago-themed names, but that may be the only good part about the restaurant.  It would probably be a great hangover style meal, but any other time, I would never get this sandwich again.  Thankfully I had a groupon, so it was significantly cheaper than the outrageous price of $8.50 for essentially a frozen sandwich.  I went ahead and gave a 1 mile rating because the cook/cashier was kind enough to substitute additional ingredients to make a more vegetarian friendly sandwich. 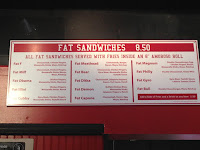 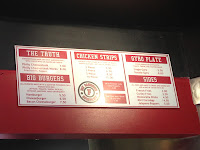 Here is the actual menu at the Chicago location.  It is significantly different from the one
in Champaign so make sure to take a look.  They also offer burgers, gyros,
and some other favorite late night items. 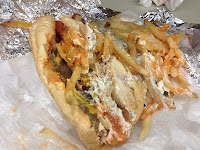 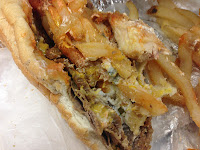 I ended up choosing the Fat Bear, named after obviously the Chicago Bears football team.  I chose it because it was loaded with all the meats and fried sides--cheesesteak, chicken fingers, gyro meat, mozzarella sticks, french fries, and tzatziki sauce.  I also asked to add some hot sauce to give it a little kick.  The sandwich is huge... it is enough food to feed a couple people unless you are absolutely starving.  The best part was probably the cheesesteak, but that isn't saying much from all the undercooked fried items in my sandwich.  The mozzarella sticks weren't stringy, the chicken fingers had cold spots, and the fries were both undercooked and oily.  I ended up taking all the fries off the sandwich and just eating everything else.  Like i said glorified 7-11 sandwich? 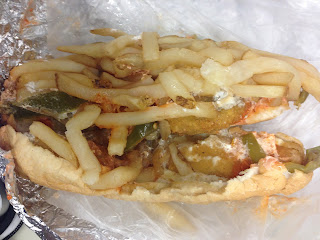 My roommate looked at the items, and when no vegetarian sandwich was available, decided to just remove the meat from one of their other creations.  The Fat demon was his choice, and he had Buffalo chicken bites (substituted for grilled onions and green peppers), mozzarella sticks, jalapeño poppers, and ranch (substituted with tzatziki sauce and hot sauce).  The substitution method the cook allowed was one of the better aspects of the restaurant.  The overall sandwich however was a lot of fried flavors.  The jalapeño poppers were filled with cheddar cheese and sort of creamy/curdy as opposed to liquid cheese in the middle.  Also, it didn't add much spiciness to the sandwich. 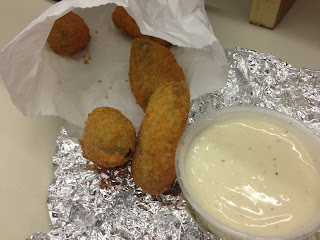 This was the only "unique" side dish that I wasn't able to try in my sandwich.  The jalapeño poppers are a chunk of jalapeño and a cube of cheddar cheese that is battered and deep fried.  The jalapeño was not spicy and the cheese came out to be curdy.  After eating a couple dipped in ranch, you feel sort of sick from the canned cheese like consistency and the oil each one holds on to.  I do not recommend.

The DOs/DON'Ts:
DO:
- If you end up choosing to eat here, try to make it a late night spot.  For a normal meal, the food will just make you sick and feel awful.

DON'T:
- Don't come right when they open... I arrived around 11:10AM and the store was still not open.  The guy arrived around 11:20AM.
- Not a good vegetarian restaurant.  They will accommodate but try some of the other late night joints before coming here.
- Don't eat the fries.  They were the worst part of the meal.  Either undercooked, soggy, or oily.  Probably a combination of them all and even that much more awful.