For the third part of this four part series,
I decided to group the restaurants based on SWEET options.
This includes CANDY STORES and BBQ.
I was lucky enough to stumble across several praline options and also attend
the BBQ and Blues fest, which featured BBQ from all over Louisiana. 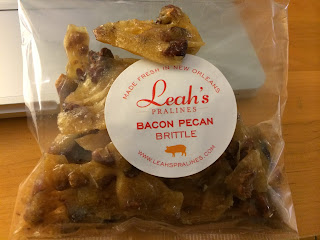 I never realized NOLA was known for its pralines and candies as much as their cajun cuisine.  After bypassing several of the larger establishments, I found Leah's Pralines.  This small, family-run shop is located off the main streets but is home to wonderful candies.  Their pralines were just OK in my mind, but their Bacon Pecan Brittle was to die for.  Large chunks of candied bacon and halved pecans are encountered on each bite of this brittle.  You may wonder why I could only give it at 3.5 mile rating... well when you shell out more than $10 for a small bag of brittle, you make think twice about coming back.  Yes, I do crave it, but I can suppress that craving to save some cash. 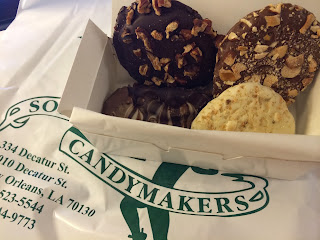 As previously mentioned above, dozens of candy stores line the streets of NOLA.  When it came to toffees, I only came to Southern Candymakers.  Here, they make several versions of the classic english toffee candies.  Some topped with milk chocolate and walnuts, while others had white chocolate and pistachios.  A dark chocolate and pecan option was also available.  These are extremely sweet and the toffee has the perfect crunch to allow it to stuck to your teeth, but melt away.  Super buttery and rich, make sure you only eat half at a time.  I tried toffee elsewhere, but it didn't match up.  Unfortunately, at two to three bucks a piece, the prices add up fast. 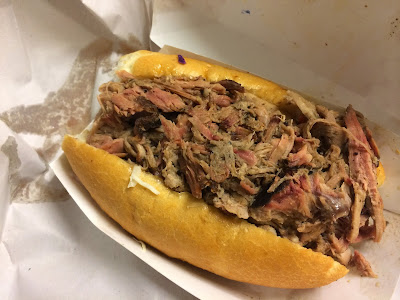 At the BBQ and Blues fest, I was able to sample several different restaurants and their championship-style BBQ.  After pacing back and forth several times, I finally chose Walker's Southern Style BBQ as part of my meal.  Here, I ordered their FAMOUS Cochon de Lait Po' Boy.  This coveted sandwich used to only be available at the blues fest; however, after by popular demand, a store front was finally opened.  This po' boy starts with the typical hoagie roll then a thin layer of slaw before literally two handfuls of their pulled smoke pork.  It literally weighs more than a pound.  The meat is plentiful and has some of the best smoke flavor I have ever tasted.  The slaw is just enough to cut that smoke and give it a vinegary crunch.  I wish I had time to get another one, but with so many options I decided to diversify.  I crave this po' boy more than any po' boy in NOLA and for that reason I decided a 4.5 mile rating was easily worth it.  This sandwich almost tipped the scales to perfection. 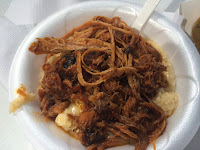 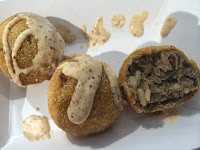 The other stand at the Blues and BBQ fest I decided to try was Squeal BBQ.  I saw the actual restaurant near Jacquimo's in Uptown, but wasn't able to try it due to lack of a car.  Luckily for me, they had a stand.  They offered two dishes... the first was pulled pork polenta and the second was the NOLA classic, boudin balls.  When it came to the polenta, I loved the creaminess and the amount.  They were very generous with both meat and polenta.  Unfortunately, I didn't really see how the two ingredients mixed... in fact, I found so much disconnect, I decided to eat them separately.  The polenta had no smokiness or BBQ aspect at all.  And the pulled pork just sat on top of the polenta.  Eating them together didn't even help.  Now the boudin balls, these were the best I had while visiting NOLA.  I know that isn't saying much since I only found two places that offered them, but still I was glad to have them.  Boudin balls are their rice and "left over" pork sausages rolled into a ball before being deep fried and served with some kind of mustard dip.  The sausage itself is a little strong for many, but when it is deep fried, it loses that game flavor. 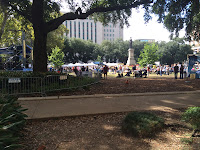 The blues fest was a beautifully orchestrated in one of the squares near the central business district.  Despite the rain, there was still a huge turnout.  Tons of BBQ smells filled the air making me want to come back for more.