A Quick Word:
A lot of my friends kept asking me my thoughts on Mercadito.  And, I was always against having EXPENSIVE Mexican food, especially with the Pilsen neighborhood so close.  Anyway, one of my friends and I headed to Mercadito after a night of skating.  On a random Monday night, the restaurant was crowded.  In terms of the atmosphere, think modern design, yet packed in tight.  Our tables were essentially on top one another, making it easy to eavesdrop if that is your forte.  And, with such a busy restaurant, the service didn't keep up to par.  When it came to the food, I was impressed with the guacamole and all the tacos we ordered.  In fact, these were extremely authentic and at the same time, unique enough to make me want more.  They offer specials, which for us, included an Asian-inspired duck taco.  But once again, price was the deciding factor keeping it from a higher rating.  At $16 for an order of 4 tacos and $13 for the guacamole duo, you can just imagine how fast a final bill can add up.  And for that reason, the 4-mile rating is fair.  Great food, but River North prices.  If they allowed a mix and match for tacos, I would feel more comfortable paying those prices. 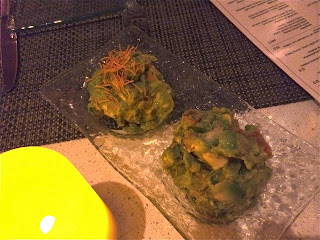 I had heard great reviews about Mercadito's guacamole,  mainly because of the many different choices. Ordering just one is a rip off, so we stuck with the guacamole duo for just a few bucks more.  Our first guac was the tocino.  Imagine bacon, roasted sweet potato, tomatillo pico, serrano peppers, and topped with fried sweet potatoes... can't go wrong!  The other guac was called pera.  This one had pears, chipotle meco epazote, and pico all mixed in.  The tocino guac had a nice bacon flavor to it, which made it extremely savory.  The sweet potatoes didn't add much except for a crunch factor on top.  The pera guac had a nice sweetness to it, but not enough spice.  They were both delicious, but a little something extra on both is needed to elevate it to the next level.  Highly recommended, but not even close to extraordinary. 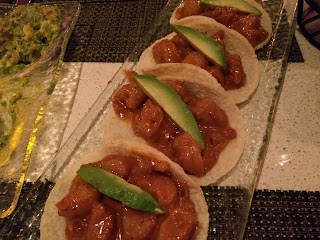 For our first set of tacos, we stuck with camarones aka shrimp.  Each order comes with 4 tacos of the same type, NO MIXING.  These tacos had shrimp sauteed in a roasted garlic and chipotle mojo sauce before being topped with a slice of avocado.  They were served on a lightly warmed corn tortilla.  Each taco was packed with shrimp... in fact, the shrimp would fall out on each bite with how overloaded each one was.   The avocado added a nice rich creaminess to the tacos, but not much flavor.  Definitely add some of the pear guac to these tacos to help cut the heat.  That chipotle sauce is spicier than you think, but still be aware what you are ordering. 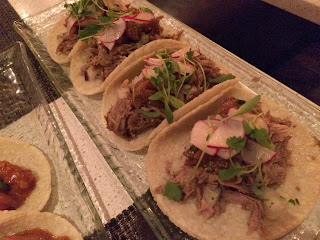 After going through all of the choices, my friend and I had a hard time deciding on our final taco order. But once she heard duck, the decision was made.  This day's special was a roasted pulled duck taco topped with sliced radish, an onion chutney, and hoisin sauce.  Once again, the tacos were served on corn tortillas.  This taco reminded me of a pecking duck or even a bao.  The only difference was the taco shell instead of the white asian bun.  The chutney had a wonderful sweetness, but didn't distract from the taco taste.  The meat was extremely tender.  Without question the best dish of the night.  Hopefully any other day's special is as good as this one.

The DOs/DON'Ts:
DO:
- Make reservations.  This place gets extremely packed at all times of the week and night.  We went on a random Monday night... somehow the entire restaurant was packed at 8PM.
- Definitely share.  Each order comes with 4 smaller tacos, making it a perfect dish to share.

DON'T:
- Service can be kind of slow and tables really jam packed together.  Don't expect a fast or quiet dinner at this restaurant.

Posted by Joseph Esparaz at 1:37 PM