A Quick Word:
While walking across campus to grab a quick bite to eat at the student center, I stumbled across this blue food truck parked just a few feet away.  I decided to check out their menu and noticed it was BBQ.  I was pretty excited until I noticed the prices.  This food truck features BBQ sliders (meaning very small sandwiches... small enough that the owner told me I would need at least two and a side to be somewhat full).  The food itself was tasty for sure, but not worth the cost.  The people on board were all friendly and the service was real quick.  If I want good BBQ, I know I shouldn't go to a new food truck in Chicago.  And, for that reason, an average rating of 3-miles was awarded. 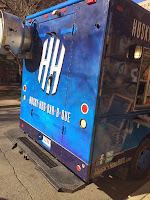 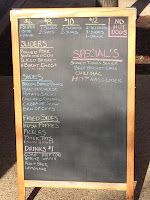 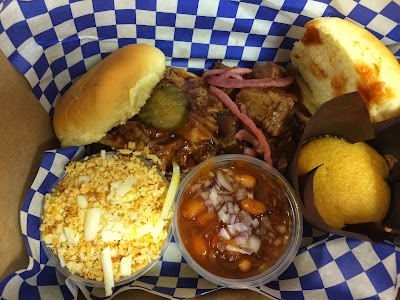 For my meal, I stuck with the $10 box... pretty expensive for lunch.  Anyway, it came with my choice of two sliders (I chose the pulled pork slider and the burnt ends slider), a side of Mac n' Cheese, their bacon baked beans, and the guys were generous enough to throw in some corn bread.  The sandwiches were served on sweet slider buns and topped with something unique.  For the pulled pork, it was a pickle, and for the burnt ends, they used pickled red onions.  Both sandwiches were pretty tasty, just extremely small for your money.  The mac n' cheese didn't really have a specific cheese flavor, but it did have one of the best crusts I have had.  It was extremely crispy (It was obviously sprinkled on before serving).  And those beans... he told me it was the 2nd most popular, and I don't see how it could be.  The red onions over power everything... Add some of the meat into the beans and extra BBQ sauce and it tastes a little better.

The DOs/DON'Ts:
DO:
- Combos are definitely the best deal... but that isn't saying much.  If you are really craving BBQ and can't find other places, then this is an OK place to settle.
- Ask them to not pre-sauce the food.  This way you can add whichever BBQ you prefer.

Posted by Joseph Esparaz at 9:59 AM