A Quick Word:
On a random Monday night and after a stressful day of work, my friend and I decided to grab a bite to eat.  We encountered a couple of closed restaurants before she suggested Roy's.  Located near the Magnificent Mile, Roy's is what I consider a "semi-chain" restaurant.  There are several locations located throughout the country, but each one has an executive chef that creates his or her own menu, catering to the local cravings.  They feature Hawaiian fusion cuisine... so more of an Asian spin on several dishes.  Roy's is my family's go-to restaurant on any given night.  They are always busy, but tend to always have a few tables open for the people that just stroll in.  Roy's is also home to MY FAVORITE DESSERT IN THE CITY.  Their chocolate soufflé is to die for.  The atmosphere is very classy, but that doesn't mean you need to wear a shirt and tie.  People dress in shorts and t-shirts during the summer and are still welcome.  For their classy, yet laid back feel, and their excellent food with a few flaws, I decided a 4-mile rating was perfect for Roy's.  Come try their soufflé! 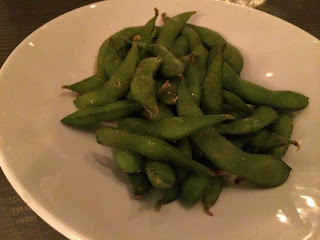 After ordering several dishes, we were given a free appetizer of edamame.  These soy bean pods are lightly seasoned with salt and other spices following their cooking process.  If you haven't had them before, only eat the inside soy bean... leave the pod.  Can't complain for a free dish. 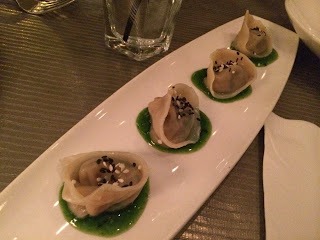 Both of us are huge fans of pork belly.  So for our first appetizer, we chose the pork belly dim sum.  These dumplings remind me of tortellini but are made with wonton wrapper instead of pasta.  Inside is a mixture of mashed pork  belly and veggies.  They rest in a puddle of mint-cilantro oil and are topped with sesame seeds.  These were delicious.  The pork belly filling was extremely rich and very smooth.  It left that strong pork belly flavor on the tip of your tongue, making you want to come back for more.  The portion size is on the smaller side, but the richness definitely makes up for it.  I would recommend this appetizer to anyone. 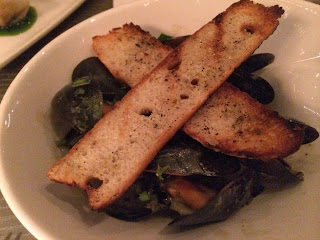 After deciding on the pork belly appetizer, we wanted to get some sort of seafood appetizer as well.  It was a toss up between the mussels and the lobster potstickers, but I had the lobster potstickers previously and wasn't impressed.  So we chose the mussels which were cooked in a coconut curry and white wine sauce and served with a couple pieces of a toasted baguette.  The dish was mediocre.  I wasn't too impressed with the mussels.  They were on the smaller side.  The sauce was delicious though, having a nice spiciness to them.  But with only two slices of the baguette, it was difficult to soak up that sauce.  Everything was a little on the salty side, so I couldn't say much more than average comments for this appetizer. 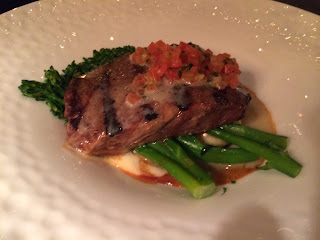 Once again, it was a no-brainer to order the beef short rib entree.  At Roy's, the short ribs are slow cooked until tender.  They are plated on top of yukon gold mashed potatoes, lightly steamed broccolini, and a buttery tomato topping.  Honestly, I have had this dish several times, and every time, it gets better.  I am never prepared for how tender the meat is and it continues to blow me away.  The broccolini is seasoned nicely and the potatoes are rich and creamy.  I would lick the bowl if I ordered this meal to go.  Highly recommended dish! 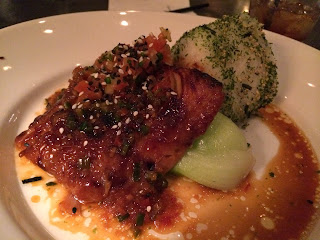 We decided to also share one of Roy's speciality fish dishes.  After much thought and several eliminations, we ended up with the butterfish.  Another great decision.  The fish is pan seared before being finished in the oven.  It is topped with sautéed tomatoes and sesame seeds.  Along side the fish, the chef plates steamed bok choy and a log of sushi rice dusted with sesame seeds and seaweed.  The fish was a generous filet cooked with traditional Hawaiian sauces... it has that sweet teriyaki-like flavor.  Eat it together with the sticky rice and it reminds you of a sweet sushi roll.  The bok choy was awful.  No flavor whatsoever and was sort of soggy.  This dish doesn't come close to the short ribs, but still pretty filling and packed with different, sweeter flavors. 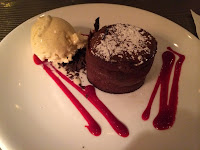 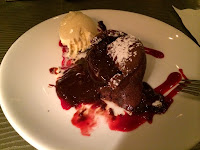 If you choose any other dessert on the menu, you definitely messed up.  Roy's chocolate soufflé is MY FAVORITE DESSERT IN THE CITY, and possibly the best dessert I have ever eaten.  This chocolate soufflé is filled with a molten chocolate center.  Alongside the soufflé is a vanilla bean ice cream and a raspberry syrup.  This dessert takes 30 minutes to make, so place your order as soon as your entree arrives.  The waiter or waitress is usually pretty good at reminding you.  When it arrives at your table, it doesn't look like much.  But, bust into that soufflé and you will encounter a liquid center of piping HOT chocolate.  Now make sure every spoonful has a little raspberry, a little soufflé, a little liquid chocolate, and a little ice cream.  I promise you, you will not be disappointed.  Definitely share this dessert with one other person because of how sugary the entire dessert is. 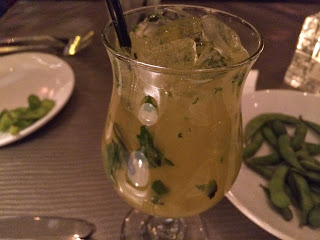 Even though it was a Monday night, we decided to each have a drink.  She ordered a mango mojito which contained Bacardi Limon, mangoes, mint, and lime.  The drink was tasty.  Reminded me of mango juice from a can.  Definitely on the sweeter list of cocktails.

The DOs/DON'Ts:
DO:
- On Monday nights, Roy's offers a 2-course create-your-own prix fix for $29.95.  You get to choose an appetizer from the stable menu and one of their entrees (not including the butterfish trio or lobster).
- A 3-course prix fix is available for $35 and has several seasonal items, not included on their traditional menu.

DON'T:
- Don't miss out on their Melting Hot Chocolate Souffle.  It takes 30 minutes to prepare so order it when entrees arrive at the table.  If you miss this dessert, you are making a huge mistake.

DISCLAIMER:
I WOULD WALK 5 MILES FOR THE DESSERT!!!

Posted by Joseph Esparaz at 4:29 PM