A Quick Word:
When the weekend rolls around and you are looking for a place to start drinking and have a great meal, definitely think of Revolution Brewing Co.  This brewery has a beer for just about everyone and has great meals that pair well with their home brews.  Not only do they have an extensive menu including burgers, sandwiches, and pizzas... they also take the time to create daily specials with whatever seasonal ingredients are available.  I love the laid back atmosphere and the cheap beer prices.  Unfortunately, the location is not even close to the downtown proper.  The restaurant is located in Logan Square meaning a double digit cab ride cost or a long, annoying trip on several public transportation vehicles.  Both the location and the fact that the meals weren't perfect and memorable in every way led me to a more fairly rated 4.5 miles.  I still highly recommend the restaurant and brewery and I know I will be back soon. 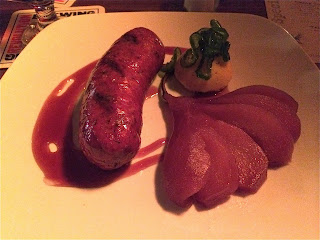 For some reason, I wasn't too hungry when we arrived at Revolution.  I scanned the menu and one of their day's specials caught my eye.  The special came with a country-style venison sausage served with red wine poached pears, cinnamon corn bread, candied jalapeños, and a red wine syrup.  It sounds like a lot, but everything was portioned very well.  The sausage itself had plenty of strong seasonings that made the sausage unique but still keep that venison-gamey taste.  I absolutely loved the poached pears and the candied jalapeños.  Sweet and spicy paired very well with the venison.  Unfortunately, the cinnamon corn bread was inedible.  It was drier that a handful of sand and tasted like a bottle of goldschlager was poured on it.  Thankfully I had a beer to wash it down. 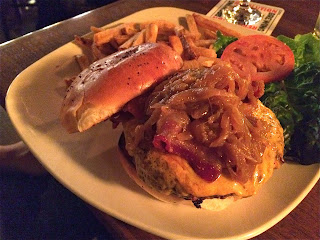 One of my buddies decided on the workingman burger.  This burger was cooked medium (upon request) and topped with an aged cheddar, beer boiled onions, and bacon.  It came with a side of fries as well.  His interpretation of the burger was great... "it is hard to find anything wrong with it."  Upon further review though, he did think the burger lacked a sauce.  Maybe some kind of chipotle ketchup or jalapeño creation?  The bun was also your typical potato bun... not the popular pretzel bun that brings burgers to the next level. 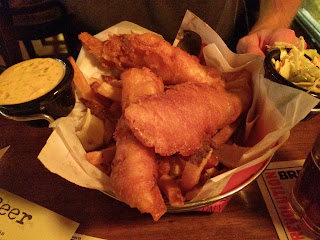 My other friend knew he wanted fish, but with multiple items on the menu, he went with the waitress's recommendation.  The fish and chips were cod fillets battered in a pale ale batter.  They were served with chips aka french fries, a roasted red pepper remoulade, and a honey jalapeño slaw.  The meal was huge.  Three large fish filets that arrive at your table hot.  They cannot even be picked up.  The outer shell had a perfect crisp and the fish just flaked when the filet was bent in half.  My friend was surprised about the jalapeño slaw.  He described it as being shockingly spicy for typical slaw.  The sauces were great, but if it was my meal, a plain tartar sauce would be nice. 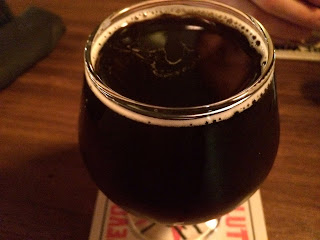 This brown ale is aged in Rum and Woodford Reserve barrels.  This is without question one of my favorite beers I have ever tried.  It has a high alcohol content at 11%.  But, the flavors were incredible... I could clearly taste chocolate and toffee without even trying.  Some undertones of vanilla were also present but that chocolate-toffee combo was addicting.  I tried asking to buy bottles or bombers of this beer, but it wasn't bottled.  I guess I have to go back and try more.

The DOs/DON'Ts:
DO:
- WorKing Mom Brown Ale is a MUST TRY.  Ask if they still have it!
- Definitely come around dinner time and hang around for the wait.  They told us 45 minutes.  One beer at the bar and 30 minutes later, our table was ready.

DON'T:
- Their food isn't high class gourmet or perfect in any way.  So don't expect every aspect of the meal to be memorable.
- DON'T drive here.  First of all, you can drink more beers.  But more importantly, it is impossible to find parking, especially on the weekends.

Posted by Joseph Esparaz at 4:06 PM