A Quick Word:
When people ask me where to go in Chinatown, I tend to recommend one restaurant (and it isn't this one).  Then people ask... how about Tony Hu's restaurant?  My response is "Which one?".  Chef Tony has more than a handful of restaurants throughout Chicago, each featuring a different Chinese region's cuisine.  This trip, I revisited Lao Sze Chuan.  This restaurant is infamous for its spicy theme--from appetizers to entrees.  All of the dishes I tried were great, but not even close to the best in Chicago.  Their flavors are unique and their use of the chili is taken to the next level.  The restaurant itself is very classy, with a much cleaner dining area than what you typically find in Chinatown.  I was disappointed once again with the service.  It took a long time for orders to be taken and for even our water to be filled (difficult when the free appetizer was spicy).  Without question, the food is delicious, but when taking the service into account and the prices, a 4-mile rating is all I could justify. 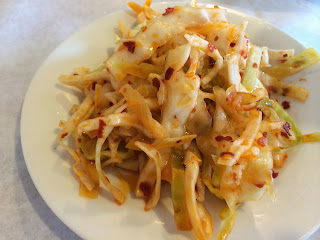 Lao Sze Chuan starts off the meal right.  Every table gets a free appetizer or in my opinion, palate stimulator.  The dish is simple--chopped cabbage mixed with their house-made chili oil.  Somehow this cabbage is both refreshing and spicy.  I kept going back for more and I assure most people do. 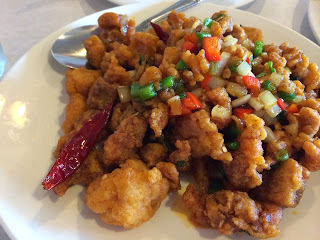 This trip, we decided to try Tony's Chicken with three chili rather than the signature dry chili chicken.  I figured two chili peppers next to the item menu should still be pretty spicy.  The dish arrived with cubes of lightly breaded and well-seasoned chicken that have been pan fried in a wok.  On top is a medley of peppers.  In terms of the chicken, all I can really say is WOW.  Fried perfectly which still kept the meat moist.  The outer crust was crispy and had a nice peppery flavor.  However, the chili medley on top was extremely disappointing.  They used green and red peppers and if that is considered a spicy chili, then I must have missed something.  I mean the flavor was great--a nice sweetness mixed with that peppery chicken, but I was waiting for the heat.  If I had to choose again, I would definitely stick with the dry chili chicken. 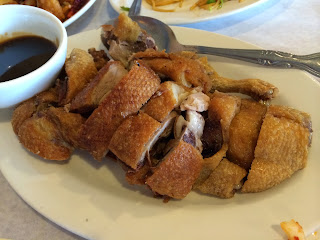 My buddy wanted to try the duck so after scanning the menu, the crispy duck entree sounded the best.  I wasn't exactly sure how it was prepared, but it appeared to be roasted first, then flash fried to give the skin more of a chicharones feel.  It was a half of a duck and was served with a sweeter hoisin sauce.  I loved the crunch factor of the skin.  Their was ample amounts of meat and the bone essentially fell of the meat with a tug of the chopsticks.  I think I was hoping for a little more spicy dish, especially as a sze chuan style cuisine, so I was a little disappointed. Oh yeah, the dish comes with white rice. 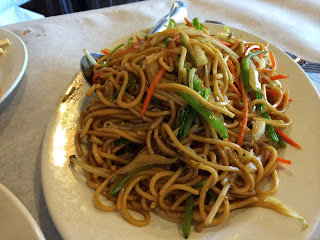 Now this was the dish that also knocked some of my overall rating a little lower.  The fried noodles with mixed vegetables reminded me of Panda Express.  Traditional egg noodles are stir fried with a carrots, cabbage, snow peas, and green beans.  The dish was a little oily for my liking and had an interesting smoky flavor.  That flavor was almost like it was cooked with burnt garlic or even burnt oil. The noodles are a filler, but I would rather eat rice or fried rice with my dish.


The DOs/DON'Ts:
DO:
- The Dry Chili Chicken is by far the best dish.  Didn't order this time, but it is a must have.
- Stick with their recommendations.  The dishes they didn't recommend were average at best
- Validated parking is available as well as cheap street parking

DON'T:
- Don't expect to have a quick lunch.  Slower service = long time spent at the restaurant.