A Quick Word:
With Thanksgiving just around the corner, it was my job to find the pie.  For the past few years, I have been pre-ordering pies from several of the local pie shops.  This year, I was intrigued by the sweet potato praline offered by First Slice Pie Cafe.  So what better way to order pie than going in person and trying what they offer.  Located inside the LilliStreet Art Center, a small cafe featuring salads, sandwiches, soups, and pie fills part of the first floor.  I arrived at lunch time... BIG MISTAKE.  The staff was extremely rude, not even wanting to take a pre-order for my Thanksgiving pie.  And, after saying I wanted to order a bunch of slices, I got a sigh from the cashier and a terrible attitude.  Immediately, I knew the perfect rating was gone.  Luckily, they had incredible pie with a huge variety.  I find it hard to describe dessert, but I gave it at try.  Overall, the pie outweighed the awful service and for that reason I stuck with a 4-mile rating. 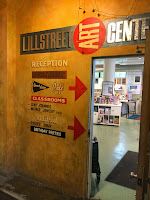 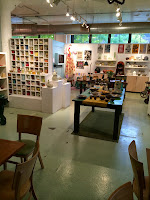 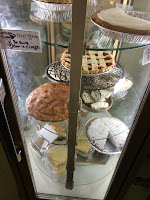 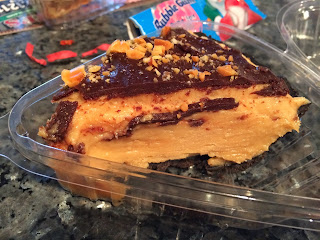 This was without question my favorite slice of pie.  The chocolate peanut butter slice was made with a thick peanut butter filling, almost straight peanut butter.  It was topped with just a thin layer of chocolate.  It was extremely rich and actually coated your mouth just like a peanut butter and jelly sandwich would have done.  I will say, it this was the sweetest of all the pies, maybe too much for some.  But, I can easily see why this is their best selling pie. 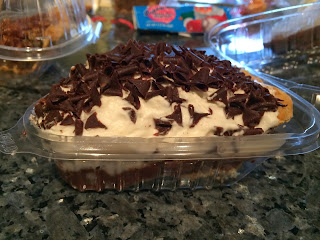 Now for the French Silk... I was amazed with the silkiness of the chocolate portion paired with the light fluffiness of the whipped cream topping.  The chocolate tasted like a melted ghiradelli bar, so imagine some of the richest chocolate flavor.  It is definitely best served at room temperature. 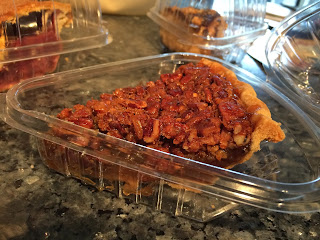 Unfortunately and fortunately, we were stuck with a couple slices of pecan pie.  I say that because somehow I ordered two slices of pumpkin cheesecake and received pecan instead.  I didn't realize though until I got home.  Anyway, the pecan pie was some of the best I ever had.  Perfect balance between the nut topping and that gooey base.  It wasn't overly sweet and the crust was not too dry.  Those two slices actually became the most popular.  Definitely, give it a try. 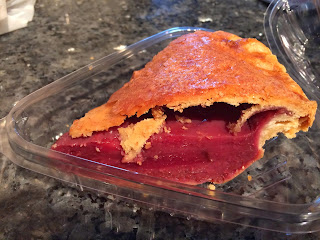 I tend to look for the most random pie slice.  This visit was a balsamic pear pie.  I wasn't sure what the consistency would be at first, and was surprised when no pear slices were actually seen.  Instead, the pears and balsamic were cooked down into a custard-like consistency before being filled into the crust.  This one had a little acidity to it, which cut any sweetness that the pears would have offered. 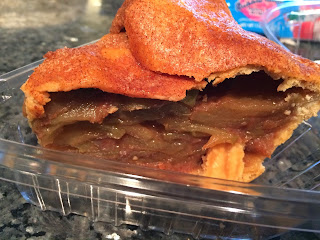 Honestly, for their apple pie, I can't really knock it, but I can't really say much else about it.  Typical apple pie filling with plenty of cinnamon.  I do wish they had walnuts or something to give it more of a crunch.  Not bad, but not memorable either.

The DOs/DON'Ts:
DO:
- Try the chocolate peanut butter slice!
- I want to try their other food. If you do, let me know how it is.

DON'T:
- Don't come during lunch hours.  The service is awful and people are all about cutting in line.  Sort of ridiculous.
- Parking is awful outside.  There is a bunch of free parking around, but with some businesses in the same area, I was lucky to snag the last spot.

Posted by Joseph Esparaz at 9:15 PM