A Quick Word:
I think this restaurant reminds me of  a "small diner in the huge city of Chicago."  They have perfected the huge sandwich, open faced sandwich, and many other diner classics.  Their sandwiches are easily enough for two people and each has enough meat for three.  The atmosphere is very laid back, but this attitude may contribute to the lack of service we received.  I definitely enjoy some of the other delis in Chicago better, but for being a diner first, this one does well.  Now I have a question:  Has anyone tried their egg cream?  Let me know! 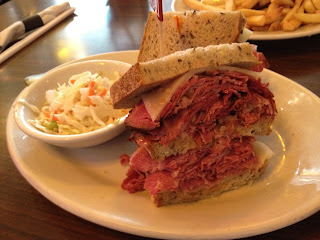 This sandwich reminds me of a typical New York style deli.  It was a double decker on rye bread... the two meats were corned beef and pastrami and it had a nice base of thousand island dressing and swiss cheese.  Personally, the thousand island seemed non-existent.  This made the sandwich a little too dry for my liking.  The swiss cheese was a nice touch and adding a little of slaw definitely helped out.  The slaw didn't have too much mayo and was nice and sweet.  It came with a crisp pickle... great for textural component. 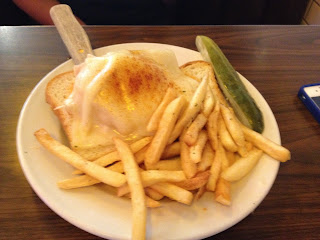 Amazing!  This thick-sliced Thanksgiving-like turkey is served stacked high on white two slices of white bread.  It is a classic open-faced sandwich, so no bread is on the top.  They do, however, top the turkey with swiss cheese and some seasoning.  A thin layer of thousand island was also spread on the turkey, but it didn't really contribute as much as I wanted.  This melt comes with an order of fries, which were freshly fried to order and also a pickle.  Once again, that pickle is key, especially since no vegetables are present on the plate.  I really recommend this melt!

The DOs/DON'Ts:
DO:
- They have an awesome bar and offer drinks from beer to mimosas.  My friend and I each had a drink. She had a mimosa and I a beer.  The mimosa was done well; its always fun starting a day drinking!
- Do ask them to bring your drinks earlier because ours came with our meals and it was a little disappointing.

DON'T:
- Parking is thin in the area... or its expensive.  So take pubic transportation.