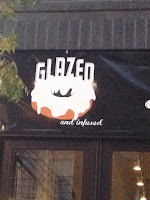 (disclaimer:  pictures were taken at the doughnut shop... but I did try them all!)

A Quick Word:
Are doughnuts the new cupcakes?  Here is another doughnut shop that has recently opened in Chicago!  It appears they focus on more of a contemporary and unique flavor approach but still use the typical doughnut.  Besides having the specific set of everyday doughnuts, Glazed and Infused keeps their customers on their toes by offering a special or two every once in a while.  Overall, I found the doughnuts to have unreal flavors and amazing combinations.  However, the doughnut itself was overshadowed by the crazy combinations.  And for that reason, I couldn't rate it as high as the Doughnut Vault. 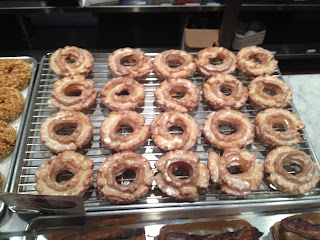 The typical doughnut that many places try to make but don't do very well.  Thankfully, Glazed and Infused make an amazing old fashioned cake doughnut.  It is extremely dense but super moist.  They top it with a vanilla bean glaze which gives a perfect sweetness.  I really enjoyed pairing this doughnut with a hot cup of coffee! 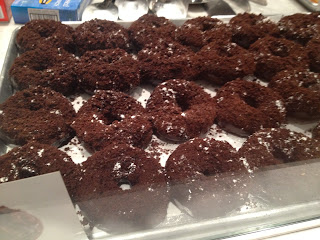 The only reason I got this doughnut was because the lady behind the counter described it as "death by chocolate" in doughnut form.  And wow!  The doughnut was cake-like, so more dense than some of the others.  It had a chocolate fudge filling and was also topped with chocolate ganache.  It is dipped in a chocolate streusel for good measure.  The doughnut was one of the most chocolatey food item I have ever eaten and unfortunately it was almost too rich for the morning.  It would make a great dinner dessert, but for breakfast I probably wouldn't want such a rich doughnut ever again. 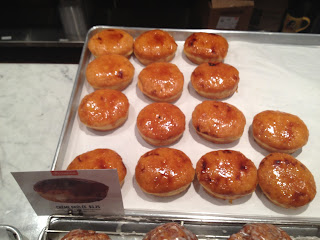 Without question my favorite doughnut at Glazed and Infused.  This modern take on a bismarck doughnut is done so well that I would come back again and again for it.  The creme filling the doughnut is the same consistency and flavor as creme brûlée!  Then to make it even better, they put a layer of sugar on the doughnut and caramelize it with a blow torch.  The crunch top on the soft doughnut is the best way to start a day.  A MUST TRY! 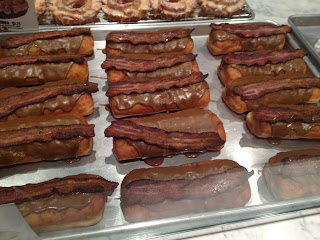 Sounds like an amazing creation, but it falls short.  The doughnut itself was a spin on the classic long john.  A maple glaze topped the doughnut and a thick cut of peppered bacon was the final topping.  The doughnut I thought was too sweet and the maple flavoring was even sweeter.  I didn't enjoy the doughnut at all... in fact, I just ate the bacon separately. 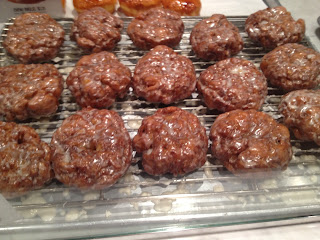 Another typical doughnut at many bakeries, but surprisingly, everyone love it.  After everyone tried the other doughnuts, the apple fritter was left.  And in the end, it was one of the first that was finished.  It had plenty of softly cooked apples slices, cinnamon, and of course their famous vanilla bean glaze.  This doughnut had more substance behind it which makes it another great breakfast option! 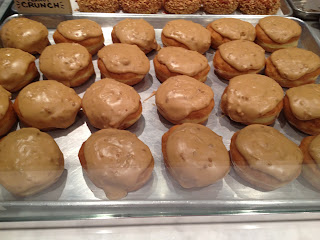 Absolutely INCREDIBLE!  The concept of a PB & J in a doughnut was so simple, but so creative.  This bismarck style doughnut was filled with a raspberry jam and topped with a crunchy peanut butter glaze.  The peanut butter remains runnier than the store bought kind and the crunch from the peanuts gave the needed textural element.  Also, the seeds in the jam contributed to that little crunch that I really enjoyed.  I honestly think everyone needs to try this creation! 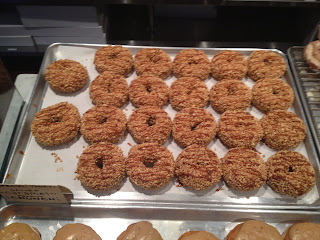 For being the special of the day... This doughnut wasn't anything special.  It was a simple glazed doughnut that was dipped in caramel and chopped peanuts.  The caramel wasn't put on too thick and it also didnt have too much flavor.  The peanuts were peanuts.  And overall the doughnut was just another doughnut that I wouldn't eat again. 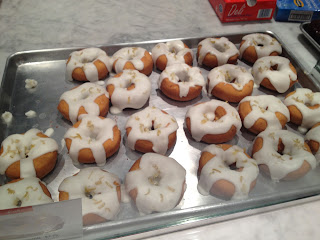 This is another one of the cake doughnuts, but this one is stuffed with a yuzu custard and topped with a lemon glaze and zest.  If you don't know, yuzu is an asian style citrus fruit that is packed with flavor.  I think of them more as a very sour lime and grapefruit.  This doughnut was unreal.  They made sure each part had a citrus element, even down to the garnish with candied zest.  Overall, it was still sweet because of the lemon glaze, but the citrus filling was an amazing contrasting element! 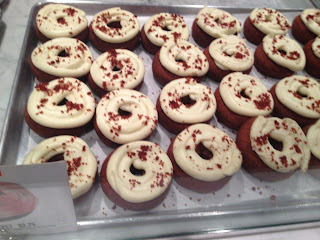 Everyone sees red velvet and everyone has to try it... as did I.  This was exactly what the name says...  red velvet cake doughnut topped with the classic cream cheese frosting.  It tasted more like a dense red velvet cake than a doughnut and the cream cheese was a little too soft for my liking.  Overall it was ok... but I would definitely try most of the other flavors before settling for this one again.

The DOs/DON'Ts:
DO:
- Do try the unique flavors... creme brûlée, pb & j, and the luscious lemon.  These all were not the average doughnut and something different to try.
- Share doughnuts!!! You can try a little bit of everything!

DON'T:
- Don't get here too early.  The line is not as crazy as the Doughnut Vault and it seems as if they have plenty of doughnuts throughout the day.
- Driving to the area is tough... parking is minimal in the Meat Packing District of Fulton St.