A Quick Word:
I absolutely love sandwiches so when I remembered Perry's Deli had the infamous Triple Decker sandwiches, I knew I had to go back.  Unfortunately, the UIC location closed several years back, so I needed to visit their Loop location to get my fix.  Perry's isn't your typical neighborhood deli.  Instead, they feature even larger sandwiches than you see on TV and cater to the quick paced lifestyle of Chicago loop employees. When you see the sandwich, you realize that they are big enough to split and some are even big enough to split and have left overs.  They have everything from fresh carved turkey to traditional corned beef and brisket.  They pile on the sweet slaw and that addicting Russian dressing.  When it comes to sandwiches in the city, these are not the most premium of ingredients, but what they lack in premium items, they make up in portion.  I easily give Perry's Deli a 5-mile rating on quantity, but I decided on a 4-mile rating when you consider everything. 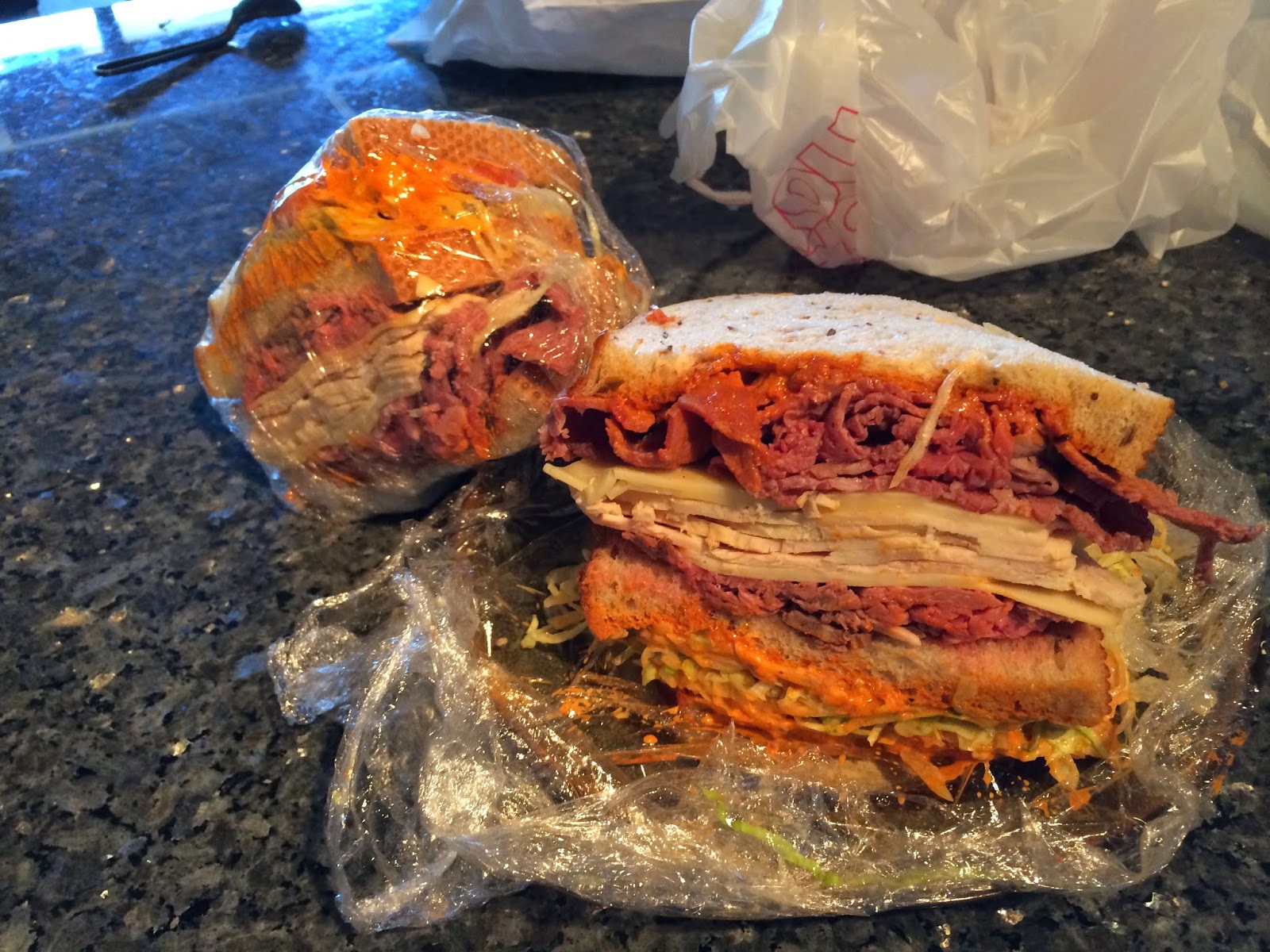 With a description including "Buyer Beware," I knew this was the sandwich for me.  They claim it is big enough to share... and trust me, it is!  The Caveat Emptor is a sandwich where you can get whatever you want, and eat it too.  This masterpiece is a triple decker sandwich filled layered with roast beef, thick carved turkey, and corned beef.  I chose rye bread and asked for extra Russian dressing.  Topping it all off is lettuce, tomatoes, and both muenster and swiss cheese.  I honestly couldn't believe how big the sandwich was.  They wrap each half individually to help hold it all together.  The meat is all thick cut and delicious.  The corned beef has a nice spice to it, while the turkey and roast beef reminded me of restaurant carving station meat.  The Russian dressing is hard to describe... I like to think thousand island dressing with a lot of smoked paprika.  Whatever it is, that orange sauce is out of this world.  I highly suggest getting it on rye bread because it actually supports the sandwich a little better than the other choices.  It comes with a side of either slaw or potato salad.  Highly recommended and at $11.50... it can easily feed you for 3 meals. 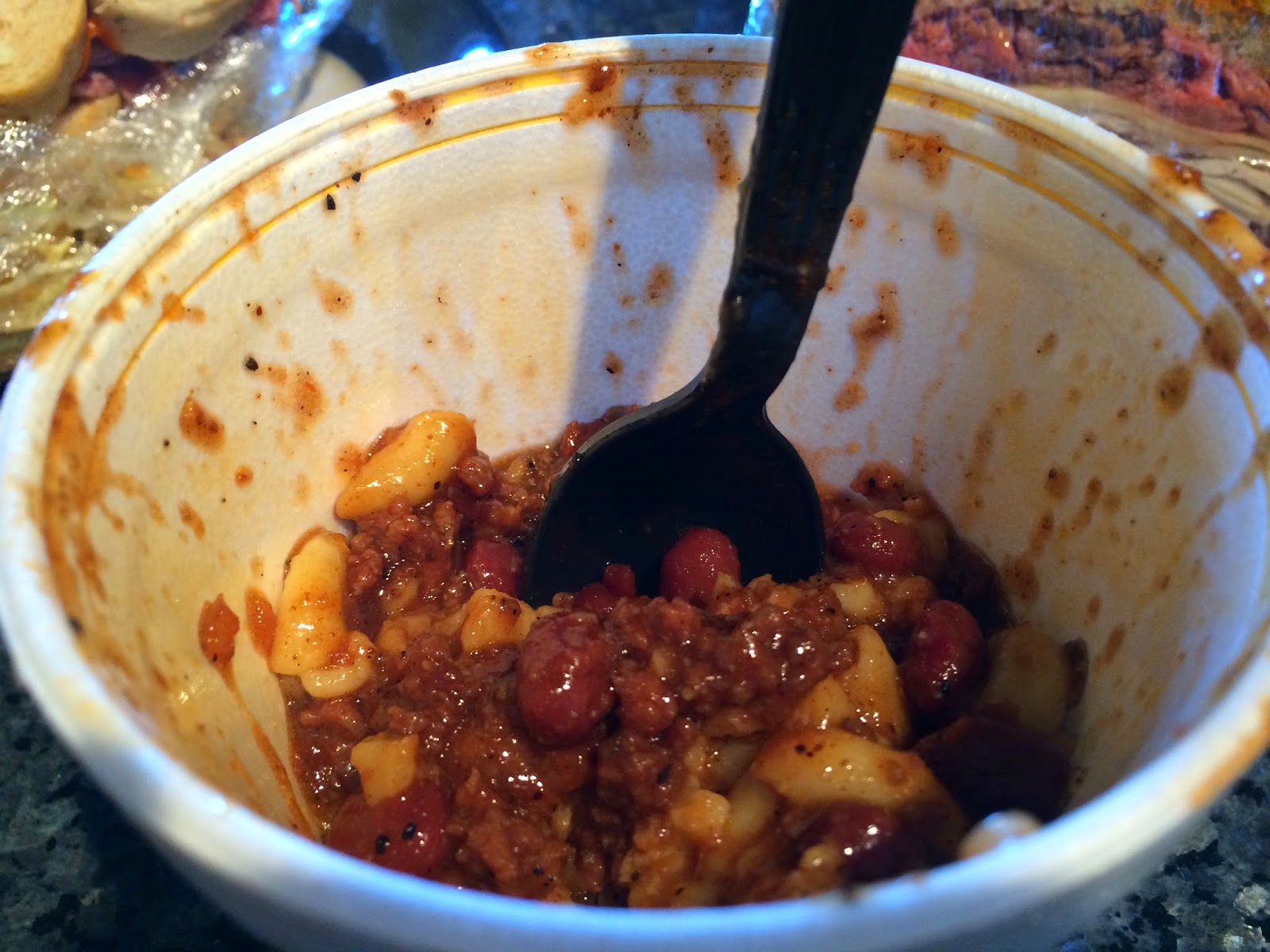 One of my friends recommended the chili mac at Perry's.  I was a little skeptical because their sandwiches are so delicious, but she said it was amazing, so I gave it a try...  And, I am glad I did.  The chili mac is simple... their homemade mac and cheese topped with their homemade chili.  The kicker is the sweetness that shines from I believe the chili.  My friend and I ordered a large to split, which was plenty when also ordering a sandwich.  I really enjoyed the dish because the mac and cheese wasn't overly cheesy.  They do have a lunch special for half a sandwich and a small chili mac... it sounds like a  good deal, but I would just stick to whole sandwich, large chili mac, and then have left overs. Yum!

The DOs/DON'Ts:
DO:
- SHARE!  And, get the Caveat Emptor.  Without question twice the size of other sandwiches and at $1.00 more, it is a steal.
- Get the Russian dressing and ask for it on the side.  Amazing compliment to the deli meats.

DON'T:
- I probably wouldn't go at peak lunch times or if you are in a rush.  The place takes a little time to make each sandwich and we were fighting the loop employees to get in line.

Posted by Joseph Esparaz at 5:47 PM