For one of my away rotations, I had the opportunity to visit Peoria, Illinois.  This smaller city, located in central Illinois, is much bigger than expected and full of great food, friendly people, and of course, a wonderful hospital.  I stayed in Peoria for 4 weeks, but somehow, I only managed to eat out a few times.  Was it because I was addicted to the hospital cafeteria?  Who knows... Anyway, I was very happy with the few meals I did try and will hopefully be back to experience some of the other locals' recommendations. 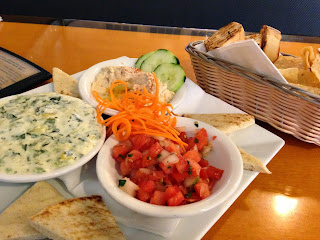 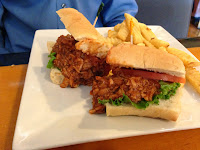 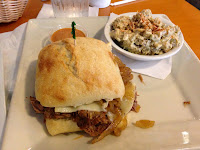 One of my friends mentioned that One World Cafe was one of the most popular restaurants in Peoria.  Their concept is bringing cuisines from many different countries under one roof.  From Mexican to Indian to Cuban... There is a dish for everyone to enjoy.  My friend and I split a bunch of items, including the Cuban pork sandwich, the pulled BBQ chicken sandwich, and the appetizer
sampler.  The Cuban sandwich was incredible. It was a great combination of pulled pork, caramelized onions, melted Swiss cheese, and a chipotle BBQ sauce.  Honestly that BBQ sauce is one of the best I have tasted.  Great smokiness to it.  The appetizer platter had hummus, spinach artichoke dip, and a pico de gallo.  All were standard, average appetizers. 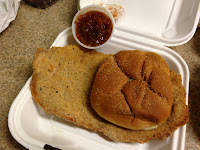 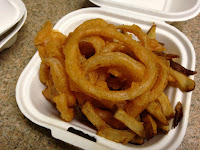 Everywhere I went, I heard people talk about spotted cow. I initially thought it was a reference to the Wisconsin beer, but I soon found out it was a "better than fast food" fast good joint.  I ordered the tenderloin sandwich which was more like tenderloin with a side of bread. It was a huge sandwich with not much flavor except fried breading. I suggest adding mustard to it and their tomato chutney.  That chutney is almost like a sweet salsa.  I do wish they gave a couple extra cups of it. I also had an order of half fries and half onion rings. These were freshly cooked to order, but were nothing out of the ordinary.  Next time I'll stick with onion rings and a milk shake. 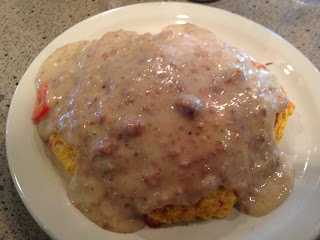 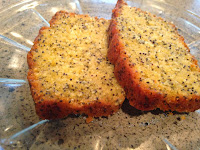 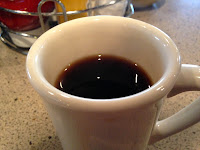 My first meal by myself was at breakfast. I had never eaten at a sit down restaurant by myself in the past... This seemed like the perfect opportunity.  The restaurant was packed so I waited for a table.  Unfortunately I was sat at a four person table in the middle of the crowded restaurant. Plenty of eyes turned my way, but I still ordered my meal.  Lemon poppyseed bread, the skillet breakfast, and a cup coffee eventually made it to my table.  The skillet breakfast doesn't look appetizing, but under all that sausage gravy was an open faces omelet with sausage, mushrooms, peppers, tomatoes, and cheese a top a bed of hash brown potatoes. It was a huge plate, but wasn't that great.  Honestly, I wouldn't order it again... too much gravy just overpowered everything.  It was extremely rich and almost nauseating. The lemon poppyseed bread was the best part. That and a cup of coffee is all I truly needed. 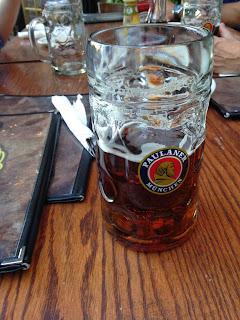 Before heading back to Chicago, I was able to stop in at Kelleher's Irish Pub.  This place is great for relaxing, especially after a long day at work.  Located on the river, it seemed like a very popular venue for businessmen, hospital workers, and the younger college crowd.  They had a beer special... purchase a 1L stein of beer and if you finish it, the refill is 1/2 price.  We also ordered a bunch of food (sorry I did not take pictures of the meal).  Personally, I tried the wings appetizers, the beef bites appetizer, and corned beef sandwich.  The wings were nothing special, but I liked the beef bites. It gave you the opportunity to try both the corned beef and their Guinness roast beef. The portions are generous and the beer selection extensive.  I would definitely be back for a few drinks.