A Quick Word:
Mariscos El Veneo is one of two popular seafood restaurants located across the street from one another in Ukrainian Village.  In my opinion, it is the better of the two, but is also much smaller and just as crowded.  When it comes to the food, one way to describe it is UNREAL.  They are famous for their crabs cooked Narayit style as well as their huge langoustines.  The atmosphere is very laid back with a great BYOB policy.  The place gets a little loud, especially when everyone is drinking heavily.  I highly suggest coming earlier before the crowds arrive and before the place gets a little messy.  Because of the limited table space, especially with such huge plates and the price, I could only give them a 4 mile rating.  The price is definitely fair for the food, but still I wish they offered smaller portions for students. 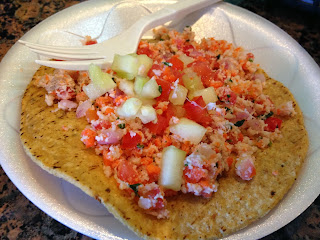 As soon as you sit at the table, the waiter/waitress arrives with glasses of ice water, tostada shells, and a FREE shrimp tostada.  The tostada shell is topped with ground up shrimp, tomatoes, onions, and a little cucumber.  It sort of reminds me of a ceviche with less citrus.  I suggest adding a little bit of their "suicide hot sauce" and a squirt of lime juice.  In terms of the quality and quantity of shrimp, it isn't very generous, but then you realize the appetizer is free.  Like I previously mentioned... think ceviche on a tostada shell. 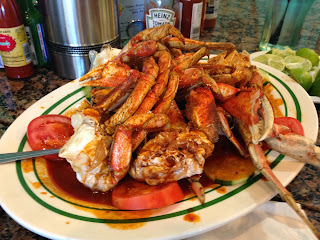 An order of their crab legs comes with I believe 3 crabs cut in half or maybe even more.  They are cooked in a special Narayit style sauce, which reminded me of a spicy broth based sauce with a little bit of tomato added.  The crabs were cooked perfectly.  The shells were not soggy at all, making it a lot easier to break with your teeth.  Tons of crab meat and they were FRESH.  The sauce is unbelievable... not too spicy, but enough heat to put a little sweat on your nose.  I highly suggest pulling the crab meat out and then dipping it into the sauce.  I actually like the sauce from the langoustines better so even try dipping the crab meat in that.  The price is a little steep, especially without a half order option.  So don't be surprised when you see this dish costs about $40. Their other famous dish is made with more than a dozen langoustines split in half.  This dish is also cooked "Nayarit style," but is flavored differently than the crabs.  The langoustines are sautéed in a similarly rich sauce, but some version of dried shrimp paste is added to it, along with a generous amount of black pepper.  I think the shrimp paste is the secret.  It adds a complex flavor that continuously tricks the mind.  Some may think it is a little too salty, so I suggest eating these with rice.  Also, adding some lime to the dish helps cut the salt.  This comes in different sizes from 1/2 order to a party tray.  Four of us shared the crabs and a full order of the langoustines and couldn't have been happier.  Once again, the price may be a little steep. 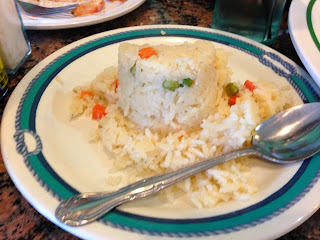 If you are like my family, we enjoy eating everything with rice, especially if the dish has an amazing sauce.  And after a few bites of seafood, we knew we needed rice.  Their mexican rice side dish is very simple.  Their rice is cooked using chicken broth (rather than water) and a few carrots and peas give it some color.  The chicken broth is key because it adds a salty flavor to the rice.  Honestly, it can be eaten on its own, but adding some sauce and shrimp to the rice is something you should try.

The DOs/DON'Ts
DO:
- Everyone gets a free shrimp tostada!
- It is BYOB... some ice cold Victoria or other beer would be amazing to eat with the Crabs.

DON'T:
- The hot sauce here is RIDICULOUSLY spicy.  It does have great flavor as well, but be careful.
- There tends to be a wait because of the small restaurant, but DON'T go across the street because this one is the best.

How far would I walk for this place?