A Quick Word:
With the name Table, Donkey, & Stick, I got the hint that this restaurant would focus on the popular farm-to-table concept.  And like most restaurants in this category, their menu changes with whatever is available at the fresh markets.  From a rotating selection of cheeses and charcuterie style meats to their unique appetizers, everyone will find something that intrigues their taste buds. I received many recommendations prior to dining here with the best one involving their wanderteller meats and cheese boards.  These are absolutely delicious and without question the best part of dinner.  They paired nicely with the few cocktails we ordered and all were accompanied by the freshest produce/sauces.  Unfortunately, the meal progressively got worse. The appetizer was on the overcooked side and the entree was as tough as rubber. I feel all the attention is given to selecting wonderful cheeses and none to preparing their larger entrees. They do have a beautiful back porch area which I highly recommend dining on, especially on a cool summer day.  Even though they had some of the best cheeses/meat boards and a beautiful, secluded atmosphere, the huge misses on the appetizers and entrees gave me no choice but to rate them at 3.5 miles. 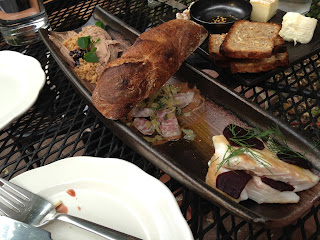 One of my good friends told me I couldn't miss the wandertellers.  After scanning the options, my friend and I decided on ordering three of the meats, meaning we get a toasted baguette with them.  We chose (from left to right) the duck liver mousse, the goat sausage, and the smoked trout.  All of them were incredible!

My favorite was the smoked trout.  It was served with sliced beets and a few sprigs of dill.  The pieces of trout were thick cut and had a wonderful smokey flavor.  And, the dill was the perfect compliment that added a little bite.
Now, for the goat sausage, it came with a roasted onion puree.  This reminded me more of a salami... so charcuterie flavors were prominent.  You have to dip the sausage in the onion puree otherwise it is a little too gamey for most.
And finally, the duck liver mousse was without question the richest of the three.  The generous portion of mousse was topped with a sweet crumble and a blueberry jam.  This mousse needs to be eaten with the toasted baguette to cut some of the rich, irony flavor.  The blueberry jam was a little on the sweeter side... I have had a similar dish with a sour cherry jam; it was much better.  The crumble added the necessary contrasting texture.  Just remember a thin spread of this dish goes a long way. 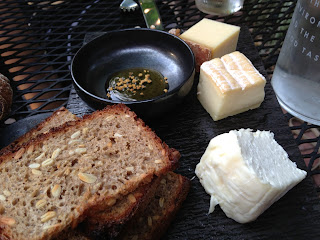 What pairs better with smoked meats and spreads than cheese?  We decided on three cheeses:  Robiola Rochetta, Anton's Liebe Rot, and unfortunately, I forgot the last.  The cheeses came with a few slices of toasted flax seed bread and a couple tablespoons of honey.  Without question, this was the second best dish of the night.

The robiola rochetta was a mixture of cow, sheep, and goat milk.  This cheese had a similar consistency to a creamy brie with more of a grassy flavor to it.  Spread a little of this cheese on one of the toasted, flax seed slices of bread and drizzle a little honey.  It is unbelievably delicious.
The next cheese, the liebe rot, was a cows-milk based cheese.  Creamy in texture, but pungent in smell.  In fact, I think it would be a little too strong for most.
As previously mentioned, I forgot the third cheese we chose.  I don't think you could really go wrong with what you choose so my recommendation is be adventurous! 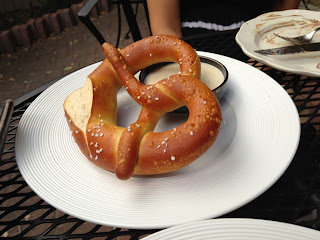 The same friend recommended the pretzel fondue appetizer.  And once the waiter recommended the same dish, we knew we had to try it.  The dish was simple... a fresh baked pretzel with rock salt and a cauliflower gruyere cheese dip.  They call it fondue, I call it cheese dip.  Anyway, the pretzel arrives at the table still warm with the perfect balance of butteriness and saltiness.  Unfortunately, that is where the positives of the dish ends.  The cheese dip itself tastes like cauliflower... not one trace of gruyere flavor is left.  And the cauliflower flavor isn't even that good.  We enjoyed using the pretzel to eat some of the duck liver mousse rather than finishing that strange veggie cheese. 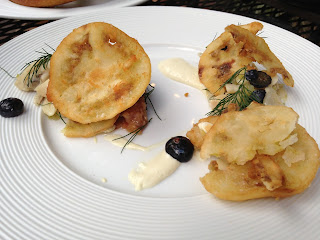 The frog leg appetizer was one of the stranger items offered at Table, Donkey, and Stick.  The legs themselves weren't strange, but the other ingredients were.  The frog legs were paired with a bacon jam, thinly-sliced fried green tomatoes, pickled garlic gloves, and blueberries.  The best part of this dish was the contrasting textures and flavors... in one bite, you get sweet, savory, meaty, creamy, and crispy.  The concept was amazing, but the execution fell way short.  My friend and I both found the frog legs to be tough, meaning overcooked?  The fried green tomatoes was nothing but batter and crispy... no tomato substance behind it at all.  The blueberries were sloppily scattered on the plate and the bacon jam was more essentially a fatty tablespoon of chopped meat.  Yes, I will say eating them in all one bite was tasty, but the components, themselves, were just average. 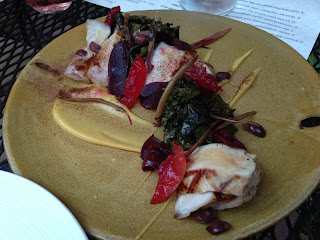 This may be one of the most disappointing dishes we both tasted in a while.  The grilled pork loin was one of the entree portions we decided to share.  The dish itself consisted of about eight slices of grilled pork loin served with grilled creamed kale, roasted beat slices, olives, and a kola nut jus.  The pork was as tough as shoe leather with not much flavor besides salt.  Honestly, I didn't even want a second slice of the pork.  Luckily, the dish's accompaniments were much better.  And in fact, the grilled cream kale was delicious.  It was an interesting play on the classic creamed spinach.  The grilled flavor was prominent and cut some of the overly salted meat.  The kola nut jus had a strong earthy, almond flavor. I don't really know how it helped the dish, but it didn't hurt it either.

The DOs/DON'Ts:
DO:
- DO order the Wandertellers and the Cheeses.  Without question the best part of the meal.  Next time I will be ordering just these with their cocktails.
- The Manhatterhorn and G&T are great summer cocktails.
- Outdoor sitting is available.  The patio is perfect for a cool, summer day!

Posted by Joseph Esparaz at 8:38 AM