A Quick Word:
Somehow, this southern restaurant evaded my obsession of country-style dishes.  Huge hearty brunches is something I love and I expected Wishbone to continue the trend.  Unfortunately, I was let down.  My family and I walked into a wonderfully decorated restaurant with that southern feel to it.  The menu looked great (minus the fact that there is no chicken and waffles).  However, two things really annoyed me.  First of all, the portions... I know we are in a country of obesity, but seriously, when you get a plate with half of the plate showing and you are extremely hungry afterwards... isn't that also a problem?  Luckily, the prices were a little on the friendlier side, so ordering an extra side wouldn't be too much of a problem.  The other part that annoyed me was the service.  They aren't very attentive, at least at our table.  I mean this place is always packed despite the small portions.  Either there aren't many places people know about that serve this style of food, or people are being more healthy.  I suggest trying Big Jones for southern breakfast.  I guess I will give them an average of 3 miles for my rating. 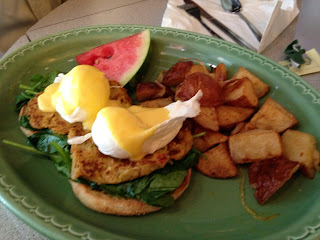 Immediately, my parents both decided on the crab cake benedict... and they knew it would be big enough for them to share.  And, it was!  The meal consists of an english muffin split in half that is topped with crab cakes, spinach, two poached eggs, and the traditional hollandaise sauce.  It comes a side of the house potatoes and choice of toast (my parents chose the raisin cinnamon swirl).  I managed to snag a bite of their meal which was delicious.  Real crab meat with enough to give the cake a nice seafood flavor and texture.  It wasn't made of too much binder so you actually feel like you are eating crab.  The eggs were poached perfectly and the hollandaise sauce was rich.  Personally, I thought the dish was enough for one person, but for smaller appetites, sharing is an option. 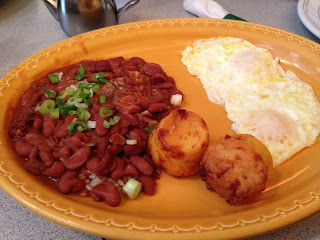 One of my favorite southern dishes is cajun red beans and rice.  Seeing it for breakfast, I was immediately sold.  Their spin on red beans and rice includes the New Orlean's style red beans slow cooked with chicken andouille sausage, peppers, and onions.  It is ladled on top a bed of white rice, served with two eggs over easy, and I opted for the corn muffin, rather than biscuit or toast.  I was very disappointed with the overall size of the meal.  They skimp on both rice and chicken sausage which is disappointing.  At least give me enough rice to make me full.  Two small corn muffins were essentially thrown on the plate with one of them breaking into small chunks.  The muffins do have a nice crust on the outside and real corn kernels, so this was definitely the best part of the meal. 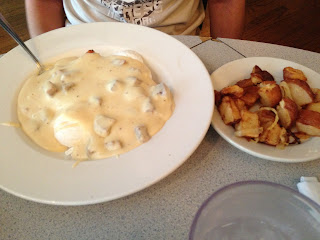 My little bro is all about some kind of southern creation when it comes to breakfast.  This time, it was the southern benedict.  Rather than the typical english muffin, they top a freshly baked biscuit with ham and two eggs and then drown the entire dish in sausage gravy.  Rich is the first thing that comes to mind, especially with all the thick gravy.  But it is tasty.  Unfortunately, after a while, the flavor is to one-note that you kind of lose your appetite.  Maybe spice of the meal with a side of fruit or a corn muffin or something.  Giving griddled potatoes just adds more oil.  Or maybe reduce the gravy and add some freshness... tomatoes and spinach?  Just a thought. 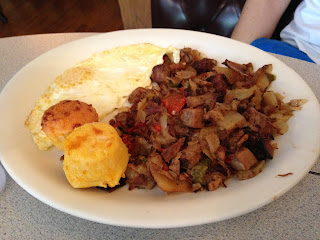 If I could have ordered a second breakfast, I was going to choose the smoked beef brisket hash.  Luckily, my older brother picked the dish... allowing me to have a few bites.  This hash was made with chopped beef brisket, house potatoes, peppers, and onions.  He decided on two eggs over easy and corn muffins for his starch.  This dish was a little on the smaller side as well.  The brisket had a smoke flavor, but it wasn't as prominent as I would have hoped.  Everything else was essentially standard and with being standard in a hash, it was just average.  Looks like my two choices flopped.


Oatmeal with Brown Sugar and Raisins 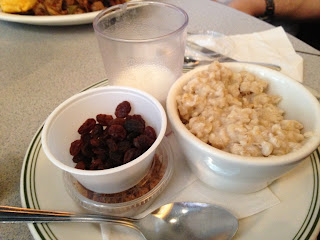 My brother's wife was smart, she chose to have an order of oatmeal and a smaller order of biscuits and gravy.  The oatmeal was great... slow cooked whole oats served with a side of milk, brown sugar, and raisins.  You could add other mix-ins, including pecans, bananas, or flax seeds at an additional cost.  It is hard to mess up oatmeal, unless you add too much water, but not to worry here, it is just the right consistency. 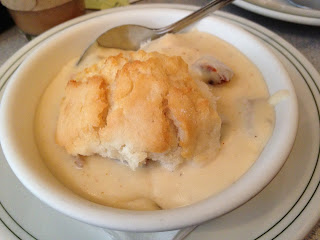 Similar to the southern benedict listed above, the biscuits and gravy is essentially what the name implies.  A biscuit was placed into a smaller soup cup and covered with their sausage gravy. This was the right amount because of the richness of that gravy.  I would suggest this side over the southern benedict just because you can order something else and not feel like you are eating the same thing over and over again.

The DOs/DON'Ts:
DO:
- Do come early for brunch on weekends.  This place fills up fast and they do not take reservations.
- Driving is easy to this area; plenty of parking so no worries on that end.

DON'T:
- Don't have too high of expectations.  The food is average, but there are much better brunch places in the city.  (Even for southern/soul food style food)