A Quick Word:
What I tend to look for in a brunch restaurant is quantity and greasiness. These two characteristics are great whether you had a heavy night of drinking or just want to hold yourself over for a couple of meals.  Hash House A Go Go has a few dishes that highlights these qualities, but also a few that miss it entirely.  Their motto is "Farm Food with a Twist," which is definitely exemplified by their use of fried chicken and meatloaf in a number of their dishes, including a meatloaf eggs benedict.  The atmosphere of the restaurant is real relaxed with pictures of tractors and corn filling the walls.  Also a more industrial feel is kept with plenty of aluminum wall panels.  The location keeps this place fairly busy especially on weekends, so just be aware.  Unfortunately, some of their food doesn't have the same impact of flavor as their signature dishes.  For that reason, I felt as if they focus on just a few dishes when preparing meals.  And, that is why I decided that a 3.5 mile rating is fair. 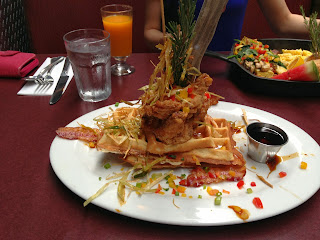 As soon as We arrived at the restaurant, I anticipated chicken and waffles being on their menu.  Not only was it on the menu, it was considered one of their specialities.  Their dish is made up of a bacon waffle tower (yes, there are 4 waffles with bacon pressed right in). They then layer two sage fried chicken breasts and finally top everything with fried leeks and a warmed maple syrup.  This dish is absolute heaven.  The size is incredible by itself, but the flavor takes it up to the next level. The sage is definitely noticeable in the chicken and the aroma from the rosemary stem that holds everything together reminds you have that thanksgiving smell.  The waffles could stand alone and adding crunchy, salty leeks also helps being together that sweet-salty combo everyone craves.  This is one of my all time favorite breakfast plates and I highly suggest it to anyone. 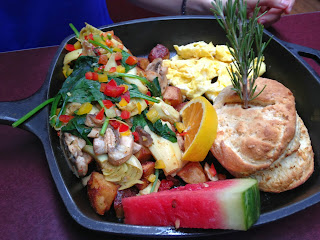 With the restaurant name including the word hash on it, how could you not try their house hash?  My friend thought the same way and she ordered the veggie version.  It was made with mushrooms, artichoke hearts, sun-dried tomatoes, and fresh spinach.  All the ingredients were tossed with their hash potatoes and the dish came with two eggs and a biscuit.  The ingredients were definitely all fresh... Not farm fresh, but much better than other breakfast joints. However, the flavor was well short of spectacular, and probably closer to average at best. All I tasted was the oily potatoes until you bit into a sun-dried tomato (maybe the one key ingredient that made you come back for more). The biscuit is on the drier side but definitely addicting. These biscuits are huge so you will for sure have plenty of food. 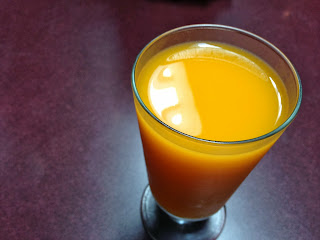 Fresh squeezed juices were on their menu with one being tangerine. We figured we would try it to see how it compared to everyday orange juice. It was a little on the sour side, but that's because no sugar was added.  I never know if the cost of fresh juice is worth it especially when it hits the $4 price level. Anyway, give it a try I guess.

The DOs/DON'Ts:
DO:
- Stick with their featured dishes... They have multiple dishes featuring their sage fried chicken and meatloaf, including a meatloaf benedict. I know I'll be trying that one next.
- Share dishes!  These portions are some of the biggest I've seen for breakfast.

Posted by Joseph Esparaz at 1:11 PM