For the final post on the food scene of Dayton, Ohio, I decided to lump together more of the ethnic foods of Dayton.  This will include a nicer seafood spot, a Middle Eastern restaurant, some BBQ that can compete with the best, and much more.

I wasn't able to try them all... skipping out on the Indian Buffet's and the well-established Thai restaurants.  But, the places I went to are definitely be places I would consider visiting again the next time I end up in Dayton. 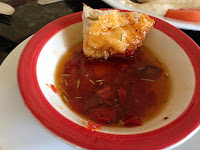 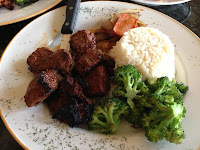 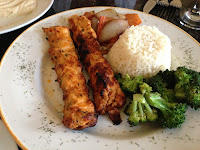 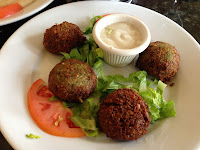 One of my brother's favorite restaurants was Pasha Grill.  Located in The Greene Mall, they specialize in Middle Eastern Cuisine.  They have a special Turkish-style bread that is served prior to the meal with an oil-sundried tomato dip.  The falafel appetizer was disappointing.  I found the falafel to be undercooked and expensive.  But, the entrees were definitely worth the cost.  We ordered one beef kebab and one chicken kebab dinner to share amongst us three.  Both are well seasoned, not overcooked, and come with both rice and vegetables.  The broccoli was simply steamed, but the rice had a nice flavor... I think it was dill.  Hummus was our choice for a tasty appetizer; I think it is nearly impossible to mess up.  I wish the sandwiches were available at dinner time... my brother said this is a new change that he wasn't even aware of. 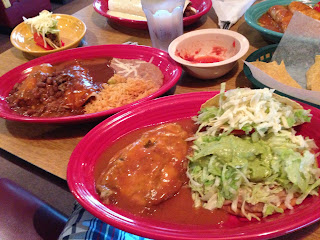 I was craving Tex-Mex style food one afternoon and asked my brother where he would recommend going.  Immediately, both him and his wife mentioned El Rancho.  We planned on heading here following church and I am so glad we did.  He recommended I ordered the Special Dinner... supposedly it was a huge dinner plate.  I was skeptical; usually I am never full leaving a Mexican restaurant unless I order two different entrees or some appetizers.  When the special dinner arrived I was SHOCKED.  It came with the following:  one chalupa, one enchilada, one taco, one tamale, one chile relleno, Mexican rice, and refried beans.  And of course, the chips and salsa that all Mexican restaurants give.  There was so much food, my meal came on two separate plates.  At first, I was embarrassed by how much I ordered, but as I started eating, I was glad I chose this option.  Each was made with ground beef (probably the only way to keep the cost at $12).  The sauces were all delicious with just enough spice to satisfy.  The chile relleno had a way too much cheese; in fact, it was nauseating how much it had.  It isn't the most authentic Mexican food, but for being Tex-Mex, and for the price, it sure hit the spot. 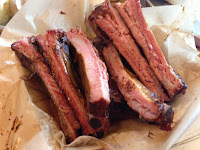 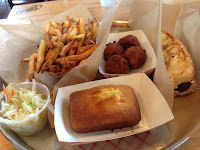 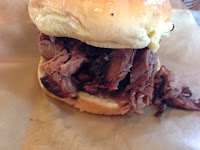 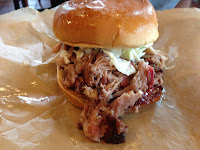 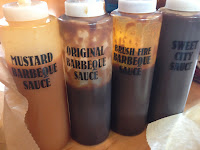 When it comes to BBQ, I feel confused by the south side scene of Chicago.  There, I have encountered some of the best BBQ, but also some questionable meals.  In Dayton, I found several locations for one establishment known as City BBQ.  My brother, his wife, and I went on a Tuesday night for their $1.15 per rib special.  And we ordered just about everything available on the menu!  Somehow, we were able to finish a dozen ribs, a pulled pork sandwich, a sliced brisket sandwich, a hot link, hush puppies, fries, corn bread, and cole slaw.  I really enjoyed this place because nothing was covered in BBQ sauce... instead, they provide 4 different sauces at the table and also a warmed up version near the drink dispensers.  I preferred the brush fire and the mustard-based sauces, both served warm.  Definitely dip the ribs into these and you will not be disappointed.  In terms of tenderness, the ribs were spot on--they had a good bite, but were not chewy.  The pulled pork and brisket sandwiches were both tender, non-fatty, and also had a good dry seasoning cooked right in.  Place the slaw on the sandwiches and choose your sauce.  The hush puppies and corn bread were easily the best of the sides, with the hot link coming in close third.  This is a place I would frequent if I lived nearby. 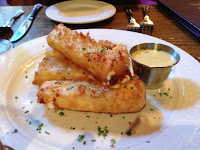 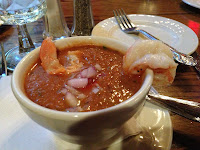 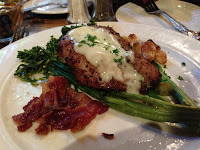 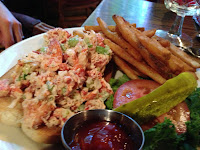 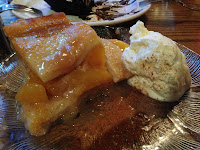 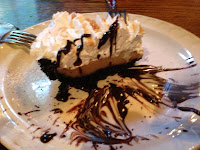 After being denied by a couple of randomly closed Italian restaurants, we ended up at Jay's Seafood in more of the downtown area of Dayton.  This restaurant is located in an old warehouse building and attracts more of the older crowd (at least when we were there).  But, this is supposedly the place to come for good seafood.  I stuck with the prix fix menu for $26.  I chose to have the shrimp gazpacho, the monk fish entree, and peach pie for dessert.  Some of the other dishes ordered was the mozzarella cheese strip appetizer, the lobster roll, and the chocolate peanut butter pie.  For my prix fix, the shrimp gazpacho was probably the best part... spicy, cold tomato soup was topped with three boiled shrimp.  The monk fish itself is a little oily, which was expected, but the accompaniments of bacon and garlic cloves didn't really fit in the dish at all.  The mozzarella sticks was just enough for our four person table with the thick cut mozzarella being lightly melted from the frying process.  The lobster roll was huge and served with fries.  A little too much celery and fillers for my liking, but still a great sandwich.