A Quick Word:
After a nearby restaurant failed to offer vegetarian options for the night, my friends and I decided to go to Taqueria El Taco Naco.  One was a regular and she recommended the torta.  I have been on a search for the best torta in Chicago and was excited to try it.  After being greeted by the owner (awesome PR), we placed our order to go.  While waiting, we were surprised with freshly cooked tortilla chips and salsa.  This was an amazing gesture by the restaurant owner.  Unfortunately though, the restaurant was still empty except for us sitting at one of their tables.  Overall, the food was pretty good.  The torta was easily the best meal, and singlehandedly brought my rating to above average.  I think for the area, it is a great mexican restaurant. But when comparing it to other places in Chicago, Pilsen is still the place to beat. 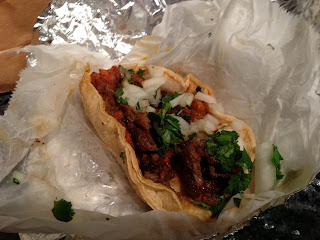 Since the restaurant was named after this menu item or vice versa, I had to try it.  It had chorizo, asado, and chicharrones.  It was all generously packed in two steamed corn tortillas and topped simply with chopped onion and cilantro.  The concept was awesome, but the chicharrones were too hard to enjoy.  They were crispy like they should have been.  Make sure to add the red salsa because the green one is not spicy at all. 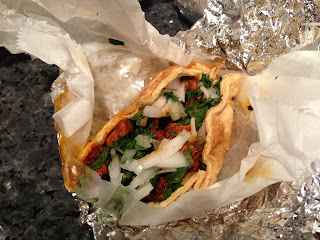 Another standard taco meat served at most taquerias.  The al pastor is pork that is seasoned with adobo and usually grilled with pineapple or some sweet element.  The meat was definitely flavorful in this taco and I thought it was significantly better than the taco naco.  Once again, I kept it simple by ordering it with just onion and cilantro.  You can't go wrong with this choice. 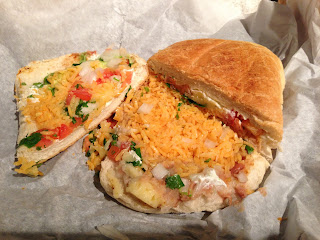 Even though I am still on my search for the best torta in Chicago, I decided not to just steal a few bites from my friend's torta (mainly because we already stopped by Phil's Last Stand for their $1 char dog charity special).  After a couple bites, I was disappointed... disappointed that I didn't buy my own.  The torta here is incredible.  The bread was special because it was soft, fresh, and not greased in oil like most of the other tortas I have tried and loved.  Also, the size was unreal.  For only $5, you get a torta that is easily 1.5x the size of the other places I have tried.  I can't wait to go back and try one of the meat ones. 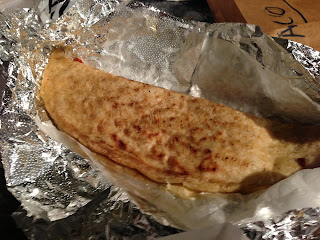 The cheese quesadilla here is a little different that most would be used to.  The tortilla is extremely thick as if they used two or three corn tortillas.  They lay the cheese on thick which is unfortunate because after a few minutes, it cools and solidifies to a chewy mess.  You must add salsa to it.  It was ok, nothing amazing... just ok. 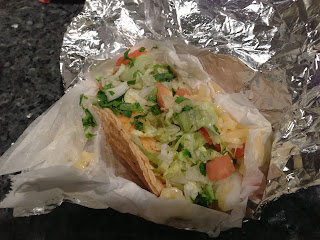 This vegetarian option is loaded with basically everything except meat.  A double corn tortilla taco is overflowing with beans, rice, lettuce, tomato, onion, cilantro, cheese, and salsas.  I would imagine vegetarians would love it, but for me... it was missing something.  Probably just the meat. 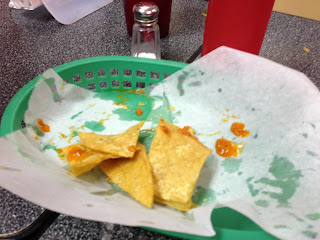 The hospitality at the restaurant was beyond amazing.  The owner not only remembered my friend who used to be a regular when she worked in the area, but also they offered us chips and salsa (despite ordering for take out).  They brought us glasses of ice water upon request and even held a short conversation... more than just the typical "do you need anything else" comment.  The salsa was spicy but good.  It was more of a puree rather than chunky which is ok.  The chips were fried fresh with oil still dripping off the chips.  They needed a little napkin dry but after removing the grease, they were warm and delicious. (sorry for taking picture after eating most of them)

The DOs/DON'Ts:
DO:
- Ask for the red salsa.  The green one is not very flavorful and not spicy at all.  Red is where it is at!
- Order the Torta.  I think it is the best "bang for your buck" and something different than other restaurants in Chicago.
- Tons of free parking so feel free to drive.
- Cash only!

DON'T:
- I wouldn't suggest ordering the taco naco special unless you like to chewy for hours when you get  hard as rock chicharrones in your meal.