A Quick Word:
Sultan's Market is one of the best Middle Eastern restaurants in the city.  They offer a huge menu that is cooked fresh and everything is at a reasonable price.  The specialize in both sandwich versions and full dinner plates, in which the latter is a much better deal.  For some odd reason, I rarely make it out to Sultan's but when I do, I always leave happy and with a full plate of left overs.  Overall, I couldn't give it a perfect rating, mainly because of the sub par pita and the OK sauces.  If somehow they could improve their pita to "Naf Naf quality" and change their sauces to meet the "Pita Inn standard" then it would without question be the perfect middle eastern restaurant. 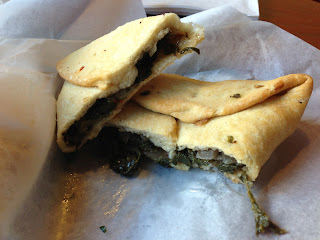 When we arrived, the spinach pies were just being pulled from the oven.  I always get one when I come to Sultan's and they are addicting.  It is a simple dough on the outside, and it is filled with stewed spinach and other mixed veggies/spices.  It is nothing like spanakopita because there is no cheese.  It is much freshier and lighter.  I highly recommend this as a light appetizer. 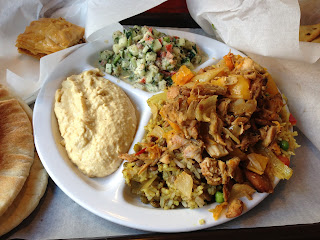 I love chicken shawarma, and I find Sultan's Market to be some of the best.  The chicken shawarma dinner costs $7 and comes with enough food for easily two people or two great meals.  As you can see by the picture, the plate comes with rice (I chose to have half Rice w/ Lentils and half curry basmati rice), tons of chicken shawarma with onions and orange bell peppers placed directly on top of the rice, choice of salad (I choose the jerusalem salad), a huge helping of hummus, and pita.  Everything was incredible.  The different rices are spiced heavily and both go really well with the chicken.  The jerusalem salad is very refreshing with lots of cucumber and tomatoes in a light cream sauce.  And the hummus was as fresh as can be.  I usually eat less than half the dinner because I have already stuffed myself with a spinach pie.  Great value and great taste! 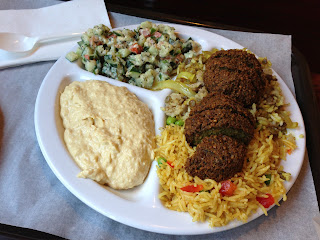 Another one of the dinner plates Sultan's Market offers... the vegetarian combination comes with similar option as I have listed above, but instead of meat, it comes with two huge falafels that are sliced into thinner, more manageable pieces.  The falafel here is freshly fried.  They only fry a few at a time so that each plate is as fresh as it can be.  The outside has a nice dark brown crispy crust and the center is some of the softest yet textured falafel I have had.  The spices are great.  Making little falafel sandwiches with this dinner is easily the best idea.  Just order a few more pitas for 50 cents a piece and enjoy! 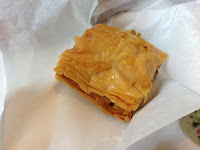 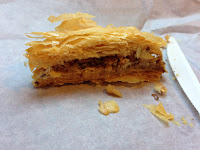 For the past week, my roommate and I have obsessed over baklava (eating pieces and pieces from a local Detroit favorite).  After running out, we were on the search for some good baklava.  Here at Sultan's Market, the baklava is not only reasonably priced ($1), it is fresh.  We ended up ordering a piece and the consistency was great.  It was softer and room temperature.  The filo was extra crispy.  And overall, it wasn't too chewy.  I definitely recommend paying the buck for a piece. 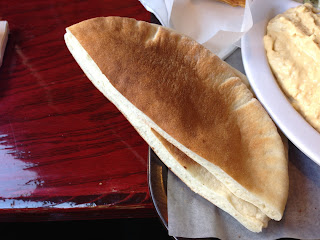 One of the big disappointments of Sultan's Market is their pita.  I am unsure if it is made at the restaurant, but it just isn't as fluffy or tasty as other places like Naf Naf.  It does do the trick and allows the rest of the food to shine, but it is still a huge disappointment for me. 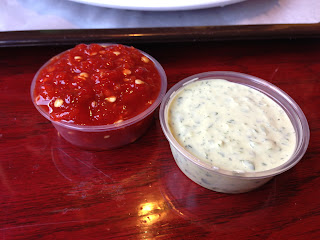 The sauces here aren't the best.  The tzatziki sauce (cucumber sauce) was the better of the two, but it was still bland.  The hot sauce was not hot at all.  Nothing comes close to Pita Inn's sauces. Luckily, the food didn't really need sauce so it didn't hurt the rating too bad.

The DOs/DON'Ts:
DO:
- Bring CASH...  It is a cash-only establishment and you don't want to withdraw from their ATM and get charged those ridiculous fees.
- Without question, order the Dinners... They tend to be 3 bucks more than the sandwich but you get easily 3 times the amount of food.
- Think about sharing or at least bringing some home for leftovers.

DON'T:
- The spicy red sauce isn't that great.  I wouldn't plan on using too much of it.
- Plenty of parking on the street so don't worry about that issue too much.