A Quick Word:
The concept of Gyu Kaku sort of confuses me with either Japanese or Korean BBQ.  I guess I don't really know the difference, but regardless, the food here is delicious.  And, the best part about Gyu Kaku is the HAPPY HOUR MENU!  Monday-Thursday, after 9:30pm, this restaurant has a happy hour menu which offers tons of options for a significant discount.  I believe everything we ordered was under $6 which is incredible especially for the city.  I was disappointed in the hostess of the restaurant though; she was rude and wouldn't seat us despite our reservations.  In the end, all the grilled meats turned out great and the price wasn't too steep.  Definitely come after 9:30pm for cheap food and cheap drinks! 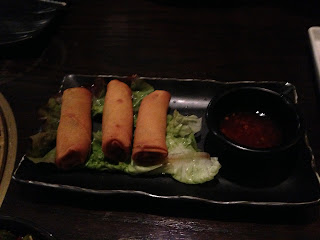 So we started the meal off with this "weird" spring roll.  The inside was more like a ball of mush rather than the typical shredded vegetables found in other veggie spring rolls.  The shell was a nice crisp to it and dipping it into the sweet and sour sauce was good.  Nothing special for these rolls but another staple appetizer for many. 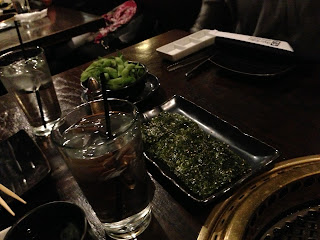 Here are a couple typical asian appetizers. The edamame (pictured in back) did have a little bit of salt seasoning added.  I always enjoy eating them.  The seaweed (pictured in front) actually had some seasoning on it too.  I was pleasantly surprised and everyone seemed to really enjoy it. 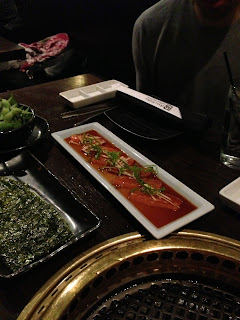 This was another one of the appetizers we started with.  This plate of sushi grade salmon was sliced thinly and topped with warm oil. I wasn't sure about why they claimed it as seared, but regardless, it was very fresh salmon.  I wasn't too impressed with this recommendation and probably wouldn't order it again. 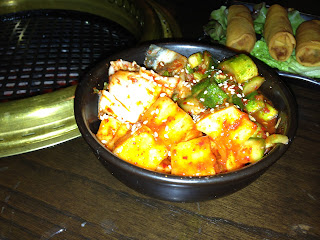 I have been lucky to try lots of kimchee at different restaurants and of course wouldn't miss the opportunity at Gyu Kaku.  A bowl of various vegetables arrived at the table with the typical red kimchee color.  Overall, it wasn't spicy at all and didn't have a strong fermented flavor.  I consider it to be an extremely mild kimchee... one that everyone should try, even if you dislike it.  And for a couple bucks, it is a great way to break up all the grilled meats. 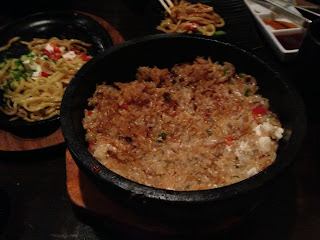 This traditional Korean rice dish was incredible.  We ordered two different styles, one with beef and one vegetarian.  The waitress will ask the table whether to make it spicy or mild.  I suggest spicy because even when we said spicy, the rice dish wasn't hot at all.  The bowl it is served in is extremely warm so be careful.  Let the rice cook down in the hot pot so that it develops the signature burnt edges. Mix it all together and enjoy it with more hot chili paste and the meats from the grill.  I personally preferred the vegetarian one because I could add whatever meat to mine without mixing too many flavors. 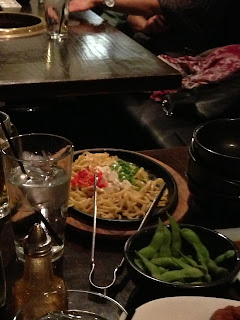 This dish was a little disappointing.  Thick soup style noodles were cooked on a hot searing pan to probably try and give it a little crunchy texture.  Garlic was the only flavor I actually noticed.  Probably won't order this one again either. 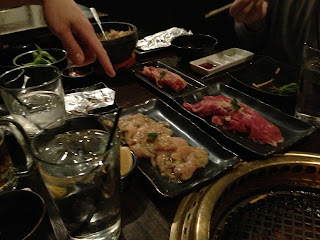 Most of the Asian BBQ places offer some sort of kalbi.  I never really understand where the cut of meat is from or how they flavor it.  The waitress did recommend it, and it was good.  Honestly, I am unsure how else to describe it. 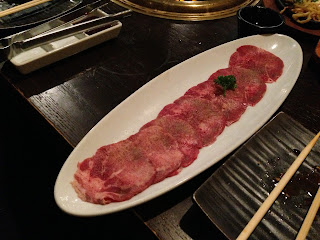 Another excellent cut of meat.  The beef tongue was so thinly sliced that it cooked in just seconds.  It was probably the most tender fleshy cut of meat we had, but did lack on flavor.  I think everyone enjoyed eating this dish and I am glad we chose it.  For anyone that has never had tongue and wants to try it... I suggest this dish because it is very mild. 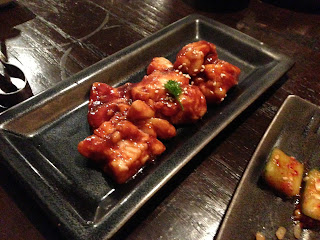 Without question, the intestine was the BEST dish of the night.  With so much fat, cooking the intestine on the grill made an amazing caramelization.  And, with the already sweeter miso marinade, this dish was the perfect balance of richness and crunchy sweetness.  It takes a little longer to get that dark golden brown caramelization so be patient!  But don't leave it on too long because it will catch on fire. 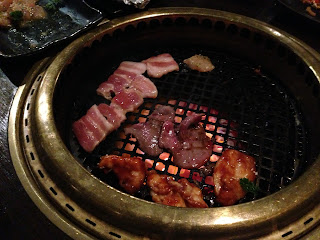 The pork belly was another great dish to grill.  It also has a high fat content that caramelizes under the extreme heat.  This was sliced thinner than the intestine and did have some meat on it too so make sure to cook it much less than the intestines.  It reminds me of a nice sweet piece of bacon.

So my friend really enjoys the chicken and orders a bunch of it every time.  It was not really seasoned at all, but dipping it into the spicy sauce made it amazing.  It was probably just the sauce, but I found the chicken to be the best vessel for it.  One main problem though is the chicken takes forever to cook.  After waiting several minutes, I was still worried about eating raw chicken, which I definitely did a couple of times.  Making it too thin wouldn't work either, so I guess patience is what is needed.


Yakishabo Brisket Shio
(See above picture middle dish)
Recommended by one of my friends, the brisket was ordered.  I really liked it because it would grill up in just a few seconds and had a sweet sauce that the meat was marinated in.  This made it tasty without adding anything additional.  Definitely get a couple of these to fill up on! 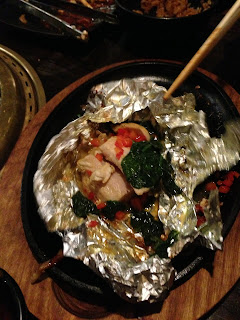 Grilling fish at Gyu Kaku is really interesting.  They wrap up the fish, in this case mahi mahi, with spinach, chopped tomatoes, and some garlic. You place the aluminum pouch on the grill and wait for it to "steam up."  Flip it a couple of times, and the fish is cooked.  The mahi mahi was a nice filet with the miscellaneous vegetables that I mentioned.  Overall, the steam grilling cooked the fish well.  It was tender and actually had some good flavor.  I definitely enjoyed this one better than the salmon described below.


Salmon
(Sorry, not pictured)
Just like the mahi mahi, the salmon comes in an aluminum foil pouch for steam grilling.  Unfortunately, I wasn't a big fan of the salmon, mainly because of the light seasoning and also the raw cooking temperature.  A couple of friends at the table enjoy salmon on the rare side, but I sure don't.  Even if we cooked it longer, I still think the seasoning was nearly non-existent.  More bold flavors are needed. 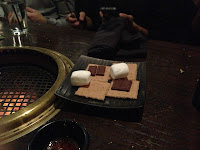 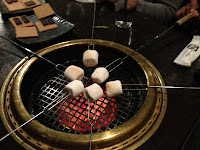 What more is there to say?  Chocolate, marshmallows, graham crackers, and fire.  Always a good dessert, but I did wish a more authentic japanese dessert option was available.


The DOs/DON'Ts:
DO:
- As emphasized throughout this post... DO come for HAPPY HOUR!  After 9:30pm on weeknights, they have the happy hour special where most of the meats are significantly discounted!  It is the greatest deal by far... so don't miss out.
- Make sure to order Bibimbap; it is incredible here and you can substitute to make it vegetarian.

DON'T:
- I would order slowly... The food comes out quickly and sometimes the eyes are too big for your stomach.