Before heading to any vacation spot, I do a little researching on a few of the most popular restaurants, "dive" restaurants, and food network featured restaurants.  It wasn't long before I stumbled across a couple that I knew I had to try.  And, with a recommendation from my girlfriend, Tiffany, for a unique pizza joint, our schedule was instantly filled with great restaurants. 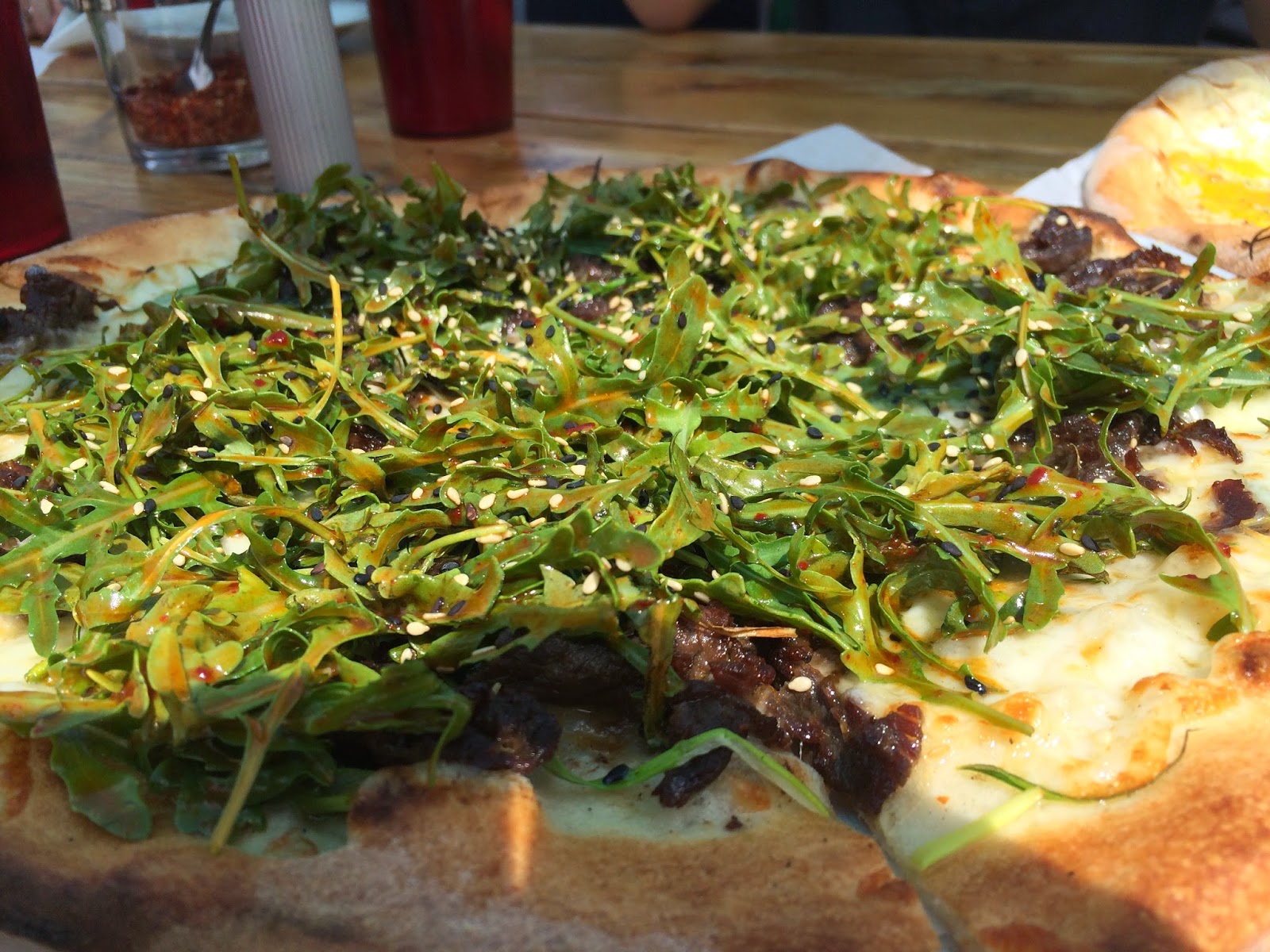 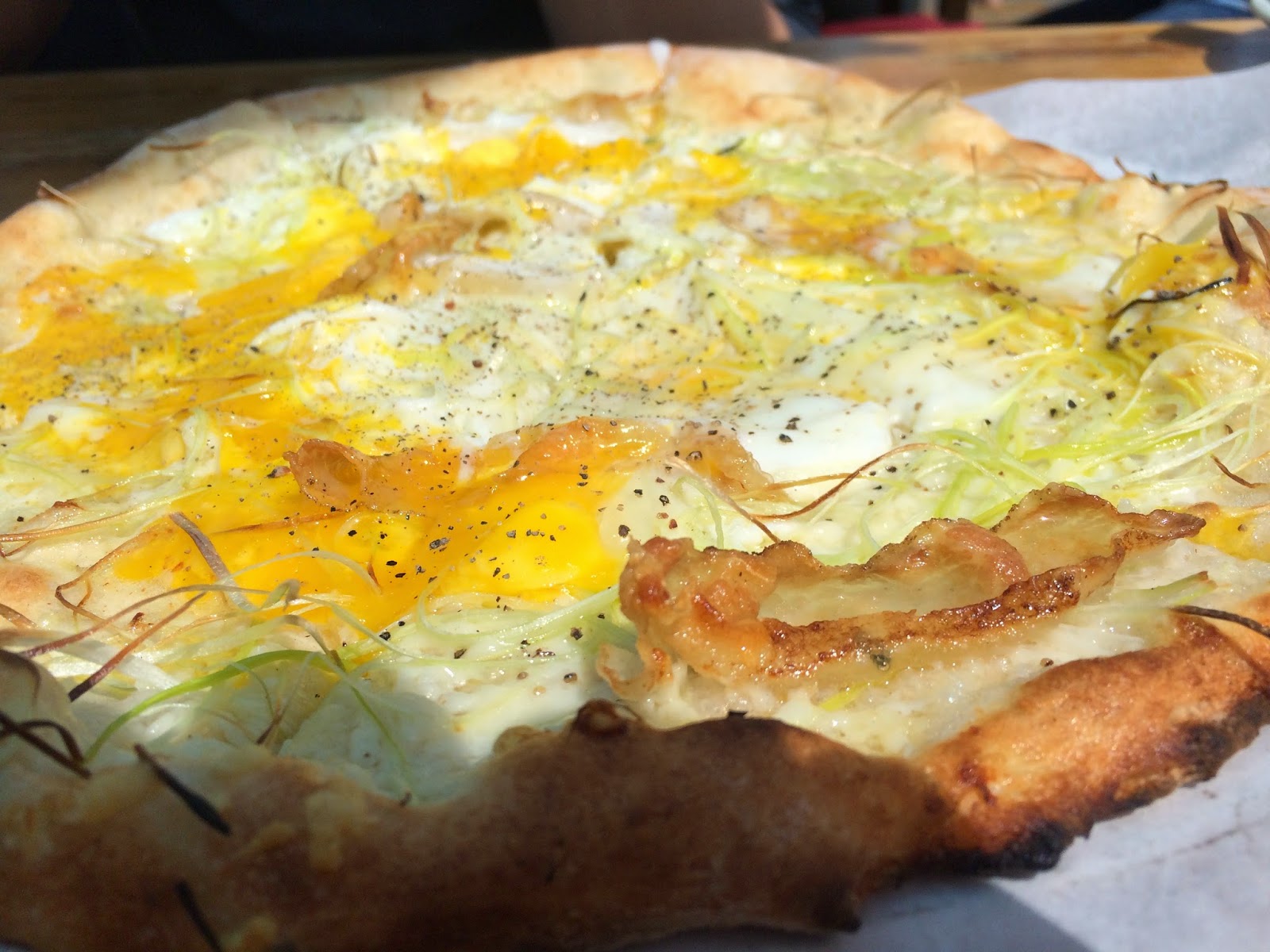 Soon after arriving, we indulged in our first foodie restaurant.  Featured on multiple Food Network TV shows and highly recommended by Tiff, this pizza place was a no-brainer.  A group of friends met us there, giving us the chance to order several types of pizza (well, a couple types and a couple variations).  The must-try-attraction, (besides the Photo Booth), is the infamous Korean BBQ pizza.  It was topped with beef short ribs, mozzarella cheese, scallions, arugula, and a soy chili vinaigrette.  We had one on the normal crust and one on gluten free... and I will have to say, the gluten free crust is addicting and delicious.  I see why one of Tiff's best friend likes it much better.  The other pizza we tried was the sunnyside.  This pie is made with guaniciale, sunny side up eggs, pecorino cheese, and leeks.  Unfortunately, this fell short of being great.  The first couple bites weren't so bad, but I was left with a strong raw egg flavor that was more unpleasant than tasty.  I think they have much better options, so skip out on the egg and enjoy the Korean inspired pizzas!


A little info about the Photo Booth.  You can order a ticket from either the bar or from your waitress.  I believe they cost $3.00 and it comes with 3 pictures per strip and two strips.  The tradition has been to take one home and leave one on the picture wall, but it is your choice.  Also, when taking a picture, you will notice the screen shutter close and a delay before the flash.  Don't move until the flash has gone off! 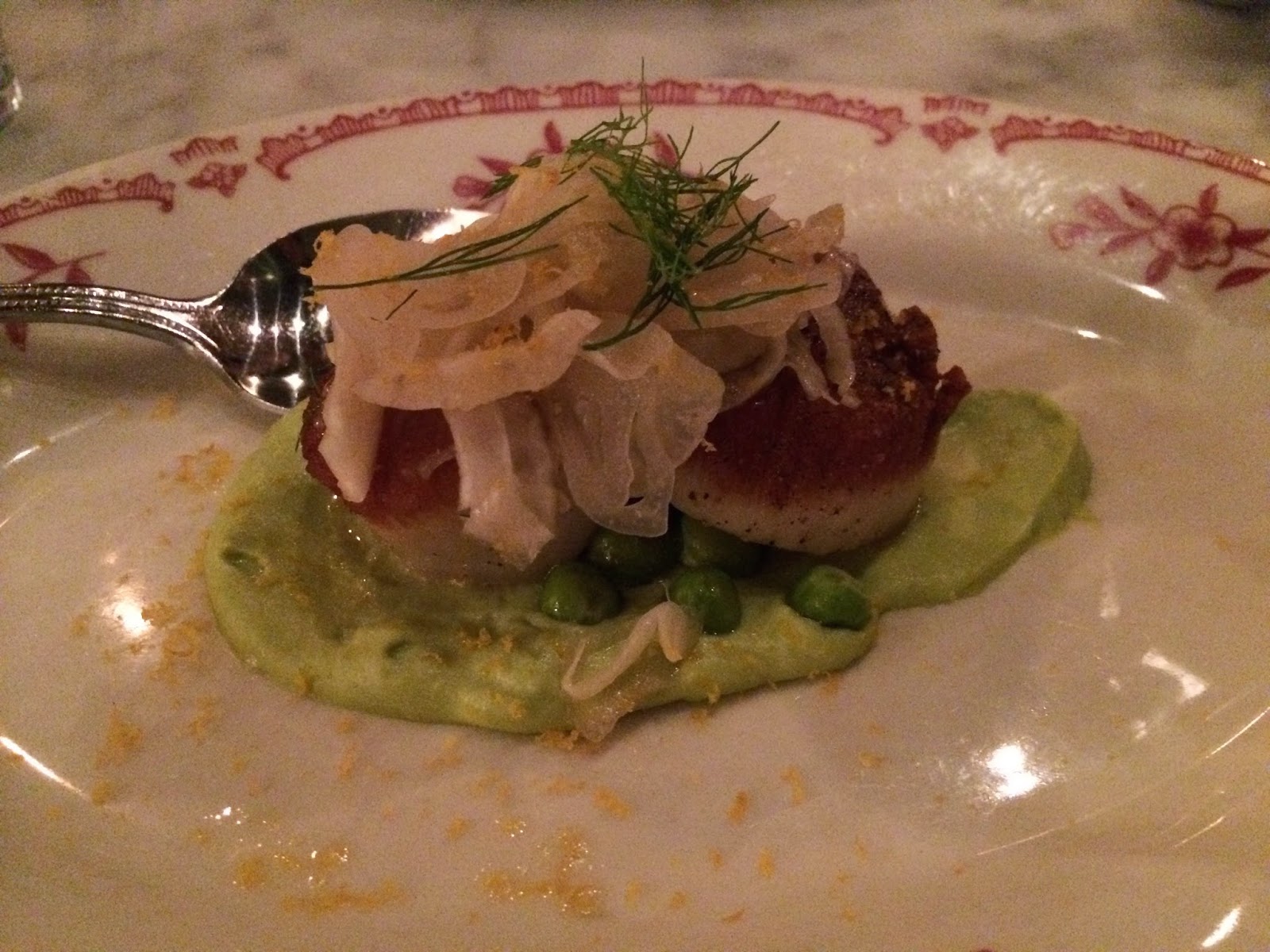 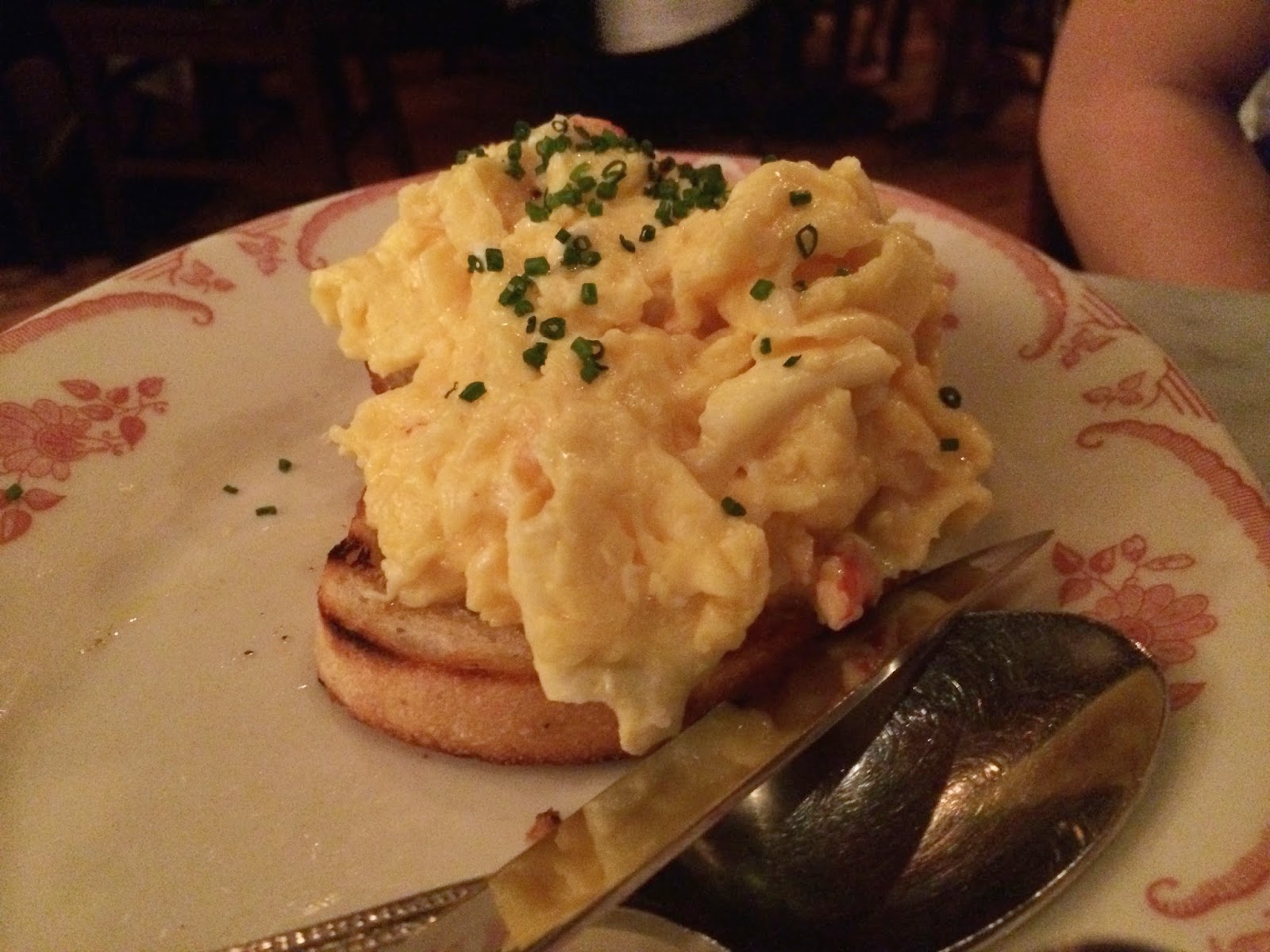 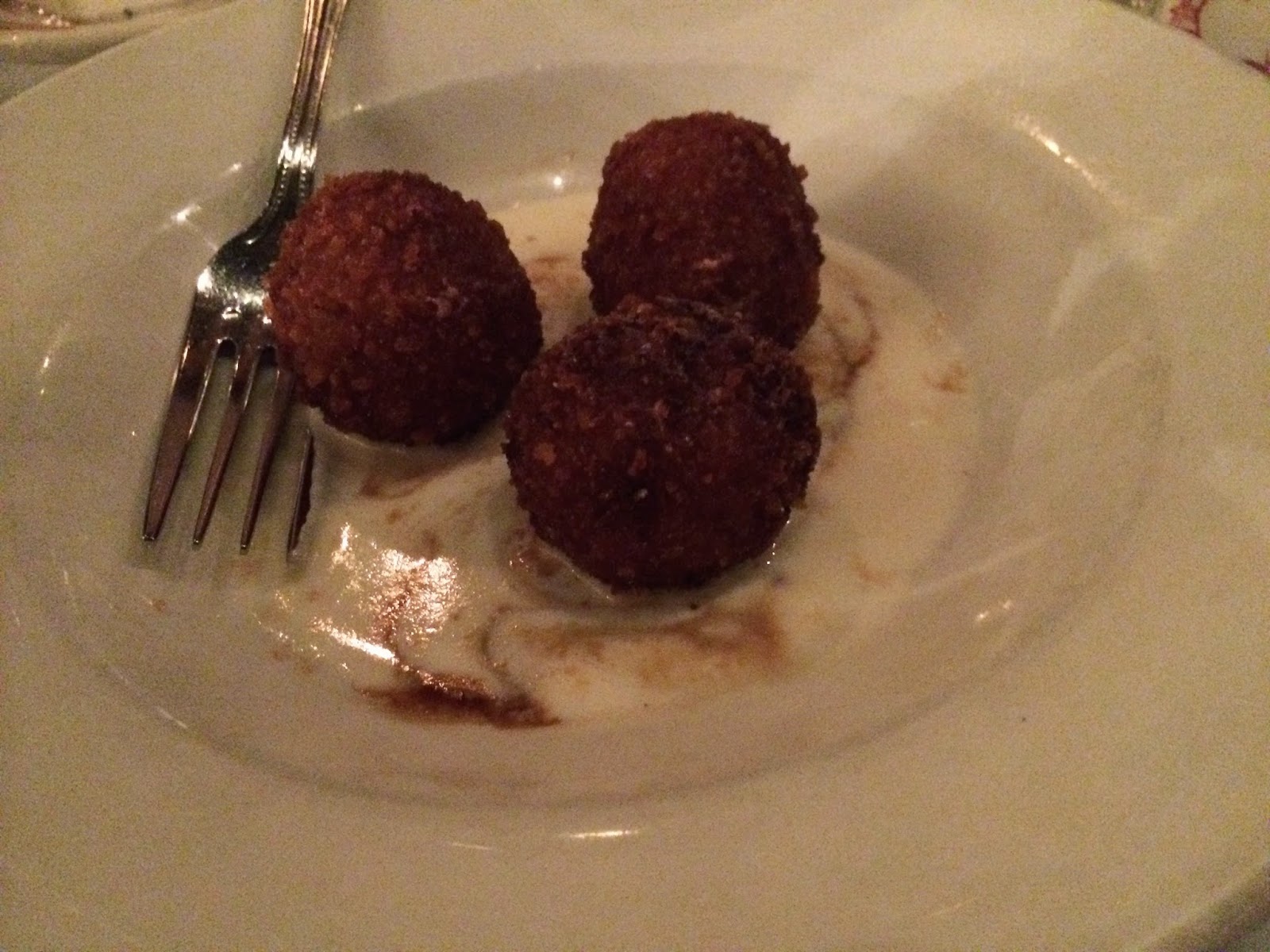 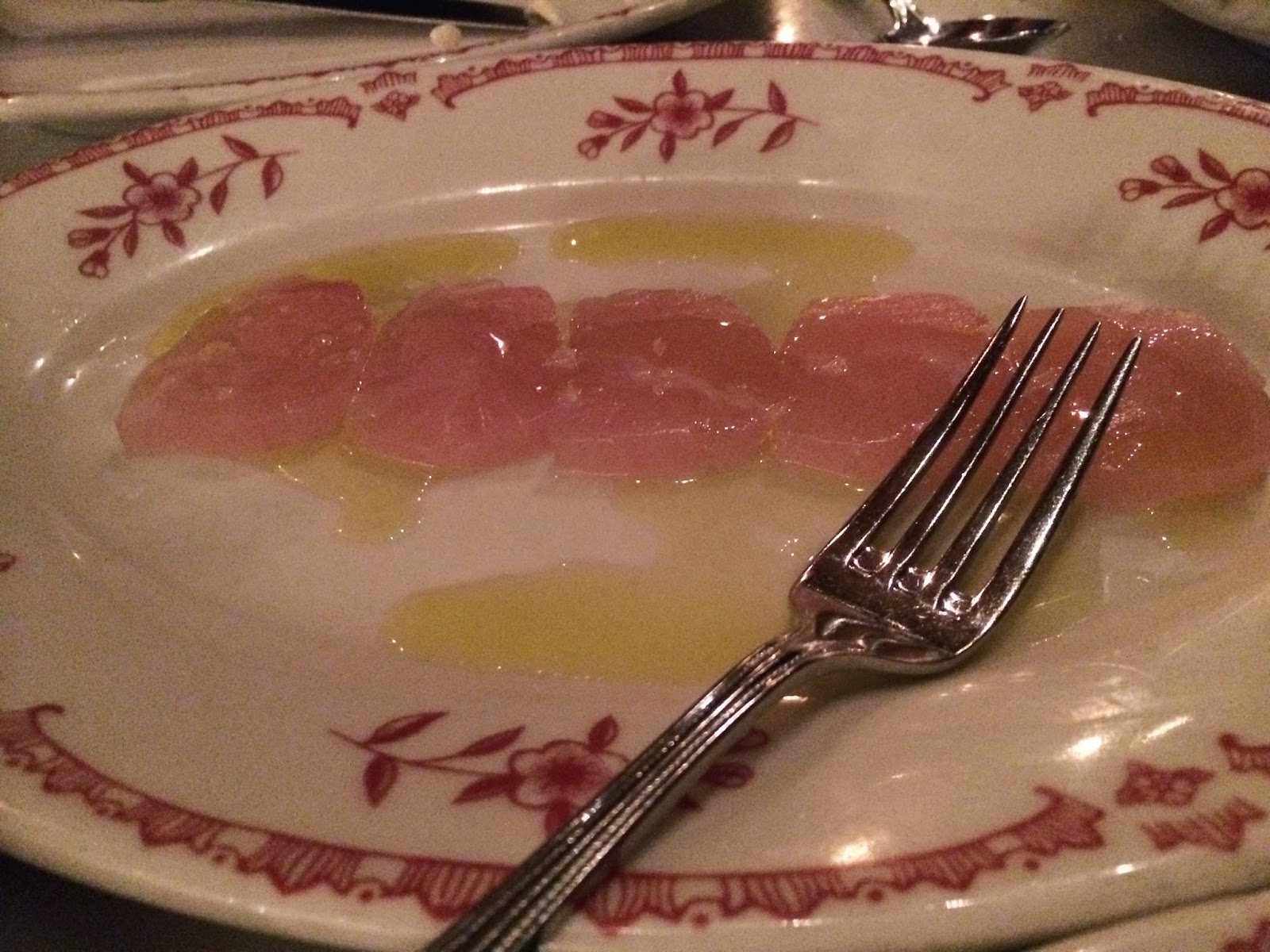 Almost all websites for "top restaurants" or "most popular" in Minneapolis pointed towards Bar La Grassa.  Three of us came to the restaurant, giving us the opportunity to  order more small plates to share.  Tiff's friend, Emily, high recommended the soft egg and lobster bruschetta.  The rest of the smaller appetizer-like dishes were all a gamble.  The bruschetta is made of a crostini topped with a mixture of scrambled eggs, lobster, and truffle oil.  The dish had an interesting flavor palate.  You first get the traditional toasted bread, but soon after, the truffle flavor appears, and finally, the creamy egg and lobster is noticed.  I loved this dish.  The seared scallops with mint-pea spread was perfectly cooked.  I really enjoyed the pea spread, but thought this dish was a little small for the price. The blue marlin crudo was as fresh as can be.  They sliced the fish on the thicker side and topped it with a little olive oil and sea salt.  The simple preparation allowed the seafood to shine.  Our final appetizer was their play on an arancini.  Made bite size, the deep fried risotto ball had a little pancetta and was served in a liquified tallegio cheese.  The cheese may be a little strong, so be aware. 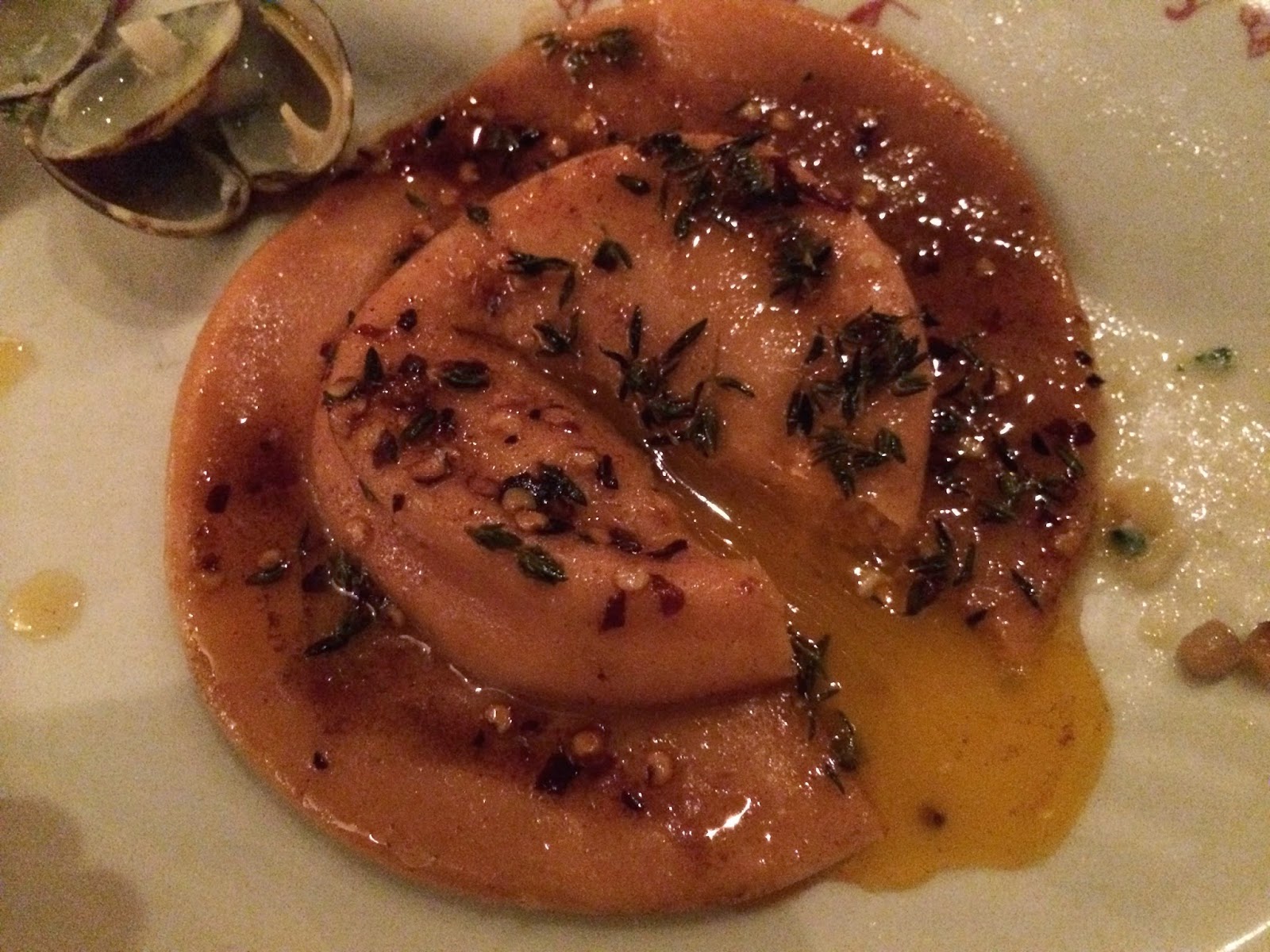 As soon as I saw a raviolo, I knew I would order it.  Their version is called the "nduja raviolo.  'Nduja is a spicy sausage spread and raviolo is just a big ravioli.  Here, they fill it with a soft egg yolk which somehow remains liquid even during the cooking process.  The reviews from my fellow diners were mixed here.  I loved the pasta, but I also love egg yolk and spicy dishes.  I think it was a little on the adventurous side because most are used to cheese/meat filled raviolis.  I still highly suggest giving it a try, but remember, the large version comes with two raviolos, so you may need to order more. 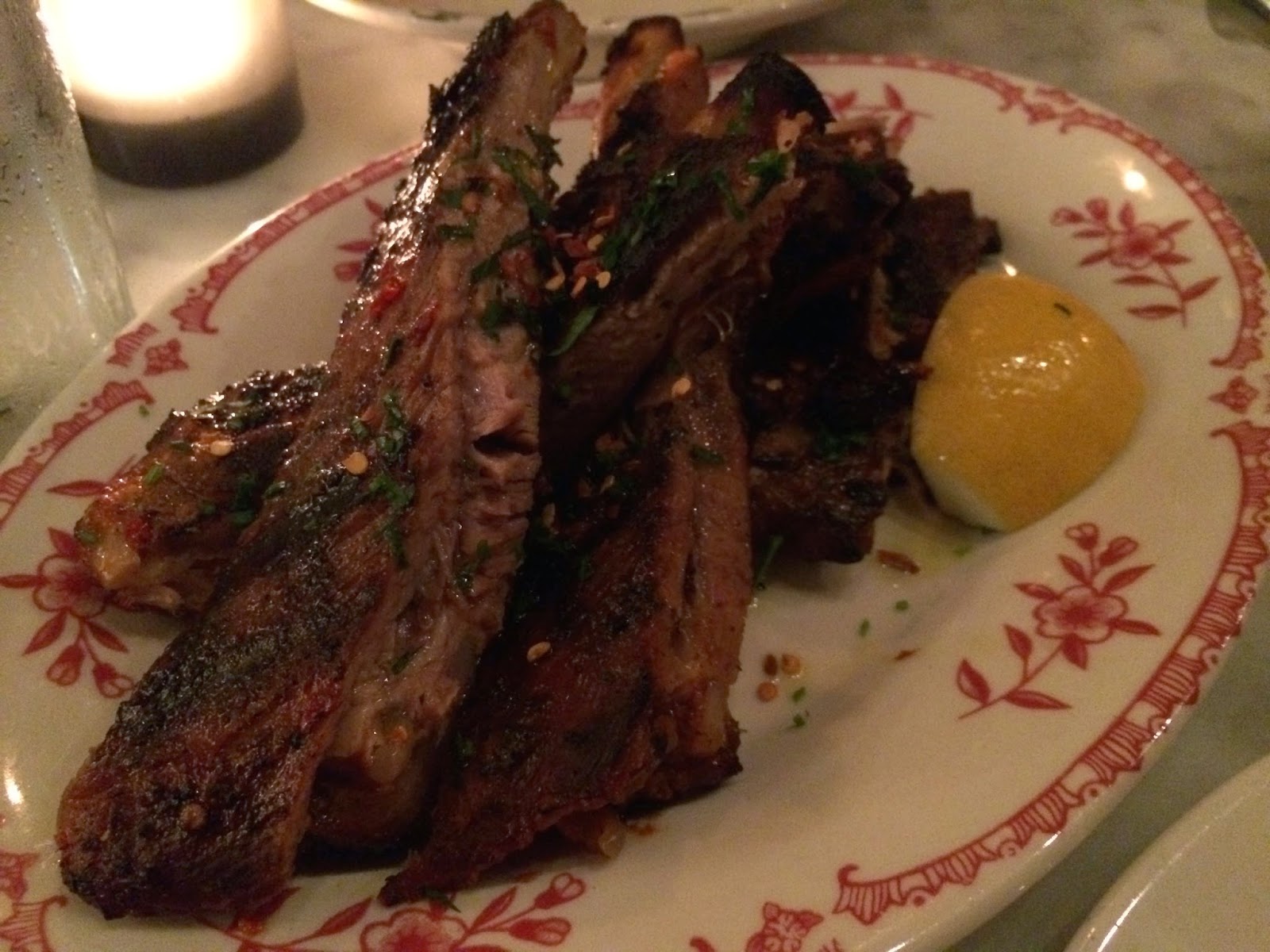 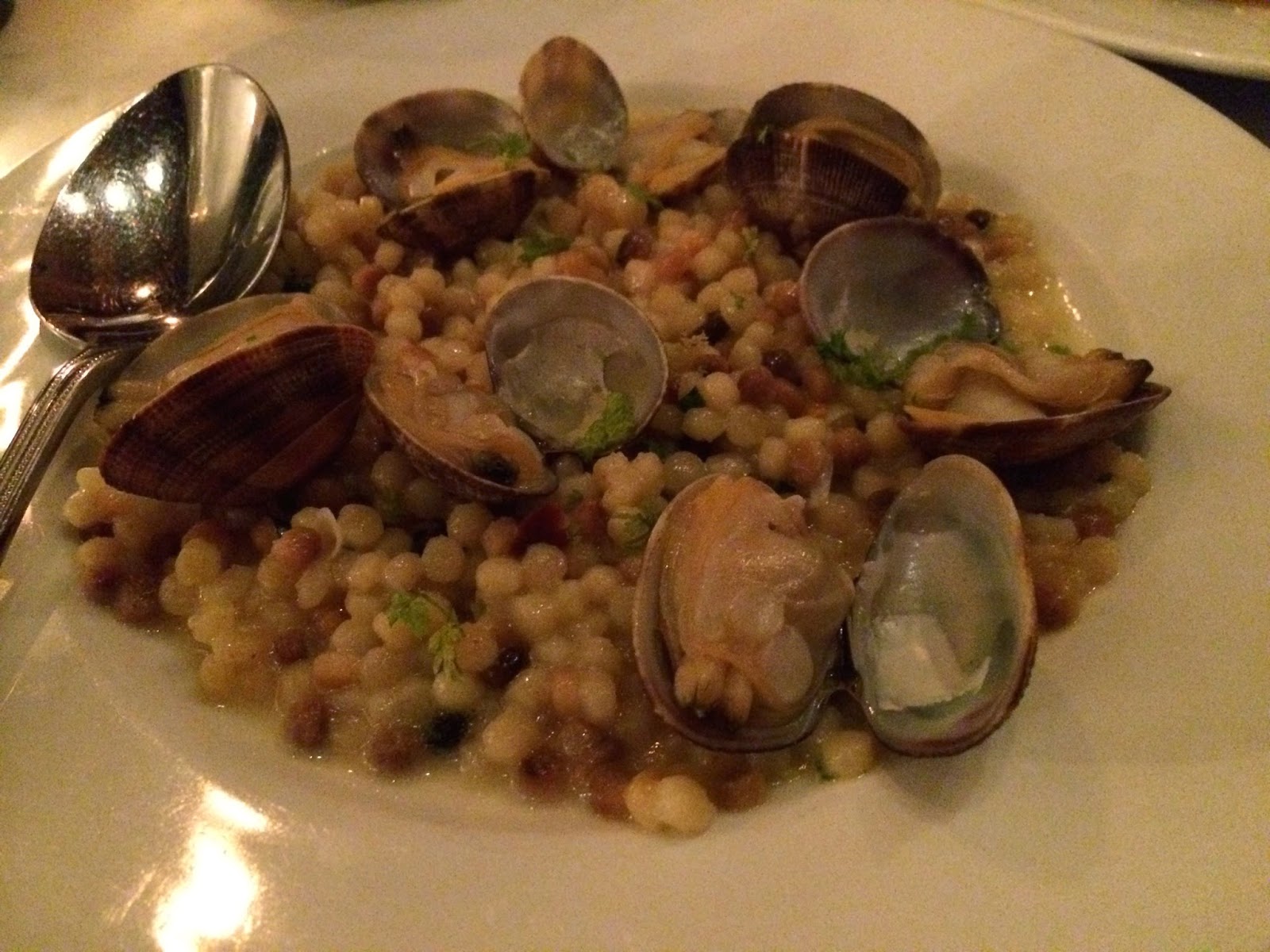 A couple of the larger entrees were the St. Louis style pork ribs (half rack) and the clams with fregola.  The ribs had a nice spice rub and didn't need any sort of wet BBQ sauce.  Unfortunately, I thought they were a little over cooked.  The ribs were super tender, but had no bite to them whatsoever.  Both Tiff and Emily enjoy fall-off-the-bone ribs so I was glad they loved that dish. 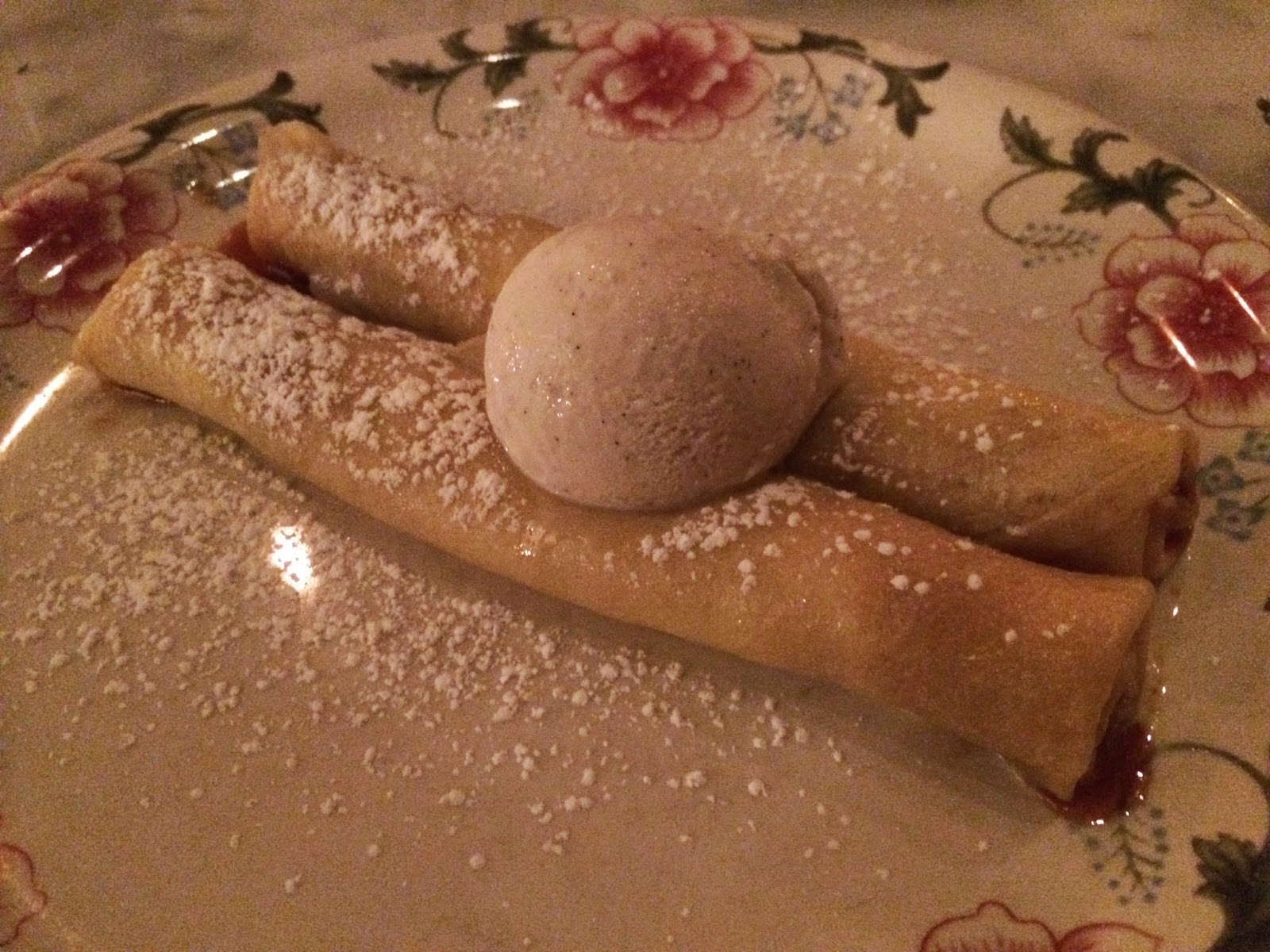 Finally, it was dessert time.  Somehow, Bar La Grassa offered about five desserts that I would have loved to try.  In the end, we all decided on the salted caramel crespelle.  This was an italian-style crepe filled with liquid salted caramel and rolled.  It was topped with vanilla bean ice cream and a dusting of powdered sugar.  When you cut into the crepe, the caramel oozes out like a volcano.  And, WOW!  The caramel actually has a slight saltiness to it, making it even richer and sweeter.  The ice cream is the perfect accompaniment to the warm crepe portion.  I loved the dessert and wished it was double the size.  Perfect ending to an already great meal.