A Quick Word:
One of the newest BBQ restaurants on the scene was brought to the UIC area by that same owners of DMK Burger Bar.  With such a powerful name behind the scenes, I was expected to be blown away.  And I wasn't.  The food, itself, was either hit or miss.  I loved the pulled pork sandwich, but was disappointed with our appetizers and sides.  The service for take out was extremely slow, waiting nearly double the time they said for our food to finally be complete.  The atmosphere of the restaurant (from me standing near the door) was very dark with a strong smokey smell filling the rooms.  (Definitely leave your jackets in the car!).  The prices are typical for BBQ joints, if not more on the higher side of the average.  Being around for less than a year, County just hasn't peaked yet and for the reasons I listed above, a 3.5 mile rating is all it will get.

UPDATE 6/18:
After giving County Barbeque another shot, I was pleasantly surprised with the better food.  The special of Adult Chicken Nuggets was wonderful and their bacon parfaits!  However, the rib tips were still pretty dry despite being full of smokey flavor.  They do have a nice patio, but that can't sway my original 3.5-mile rating. 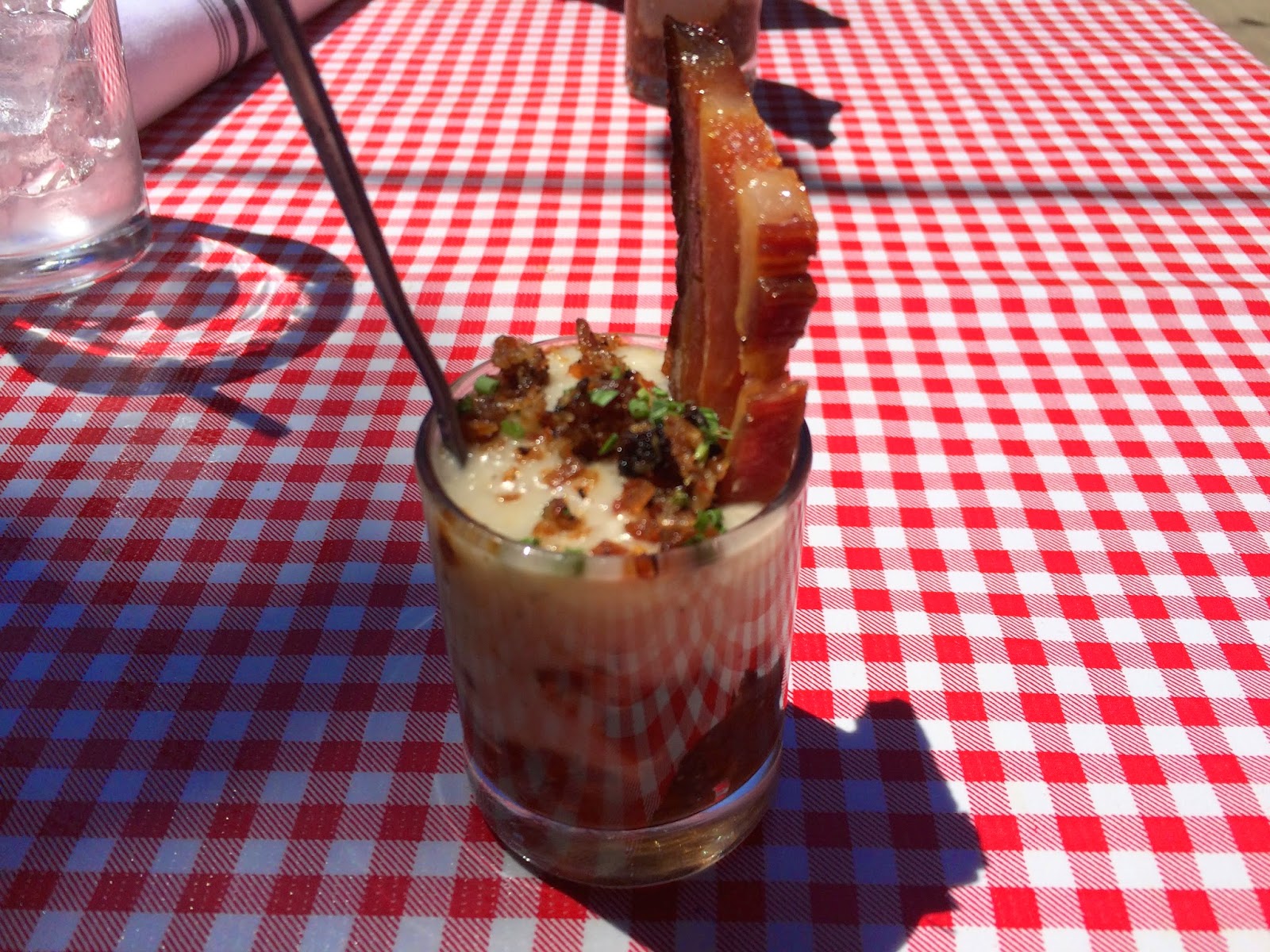 For just $3.00, you can get maybe the best parfait in the city... and yes, that includes all those ice cream places.  This is a savory parfait... Bacon and Barbeque.  What does that mean?  It starts with a layer of their baked beans, followed by chunks of pulled pork, then creamy polenta, and finally topped with both bacon bits and a thick slice of smoked bacon.  Honestly, I would come to County just for this small dish.  This just speaks BBQ.  Unfortunately, this wonderful flavors stop at the parfait and a lot of their other sides/appetizers don't make the cut.  Don't miss out on this incredible dish. 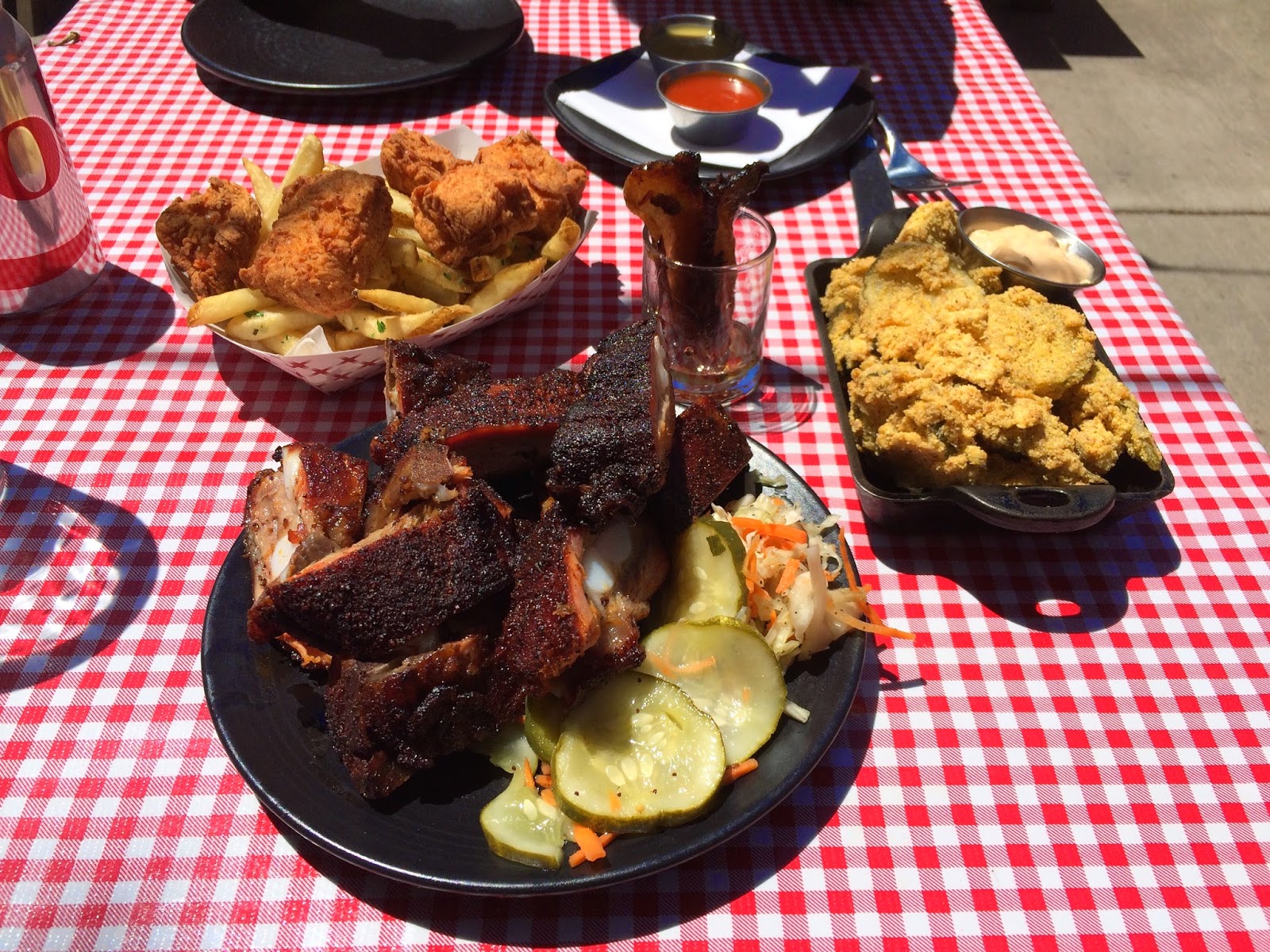 The special of the day was an adult chicken nugget.  These chunks of chicken breast are lightly smoked before being deep fried and served with a sriracha BBQ sauce and a horseradish honey mustard.  Garlic fries accompanied that dish as well.  I actually loved the chicken nuggets.  The sauces were spicy and were the perfect dip.  The fries were just fries and we didn't come close to finishing them.  Now for the fried pickles and okra... once again, their side/appetizer was a disappointment.  The cornmeal batter was flavorless and fell right off the pickles and okra.  Also, they give 10x more okra than pickles.  Don't order. 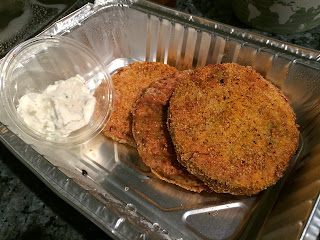 After glancing at the menu, the fried green tomatoes grabbed my attention.  Their version was made with thick cut green tomatoes that were lightly battered in corn meal before being deep fried.  They served it with a side of whipped goat's milk cheese seasoned with mint.  It sounds amazing right?  Well... it wasn't.  I just returned from NOLA and I was looking for amazing fried green tomatoes like I had at Jacque Imo's Cafe.  But here, I found the dish to be greasy, with only a flavor of corn meal.  The whipped goat cheese didn't even do the trick and I preferred not to use it.  I do not recommend this side dish unless you want to be disappointed. 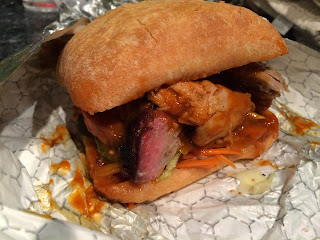 My friend decided to order the pulled pork sandwich... and I was glad she did.  This was the best part of the entire meal.  A ciabatta roll is split in half before being filled with a huge handful of pulled pork and topped with their cole slaw and homemade pickles.  They pre-sauce the meat with their carolina mustard sauce.  I loved this sandwich.  The pork had an amazing smokey flavor to it and rather than being pulled into thin strings, it was roughly pulled to have huge chunks of pork.  The BBQ sauce had a nice tanginess to it, probably from the mustard base.  There was an unusual sweetness to the sandwich, which we finally figured out came from their pickles.  For the perfect sandwich, take off the pickles and dip in their spicy BBQ sauce.  Amazing. 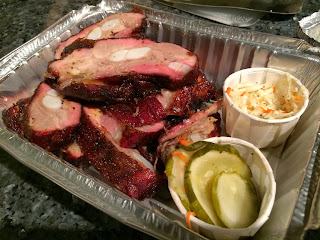 As you have probably seen from the other BBQ restaurants I have tried, I am a sucker for rib tips.  So naturally, I ordered the Chicago Rib Tip dinner.  It came with a healthy amount of slow smoked rib tips, an embarrassingly small side of cole slaw and a few pickles.  The rib tips had a very savory rub to them but weren't sauced.  An overwhelming smokey flavor took over my palate, but I enjoyed every bite of them.  Unfortunately, that deep smokey flavor left the rib tips dry and chewy.  Not only that, I was disappointed with the cole slaw.  First of all, no flavor... maybe I got the very top few pieces in the bowl?  Also, they use a ketchup container for their serving size.  One bite?  Really?  Couldn't believe they skimped that much. 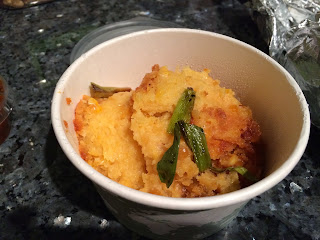 We decided on ordering one of their sides.  The most unique was their corn pudding.  I am an absolute fan of corn pudding so I had really high hopes.  Unfortunately, it didn't live up to its name.  Their corn pudding reminds me of corn bread that is not seasoned well.  It was made with cream of corn and grilled scallions.  I thought the corn pudding was soft, moist, and like I said, flavorless.  To make it better, I added some of the rib tip meat and BBQ sauce to the dish.  Now the dish was up to standard.  This side dish was better than their cole slaw.

The DOs/DON'Ts:
DO:
- I wanted to dine in for a few reasons.  First of all, they offer bar bites, such as BBQ parfaits and candied bacon.  Also, their dessert options include spoonfuls of cookie dough.  I suggesting dining in and will update this post once I do.
- Parking is difficult, some valet around the area, so maybe public transportation?

DON'T:
- If ordering take out, do not come early, in fact, do not come on time... I waited another 10 minutes on top of the half hour wait they estimated.

Posted by Joseph Esparaz at 8:29 AM