A Quick Word:
I have always been intrigued about Secret Supper Clubs and I finally had the opportunity to give it a try.  This secret supper was hosted by Dishcrawl and was held at Gallery Bar in the River North neighborhood.  As soon as you walk in, your eyes are immediately drawn towards the unique and amazing "street-style" art that filled the walls.  From graffiti to photography printed on aluminum, the art is one-of-a-kind! Anyway, back to the food... we enjoyed a 6-course meal with an amuse-bouche to start off the night.  Excellently paired with wine, we dined for a lengthy 3-hours (we thought it was too long).  The food itself tasted great, but some dishes contained ingredients that did not complement each other at all.  We were joined by other foodies in Chicago, meaning we could share our secrets and recommendations. After it was over, I understood the chef's attempt at Asian tapas... unfortunately, the theme that stuck with me more was cold food.  The location, experience of dining with other foodies, and the concept of a secret supper saved the restaurant and allowed me to give them a 4-mile rating.  But they have to step it up! 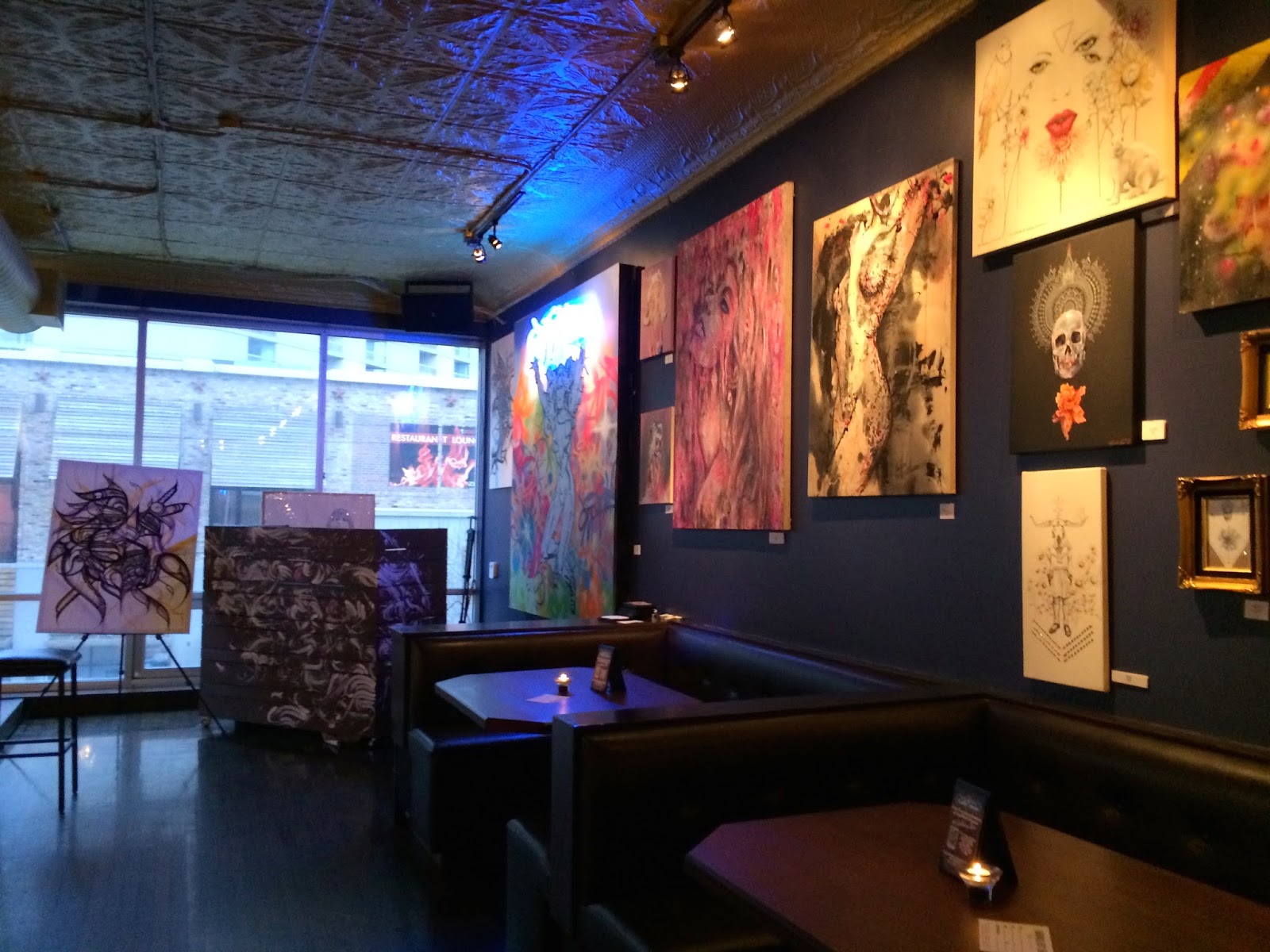 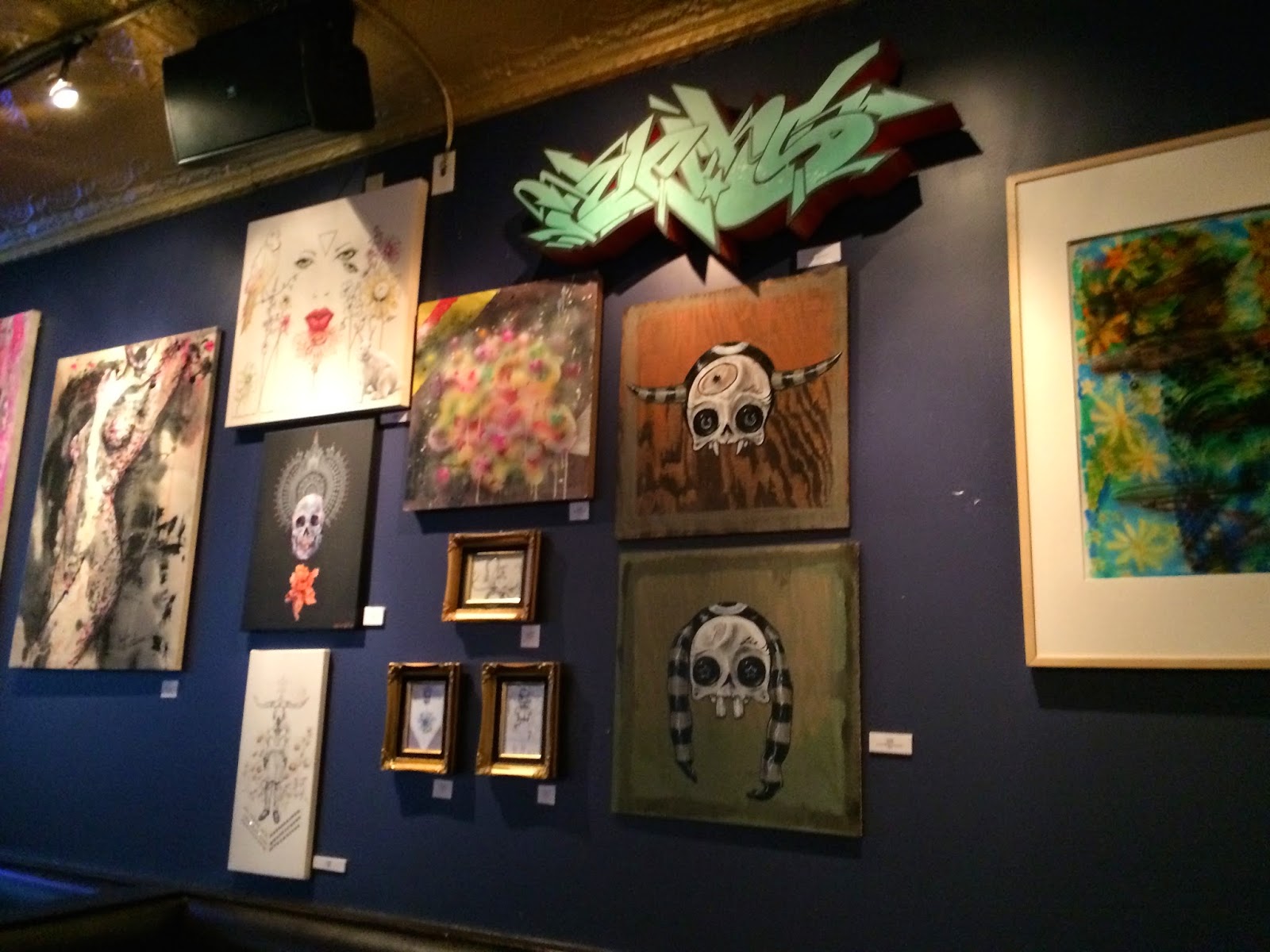 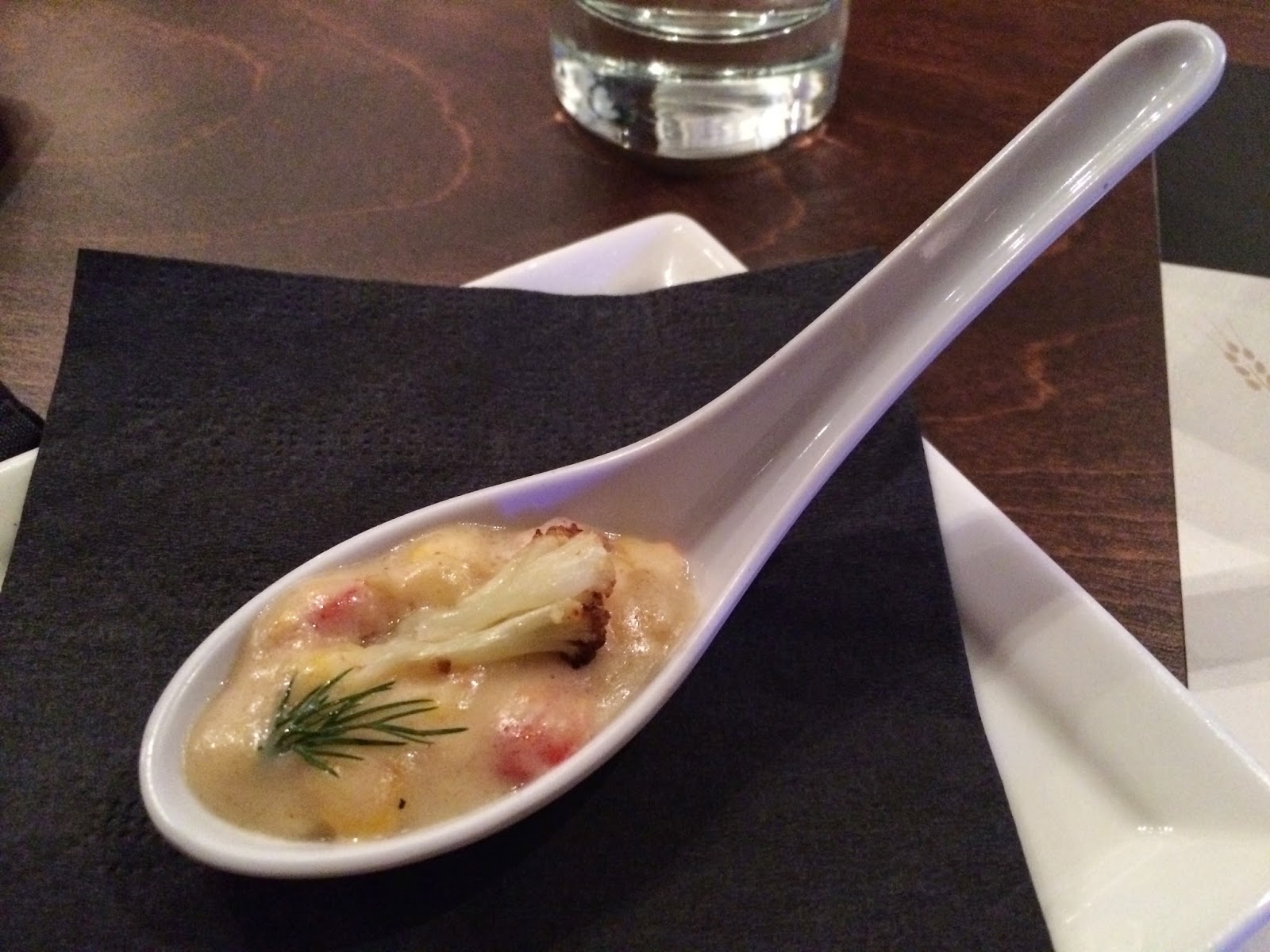 Our first bite was a salmon chowder.  Served in an Asian-inspired spoon, the chowder consisted of their house-cured scottish salmon, roasted cauliflower, and a few pieces of corn and red pepper.  The red pepper took over the dish, actually outshining the salmon flavor.  Unfortunately, this first bite was cold...  I looked over to the kitchen and discovered the lack of a food warmer.  What does that mean? I began to suspect a common theme would be present--subpar temperature. 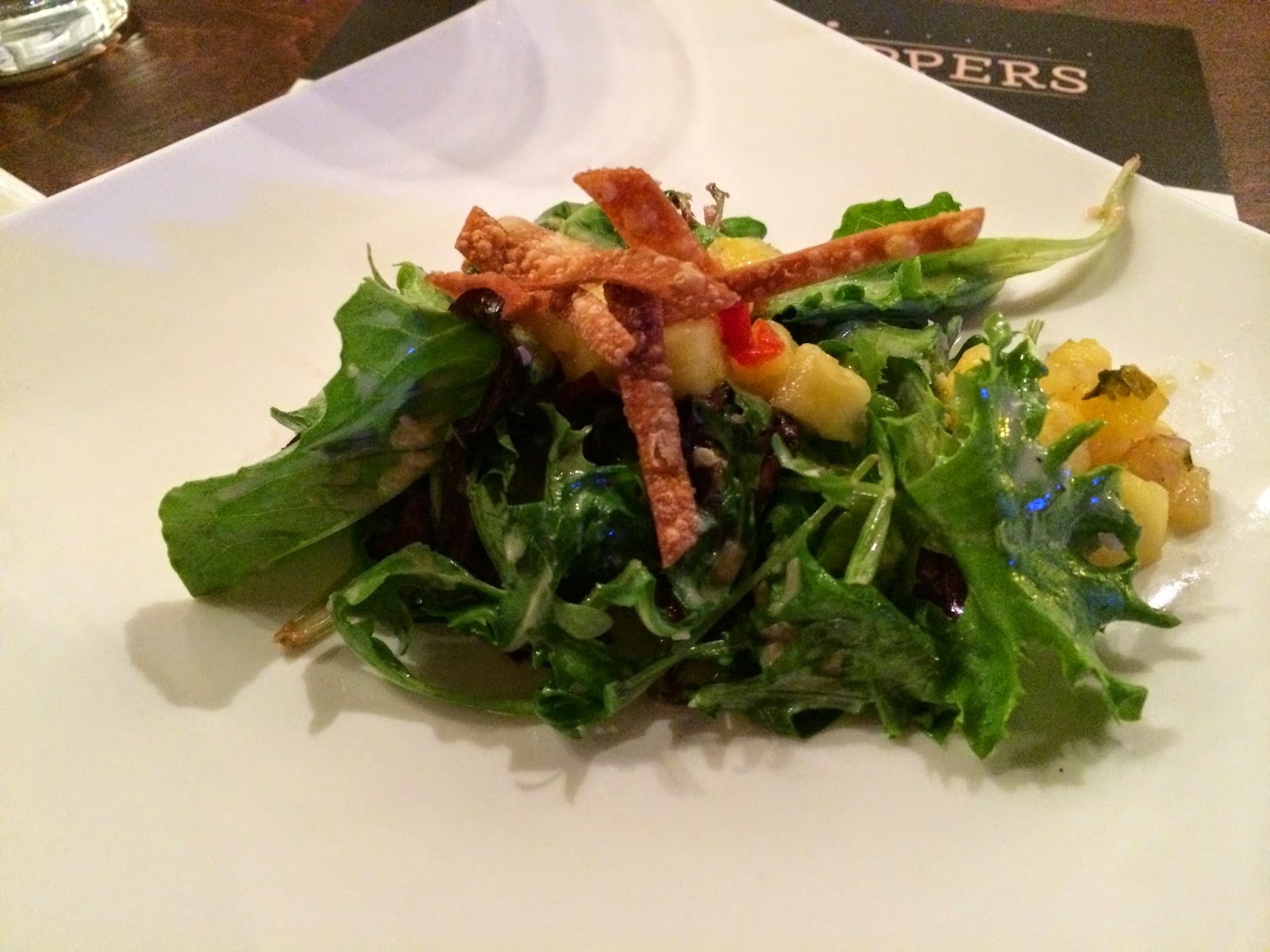 For the second course, we were given what they called a pickled ginger salad.  It was made with a mixture of arugula and spring mix veggies and topped with a wonderful mango salsa and crispy wonton strips.  Finally, it was dressed with a pickled ginger vinaigrette.  From the name of the salad, I was expecting something involving sushi flavors.  Instead, we had a wonderful tropical salad. There was contrasting textures, both sweet and salty components, and an elegant presentation.  Great salad course... I would come back for a larger version with some shrimp! 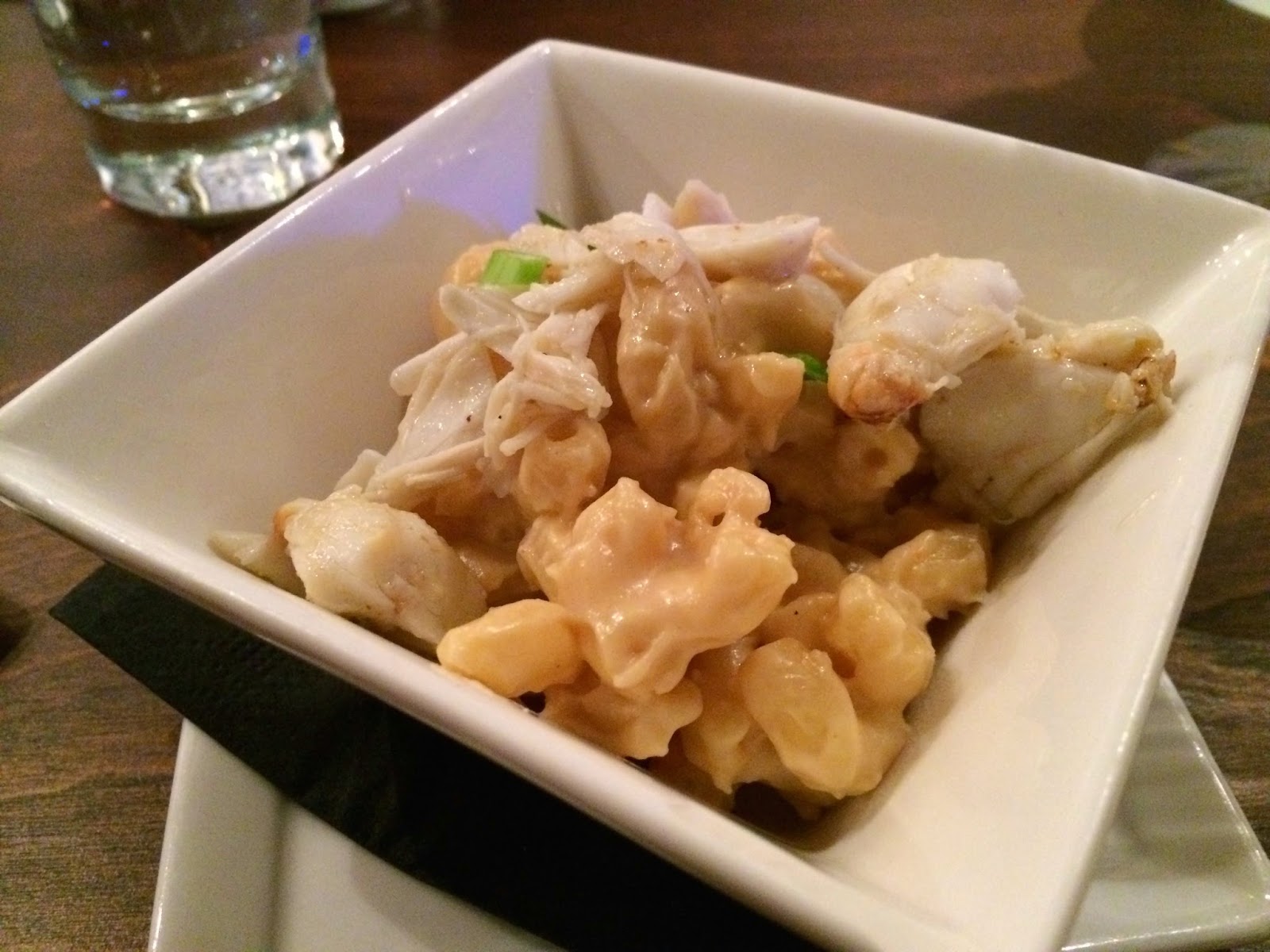 I snuck a preview of the pasta dish prior to the dinner and expected some kind of mac & cheese, but I wasn't expecting to involve seafood.  For our next course, the mac & cheese was made with a smoked gouda and gruyere cheese sauce before being topped with lump crab meat and scallions.  Sounds amazing right?  Unfortunately, I was disappointed.  First of all, the dish again was cold... in fact, the cheese had already thickened and almost curdled (trust me, everyone around me had cold food).  Anyway, looking past the temperature, I thought the cheese was too strong in terms of the smokey flavor.  It completely overwhelmed the crab and I wouldn't even know crab was present if I didn't see it.  The seafood flavor is very delicate and using such a strong cheese was a mistake.  This is my opinion, but others at our communal table thought the same. 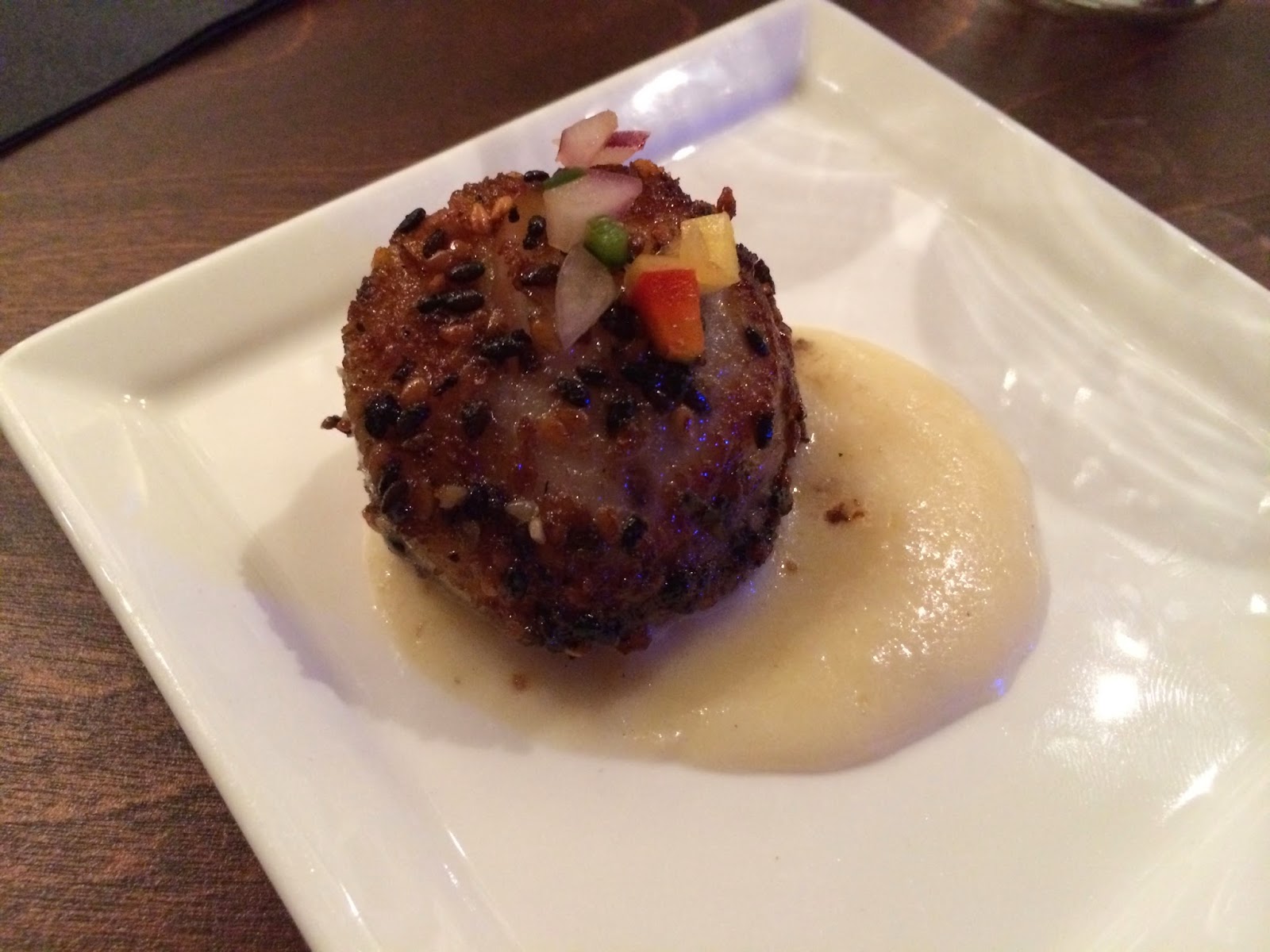 This was the time our meal took a turn for the better!  Our first of three protein dishes was simply put... EXCELLENT.  A large diver scalp was rolled in sesame seeds before being seared.  It was served on top of a mango sauce, but unfortunately lacked the menu-described seaweed salad.  The scallop was fresh and cooked to the perfect tenderness.  The sesame flavor was strong enough to get that asian-inspired theme.  But, the defining component of the dish was that mango sauce.  It was incredible... buttery, sweet, fruity, and a perfect pairing for a delicate scallop.  You could put that sauce on just about anything and I would eat it.  Delicious! 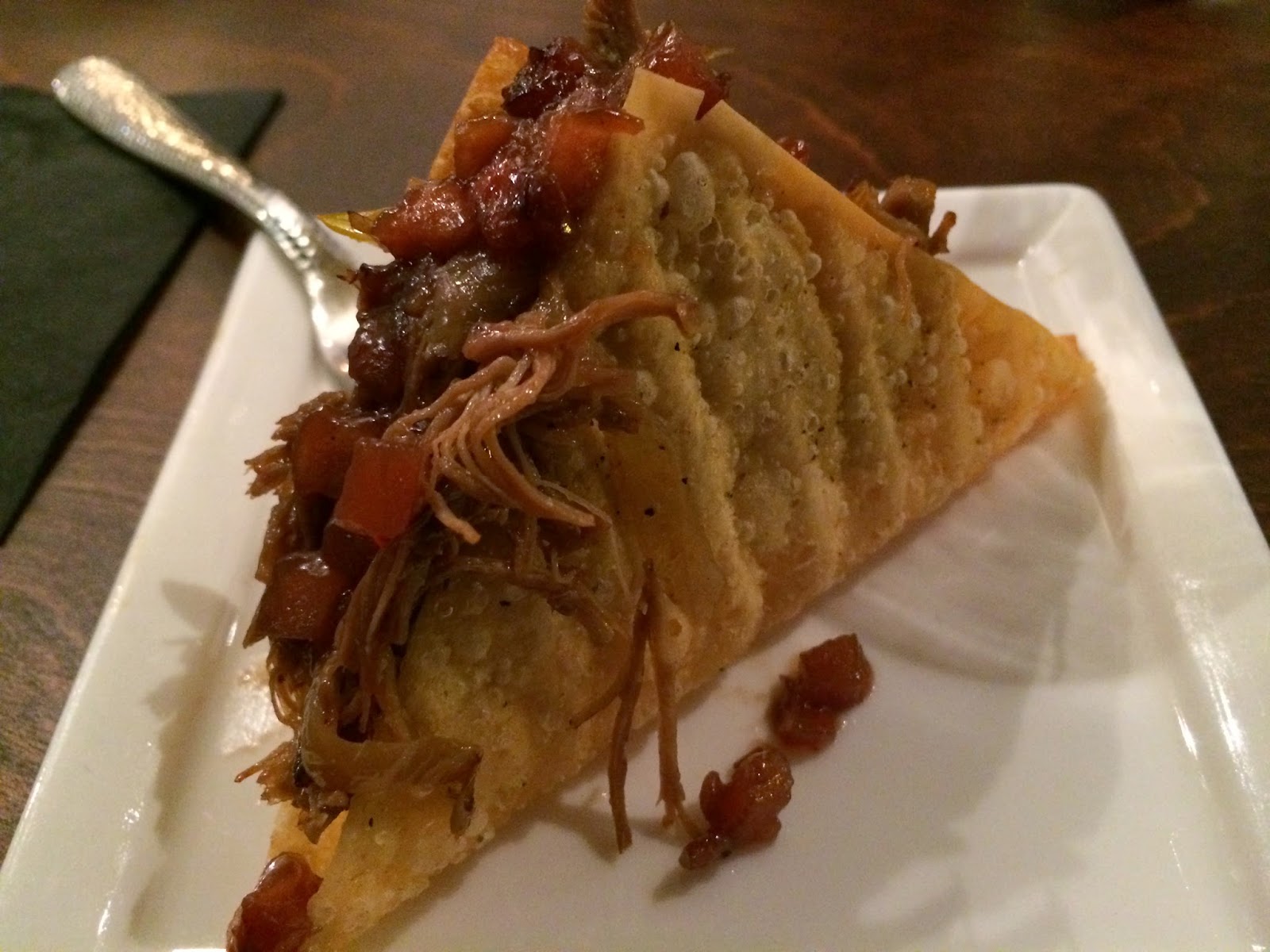 The trend of excellence continued with this asian taco.  The duck tart taco was constructed using a crispy wonton shell and then filled with braised, shredded duck meat before being topped with a cranberry and apple compote.  Again, the complexity of the dish was top notch.  The wonton wrapper was the perfect hard-shell for a taco, giving that nice crunch to the dish.  The duck meat was tender and the fruit compote was essentially a sweet salsa to top it all off.  The asian-theme was once again prevalent.  Only thing I wished was for another taco or even two! 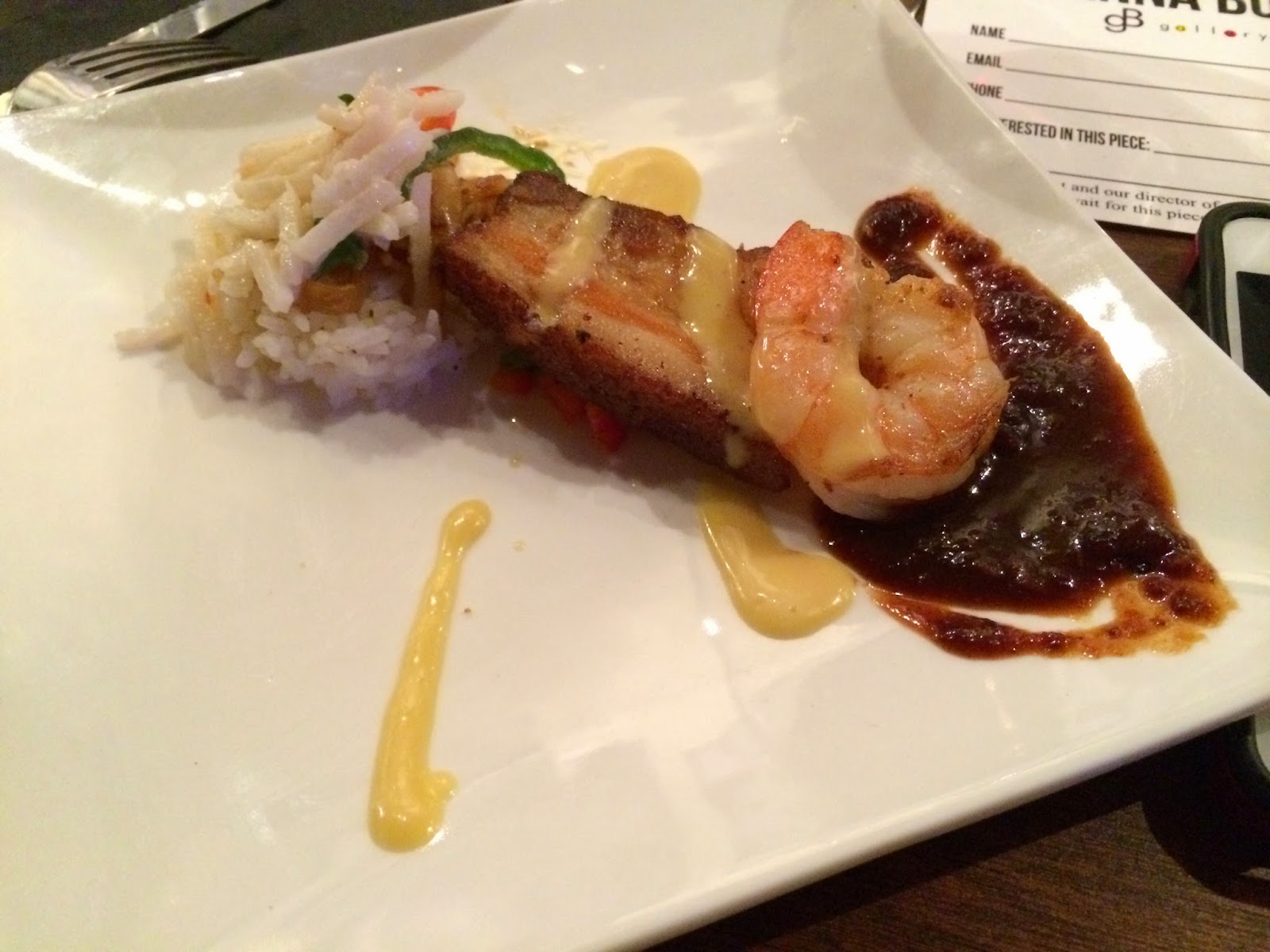 The last protein of the night was known as the swimming pig.  It was a creative name for a dish that consisted of crispy pork belly and a sautéed shrimp.  It was also served with a deconstructed fried rice and the same mango sauce that I praised above.  The picture I took was of my girlfriend's plate because the my dish didn't have any whatsoever.  This just shows the inconsistency in plating of the young chef.  Anyway, the pork belly was amazing.  Tasting like a thick cut of bacon, that sweet mango sauce helped mellow it out.  The shrimp was tender and not overcooked and the fried rice gave us enough carbs to fill our stomachs.  Once again, the menu was a little off... it described a tortilla encased shrimp which did not appear on our plates.  Temperature on this plate was a little better but still below average in my eyes. 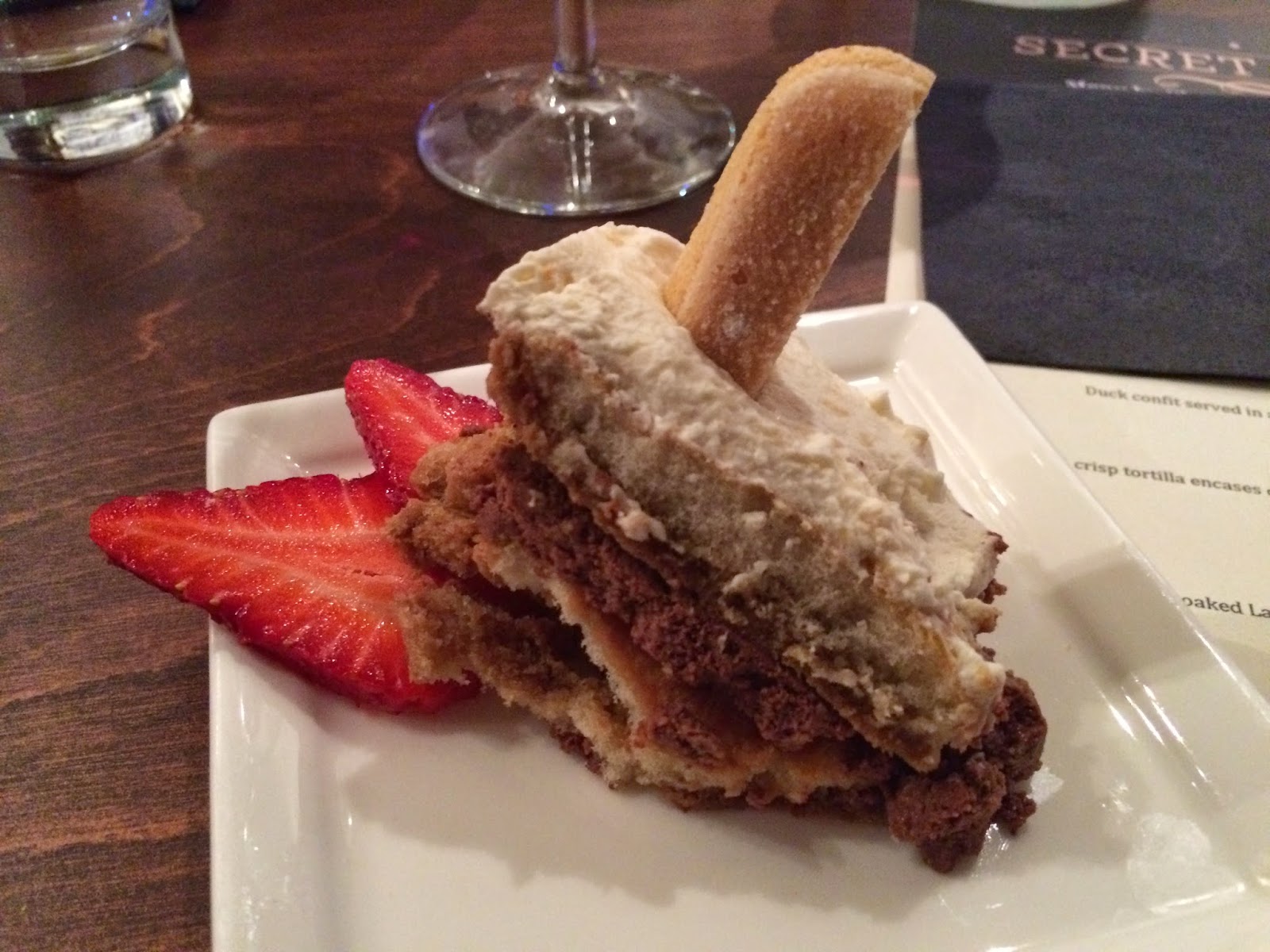 3-hours later... we finished the dinner off with a classic--Tiramisu.  How is this Asian?  It isn't, so was it a short-cut for an easy pre-made dessert?  Regardless, it was still delicious.  This chef's version was made with coffee soaked lady fingers, chocolate mousse, Grand Marnier, and a thinly sliced strawberry.  The liquor component was light and not overwhelming like you get at many Italian restaurant across Chicago.  The lady fingers and mousse had great flavors and enough sweetness to remind you of a wonderful dessert.  The strawberries were a little on the tart side, but that wasn't too much of a problem.  Good dessert... not Asian, but still good.

The DOs/DON'Ts:
DO:
- Stick with the proteins... the duck tacos are amazing and I highly suggest them!
- Check out their website for additional events.  Gallery Bar is known to host different artist themed events including street art wars.
- The art if FOR SALE!  So definitely take a stroll around the bar and enjoy it!

DON'T:
- I wouldn't order too many dishes per person.  When the kitchen is overwhelmed the food comes out cold.  Maybe order one at a time?
- Not much parking around, but it is just a few blocks from the Chicago Red Line stop.  I wouldn't drive unless you want a difficult time finding parking.