A Quick Word:
Without question, this place has one of the best, if not the best, deals in Chicago.  On Friday's, they offer $1 Falafel sandwiches... yes one dollar!  I was skeptical at first, but as you will see from pictures below, the sandwich is packed with fresh veggies, sauces, and falafel and is a great size!  Unfortunately, the other item I tried wasn't the best which brought down the rating.  Also, the overall flavor was on the disappointing size, but it still filled me up, so I can't complain too much. 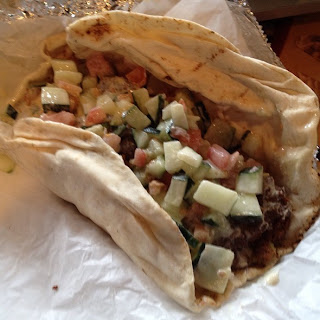 From 11am to 2pm, Babylon has this amazing and unheard of special.  I wasn't sure if this was some kind of trick... but it wasn't.  You don't need to buy anything else.  I would order two sandwiches and tell them to be light on the sauce or maybe get it on the side.  They tend to drown everything with the tahini sauce which isn't very appetizing.  The pita bread wasn't the softest and was more like a pita wrap than the typical pita pocket we are used to.  But once again, it is difficult to complain when a large meal only costs $1. 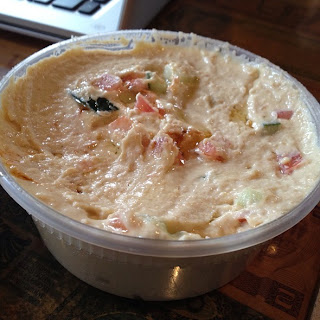 The hummus had tomatoes and cucumbers mixed in to it.  I do wish the hummus was creamier and tangier... it didn't have much of a bite or anything.  Also, it was a bit on the chunky side.  There was no salt or pepper added or any oil.  It kind of reminded me of mashed chick pea or "hummus making in progress".  The pita was once again on the tough side.  And for me, I didn't really enjoy it.  I would just stick to the dollar falafels.

The DOs/DON'Ts:
DOs:
- Do come for the Friday special.  But just remember it was only $1.

DON'Ts:
- On Fridays, don't order anything else... stick with the falafel.  On other days, try some of the other menu items and definitely let me know how they are.